Leclerc scorches to pole with late flier in Baku

Leclerc scorches to pole with late flier in Baku 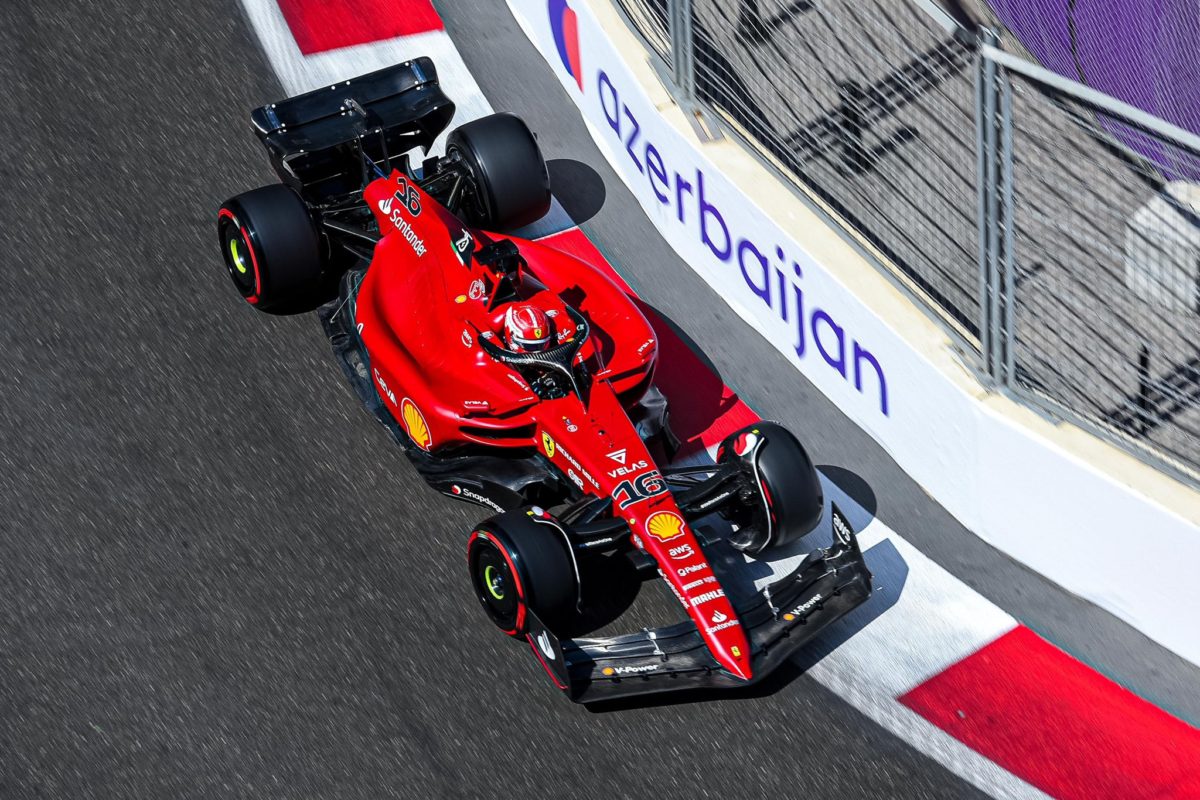 A stunning final lap from Charles Leclerc saw the Ferrari driver claim his sixth pole position of the season and second at the Azerbaijan Grand Prix.

Having battled for top spot throughout the session, Leclerc found another gear in the final moments of the session to claim pole.

Joining him on the front row will be Sergio Perez, the Mexican again having the measure of his world champion team-mate Max Verstappen, who will start third.

The start to Qualifying 1 was delayed by 15 minutes, a result of rules which mandate the session cannot begin less than two hours after the end of Free Practice 3, which had also been delayed owing to a crash at the end of the Formula 2 race earlier in the day.

It was a busy start, with cars queuing at pit exit to join the track.

Lando Norris was at the head of the snake, recording a comparatively pedestrian 1:45.061s which quickly saw him shuffled down the order.

A strong early lap from George Russell saw the Mercedes driver log the fourth best time, splitting the two Ferraris with a 1:43.781s.

Guanyu Zhou completed a 1:43.777s to slot in fifth fastest, the pace at the top of the timesheets having moved on.

Leclerc was fastest on a 1:42.865s from Verstappen with Sainz in third, and Perez fourth.

Russell had slipped to sixth, 0.004s slower than the impressive Zhou.

A mistake from Lance Stroll with three minutes remaining saw the Canadian nose into the wall at Turn 7, though he was able to carry on.

He did so for less than a lap before running wide at Turn 2, clouting the barrier to draw the red flag with 2:30 left on the clock.

The stoppage lasted 10 minutes before, another queue formed at pit exit well ahead of the restart.

Lewis Hamilton sat at the head of the line with Russell in behind him, while Daniel Ricciardo was buried in the pack, sitting a precarious 14th on the timesheet as the session restarted.

Following him was Norris, who was told to get his elbows out and overtake cars as he exited the lane.

It was a cagey affair with some drivers looking to get to the line before the chequered flag while others looked to spoil their progress to protect their own position in Qualifying 2.

All those who headed out made it to the line in time, however they were bunched such that they were all getting in one another’s way.

The pressure was released by Fernando Alonso, who ran deep at Turn 15 to draw the yellow flag, forcing everyone behind him to abandon their laps.

It meant the two McLarens progressed, as did Valtteri Bottas who improved with his final lap to squeeze out of the bottom five.

They were displaced by the Ferrari pairing, Sainz provisionally on pole with a 1:42.088s over Leclerc by just under a tenth of a second.

Sebastian Vettel found himself skating into the barrier at Turn 15, nosing into the Tecpro barrier in a similar manner to Stroll earlier.

It triggered a brief double waved yellow as he reversed the Aston Martin before recovering to the pits.

Inside the final four minutes, Leclerc rose to second best on a 1:42.046s, though Perez remained on provisional pole with a 1:41.955s

The Mexican had improved with his run midway through the segment, moving ahead of the two Ferraris before parking his Red Bull in the garage, confident with his time.

A late lap from Ricciardo saw the Australian rise to 12th as the chequered flag fell, one spot behind Norris, the duo split by a shy under 0.2s.

Also missing the cut were Esteban Ocon, Zhou, and Bottas.

Behind the top four, the order was Gasly, Russell, Vettel, Hamilton, Alonso, and Yuki Tsunoda after their first Qualifying 3 flying laps.

Perez was delayed prior to his final flying lap, the Mexican kept in the garage with dry ice used in the sidepods of the RB18.

It left him almost half a lap behind team-mate Verstappen, who in turn was some way behind the two Ferraris, who’d headed out early.

A sluggish final lap for Sainz saw him fail to improve, though he did make it to the line in time to go again.

Behind him, Leclerc was improving, the Monegasque recording a 1:41.359s to move into provisional pole.

Verstappen climbed to second, 0.3s slower than the Ferrari ahead, while Perez recorded a 1:41.641s to move ahead of his team-mate and join Leclerc on the front row.

Sainz was consigned to fourth with Russell fifth, then came Gasly, Hamilton, Tsunoda, Vettel, and Alonso.

The result marked Leclerc’s fourth successive pole position, and sixth of the season.