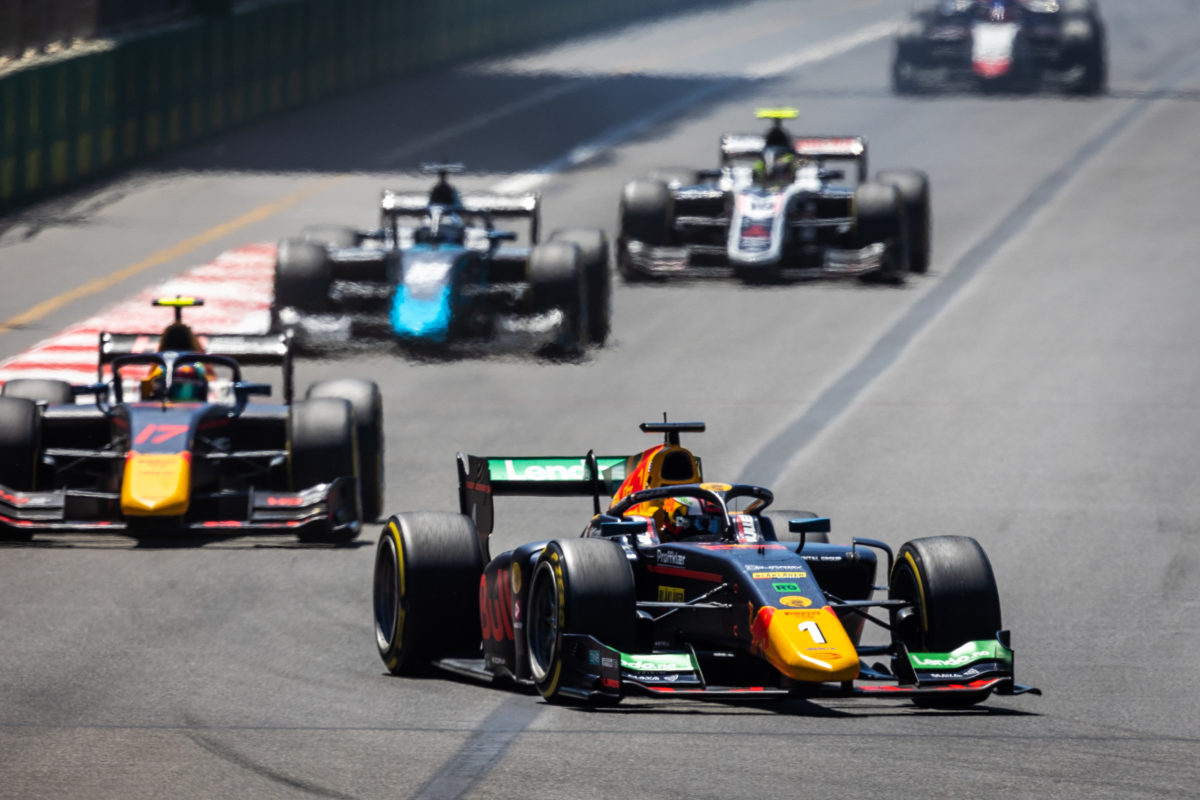 Dennis Hauger has won the Formula 2 Feature race under Safety Car conditions after Juri Vips crashed out just moments from the chequered flag.

The Red Bull junior led Logan Sargeant at the flag, Felipe Drugovich rounding out the podium while Jack Doohan crossed the line fifth but was classified 13th after a post-race time penalty was applied.

A clean start saw Vips head the field from Liam Lawson and Hauger as the race began.

In the pack, Amaury Cordeel and Oli Caldwell came together at Turn 4 while Sprint race winner Frederik Vesti stalled on the grid and was pushed into the pit lane, from which he joined the race.

The Safety Car was called as a result of the two stricken cars midway around the lap, their clash set to be investigated post-race.

Vips kept the speed low as he approached the restart at the end of Lap 3, the pole sitter accelerating just before he reached the final grip boxes.

Behind him, Lawson maintained second after seeing off a challenge from Marcus Armstrong, who’d got by Hauger before the Safety Car was deployed on the opening lap.

Having fallen to 12th off the start, Doohan climbed two places on the first lap after the restart to sit 10th, only to drop a spot when Theo Pourchaire found a way back through as they started Lap 6.

DRS was enabled on Lap 7, Lawson proving vulnerable in second as he sat too far back from Vips to gain the benefit, while the train behind him was within range.

It quickly made for a four-car scrap, with Richard Verschoor in sixth not far off the back of the quartet ahead.

At the end of Lap 8, a host of leading contenders took to the lane, including Lawson, Hauger, and Verschoor.

Hitech reacted, pitting the race leader next time around to cover off against those who’d taken service the lap prior.

Armstrong pitted at the end of Lap 10, feeding back out ahead of Vips into an effective race lead, though the pair swapped positions as they started Lap 12, DRS allowing the early race leader to regain the advantage.

Roy Nissany and Cem Bolukbasi crashed out at Turn 2 on the same lap, drawing the Safety Car for the second time in the race.

Ralph Boschung and Calan Williams had both yet to take their compulsory stops, the Australian leading as a consequence while the former served his stop under the Safety Car.

Williams therefore headed the field at the restart while behind him the two Hitech drivers made contact at Turn 1.

It saw Armstrong tumble down the queue, dropping to 17th while Pourchaire picked up damage to his front wing.

The Virtual Safety Car was called to clear debris which littered the front straight, racing resumed midway around Lap 17.

Still yet to stop, Williams remained out front until he locked up on approach to Turn 3, taking to the escape road on Lap 18.

Doohan climbed up to sixth with a move on Enzo Fittipaldi as they started Lap 19 while countryman Williams swapped his flat spotted tyres.

Doohan’s race then took a hit when he was awarded a five second time penalty for causing a collision with Lawson earlier in the race, the Aussie tagging the Kiwi as they rounded Turn 2 at the most recent Safety Car restart.

Things then settled down until, on Lap 23, the race took a dramatic turn as Vips crashed out as he negotiated the Castle section.

The race leader’s retirement came with just six minutes remaining in a race that had become time certain, the pole man tagging the inside wall at Turn 8, pushing him into the wall at Turn 9 and retirement.

Time was against a restart, and with the clock expiring the race did not resume, leaving the top three unchanged with Jehan Daruvala fourth at the flag with Doohan fifth – though his penalty coupled with the bunched field saw him plummet to 13th.

Armstrong was 12th, Lawson 15th and Williams the last classified finished in 16th.