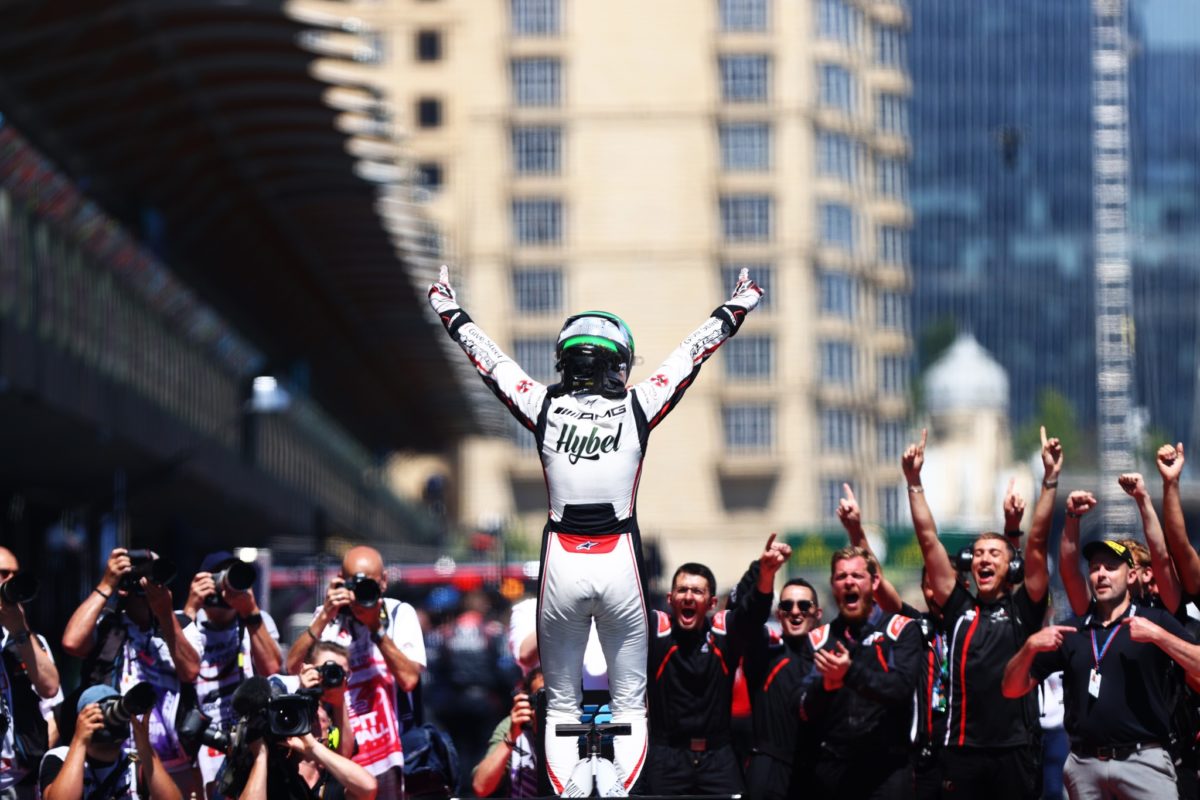 Frederik Vesti has claimed his maiden Formula 2 race win after a chaotic climax to the Sprint race in Azerbaijan.

Daruvala hung on to second while New Zealander Liam Lawson completed the podium.

Vesti took the lead off the line, only to cede the spot on the run to Turn 2, Daruvala moving up the inside to rise from third to first in the opening metres of the lap.

Also moving forward was Jack Doohan, who climbed one spot to 10th in the early exchanges, though appeared to pick up damage to his front wing.

By the end of the opening lap, pole man Jake Hughes sat second while Vesti slipped to third.

Next time through, Doohan had fallen victim to Dennis Hauger, falling back to 11th while nursing a damaged nose.

Indeed, his askew front wing caught the eye of officials who showed the meatball flag to the Australian, forcing him into the lane for a replacement.

Race leader Daruvala had moved clear of DRS range by the time it was enabled, while Hughes had a train forming behind him.

A strong move from Vesti saw him go around the outside at Turn 3 after an attempt into Turn 1 came to no avail.

He quickly inched away as Logan Sargeant closed up to Hughes to put a move on the Brit to take third by the time they reached the braking zone for Turn 1 as they began Lap 7.

Liam Lawson, Juri Vips, Dennis Hauger, and Theo Pourchaire all found a way by time around as Hughes plummeted out of the top 10.

Daruvala had extended a 3.4s advantage after the opening 10 laps, Vesti holding down second from Sargeant.

At the other end of the field, Doohan had climbed two places after he rejoined following a pit stop for a nose change.

His progress had stalled there, the Virtuosi driver more than 16s behind 19th placed Cem Bolukbasi.

Hauger made a mistake on Lap 14, locking up as he looking to put a move on Pourchaire for ninth at Turn 3.

He slid by the apex, burying the front right wheel in the Tecpro barrier and drawing the Safety Car.

It was bad news for Daruvala, who held a comfortable advantage, though a welcome development for Doohan as he caught the tail end of the field.

Racing resumed as the field began Lap 17, Daruvala accelerating late as he controlled the pack.

Sargeant lost out, Verschoor moving up the inside at Turn 1 while a host of cars ran off at Turn 2.

That saw Doohan move up to 15th as Vips slipped out of the points, taking to the escape road after Enzo Fittipaldi dived up his inside.

The Charouz driver picked up damage to the front-left wheel after tagging the wall as he skated off the circuit, drawing another Safety Car almost immediately.

It was a brief interruption with racing resuming at the end of Lap 17.

Daruvala again opted to restart the race late in an effort to deny second-placed Vesti a slipstream into Turn 1.

However, the Indian locked up into the corner, ceding the lead to Vesti before finding himself swamped at Turn 2.

He narrowly hung on, Verschoor’s race lasting only a handful of corners longer as he went side-by-side with Liam Lawson, nosing into the wall much like Hauger had earlier.

For the third time in quick succession, the Safety Car was called for with Vesti leading from Daruvala and Lawson.

With time running out, officials restarted proceedings with time for a final finsih to the 21-lap race.

Vesti was unchallenged into the opening corner while there was a big crash in the pack.

At the front, racing wasn’t interrupted, though yellow flags were shown in the first and third sectors.

The race was therefore effectively over two thirds of the way around the lap, Vesti winning his first Formula 2 race from Daruvala and Lawson.

The order was then Armstrong, Felipe Drugovich, Sargeant, Pourchaire, Ayumu Iwasa, Hughes, Roy Nissany, and Doohan, who recovered to 11th.

The Formula 2 Feature race gets underway at 17:05 AEST on Sunday.