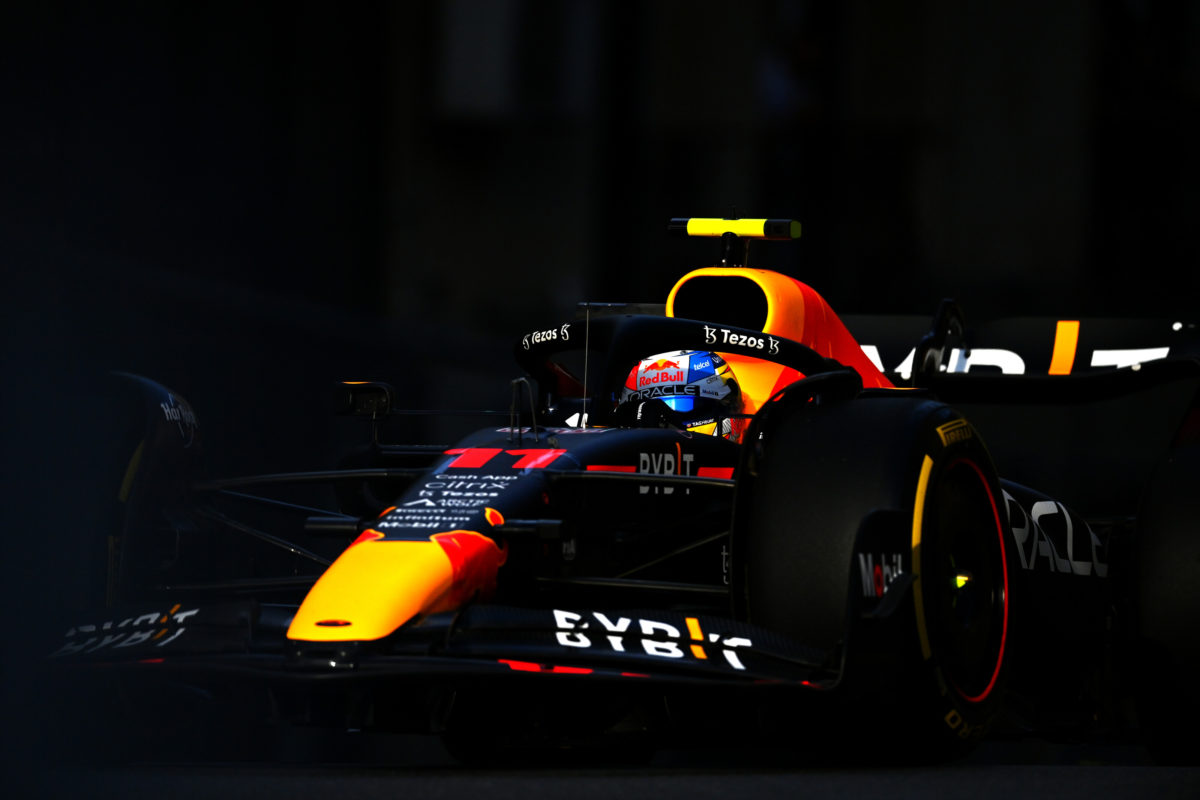 Sergio Perez has gone fastest in the final practice session prior to qualifying for the Formula 1 Azerbaijan Grand Prix.

It proved a combative session between the two top teams as they constantly exchanged fastest times throughout.

Proceedings were initially delayed by 15 minutes as repairs were made to the Tecpro barrier at Turn 1, the result of a crash at the end of the Formula 2 race which preceded the session.

It was a typically slow start once things did get underway, with only six cars heading out inside of the opening three minutes.

None of those initially completed a lap, in Mercedes’ case they looked to be roading tyres ahead of Sunday’s race.

More than 10 minutes had elapsed before the first time of the session was posted, George Russell logging a 1:47.256s on a set of soft compound tyres.

A number of others had by that point ventured out, with only the Red Bulls, McLarens, Williams, and Esteban Ocon remaining in the sheds after 15 minutes.

Having been slow to join proceedings, the Ferrari duo quickly rose to the top of the timesheets, first with Sainz on a 1:46.457s before Leclerc logged a 1:45.260s.

Behind the two Ferraris was Perez, who’d mustered a 1:45.503s, the only Red Bull driver to have set at lap to that point.

Verstappen finally headed out with 37 minutes remaining, the Dutchman the last to join the session.

A handy slipstream from Lando Norris saw Pierre Gasly rise to fourth fastest on a set of hard compound tyres, the Frenchman topping 345km/h down the long front straight thanks to the McLaren ahead.

The bulk of the field were on the soft tyres, Daniel Ricciardo a notable exception on the medium rubber.

Despite that, the Australian sat ninth fastest with a 1:46.329s, faster than team-mate Norris who was one spot further back on a set of softs.

Shortly after Verstappen joined the session, both Ferrari drivers found in the region of half a second a lap.

Perez hit back with a 1:43.886s to split the two scarlet machines, before Verstappen managed a 1:43.653s to join him in the Ferrari sandwich.

The 2021 world champion lost time in the final sector by having nobody to pick up a tow off.

A lull fell over the circuit shortly after the halfway point and only ended with just under 20 minutes remaining.

That saw improvements for Kevin Magnussen, the Haas driver slotting in fifth fastest with a 1:44.919s until Russell went faster, managing a 1:44.573s.

Leclerc too improved, the Ferrari driver going 0.1s faster than he’d previously managed with a 1:43.240s.

An off for Valtteri Bottas drew the yellow flag at Turn 3, interrupting Verstappen’s late flying lap.

After a three-point turn, the Finn was able to rejoin the session with no harm otherwise done.

With seven minutes remaining, Perez went fastest with a 1:43.170s, 0.07s quicker than Leclerc had managed.

Behind the top two teams, Norris improved to fifth fastest with a 1:44.418s, marginally faster than Ricciardo who set a 1:44.476s on a set of the soft compound tyres.

In the final moments of the session the circuit proved especially busy, with all but Lance Stroll on the track.

That led to something of a traffic jam around Turn 12, baulking Verstappen on a flying lap as he encountered a slow moving Fernando Alonso, who’d just allowed Ricciardo through.

The session ended with Perez fastest from Leclerc, Verstappen, Sainz, Norris, and a promising performance from Ricciardo.

Rounding out the top 10 were Gasly, Russell, Esteban Ocon, and Sebastian Vettel, while Lewis Hamilton was only 12th after Mercedes opted to turn his power unit down to save life on the engine.

Qualifying follows, beginning at 00:15 AEST, the 15-minute delay caused by the Formula 2 crash having a knock on to the session.