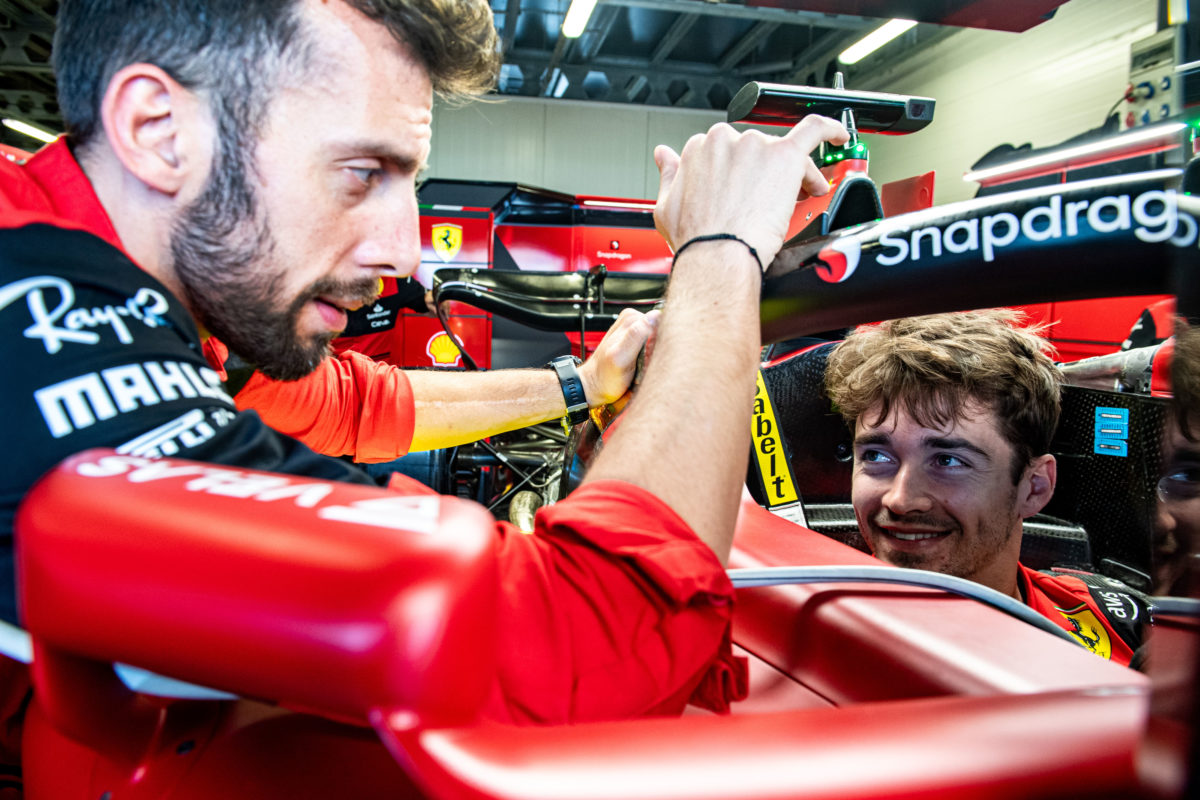 Charles Leclerc set the fastest lap in a Free Practice 2 session that offered a confused pecking order due to yellow flags.

The Ferrari driver was 0.2s up on Sergio Perez, who was in turn a tenth better than Max Verstappen, though the latter’s qualifying simulation was ruined by his team-mate.

Carlos Sainz had his flying lap interrupted too, leaving the Spaniard only fifth behind Fernando Alonso.

The session began at 18:00 local time, analogous to the time qualifying will be held on Saturday, with conditions having dramatically changed from Free Practice 1.

Not only had the shadows grown long across the circuit, but the track temperature had dropped more than 10 degrees, with ambient down by a couple.

At Red Bull, work was under way on the rear wing of Max Verstappen’s car, the top plane of which was seen flapping during opening practice, delaying his entry into the session.

It was in fact reverting to the same spec wing as was used on Perez’s car, the Mexican having not suffered the oscillation issues earlier in the day.

In the early moments of the session, Lando Norris had a moment under braking into Turn 3, the McLaren driver taking to the escape road where he completed a three-point turn before rejoining.

Mick Schumacher was out on track early after Haas repaired the leak he suffered from in the day’s earlier session.

With the help of a slipstream by Perez, Lewis Hamilton went fastest early on with a 1:46.295s.

It was a time that didn’t stand for long, Sainz lowering the bar to 1:45.118s to move to the top of the standings.

The bulk of the field were out on the yellow-walled tyres, only the two McLaren drivers opting for the hard rubber.

Next to go fastest was Leclerc, the former championship leader logging a 1:43.806s, aided by a tow on approach to the line.

That became second after 20 minutes when he recorded a 1:43.931s, less than a tenth off Leclerc’s pace from earlier in the session.

As the Mexican did so, Williams switched its duo onto the soft compound rubber as they begun work on qualifying simulations.

Verstappen was still on the medium tyres, the Dutchman recording a 1:43.836s while pushing his own air.

With 35 minutes remaining, the bulk of the field switched its focus to soft tyre running.

Leclerc improved to a 1:43.224s on his first qualifying simulation run, though without the benefit of a tow as he’d enjoyed earlier.

Sainz was set to improve on his own effort before bailing out of his lap after locking up at Turn 16.

A strange mistake from Alex Albon saw the Williams driver brush the apex wall on the kink at Turn 17, immediately heading into the lane and climbing from the car.

Perez and Leclerc both had moments, the former going deep at Turn 1, while the Ferrari pinched the front brakes in Turn 7, both aborting the corners.

Another mistake for the Red Bull driver interrupted laps for both Verstappen and Sainz.

The Monaco race winner had taken to the escape road at Turn 15, bailing out of the left-hander for feat of tagging the inviting barrier on its exit.

Though his lap was ruined by the resulting yellow flag, Verstappen remained on track.

Soon after he delivered a 1:43.580s, a time compromised by having to use set of old tyres, versus the new rubber of those ahead.

Sainz too sat in the same boat as he too had to abandon his lap, making the 1s deficit to his team-mate misleading at very least.

Indeed it was a muddied image of the pecking order at the top end of town, with Red Bull seemingly holding a slight edge over Ferrari though that not being reflected on the timesheets.

The final 10 minutes saw focus switch back to longer run pace, a mix of tyre compounds in use.

Most teams opted to split their drivers across compounds to gather data, the soft and medium compounds preferred, though Daniel Ricciardo was on the hard rubber for McLaren.

The session the ended with Leclerc fastest from Perez, Verstappen, Alonso, and Sainz.

Rounding out the top 10 were Pierre Gasly, Russell, Yuki Tsunoda, Esteban Ocon, and Lando Norris, with Daniel Ricciardo 0.2s slower than his team-mate in 14th.

Free Practice 3 follows on Saturday, getting under way at 21:00 AEST.