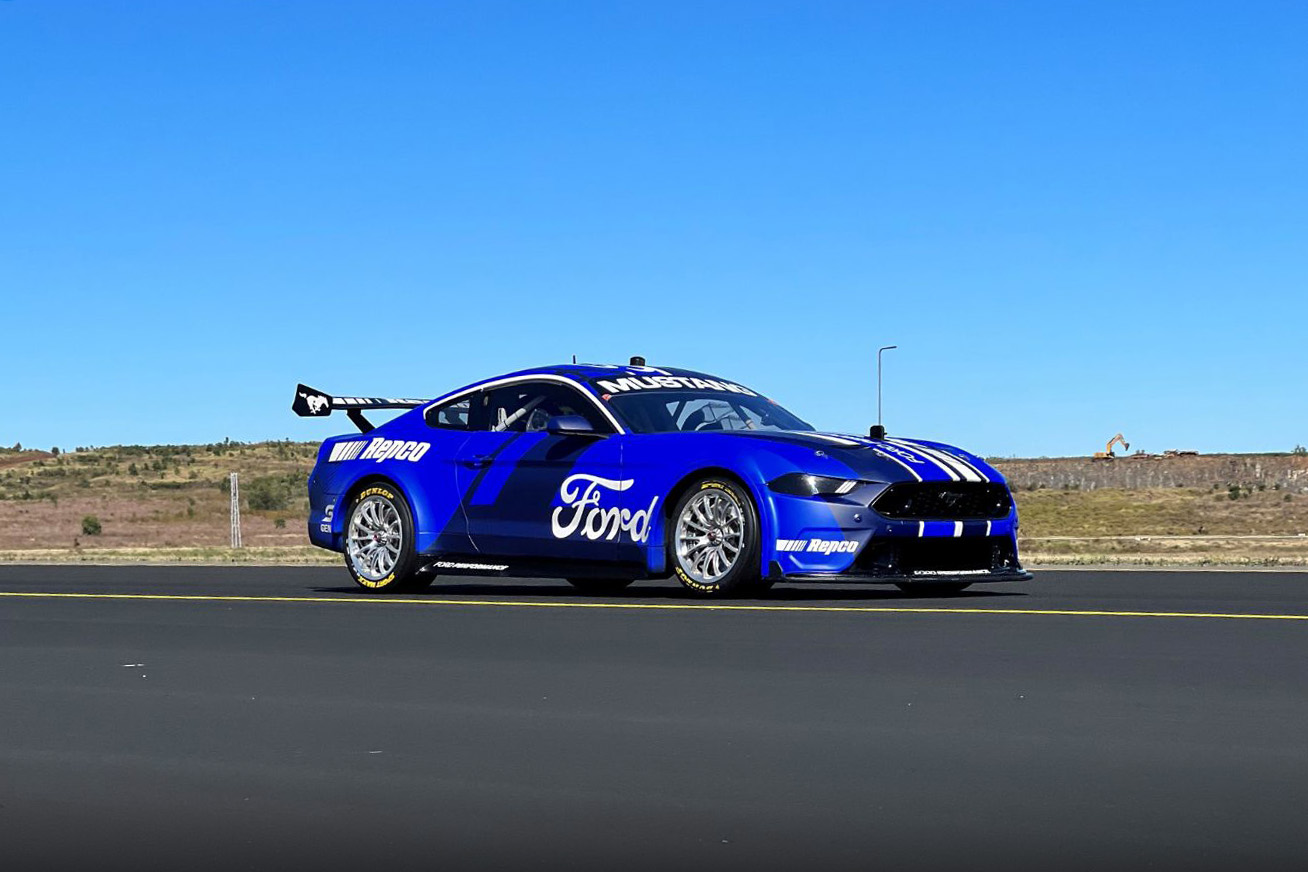 The VCAT marked the next step in Supercars’ journey to the racing rollout, which is slated for the streets of Newcastle in early 2023.

Computational fluid dynamics (CFD) and artificial intelligence (AI) will be correlated with real-world testing, using an active ride-height control system on each of the cars.

Early indications are positive, although there is an asterisk attached to the test given the Ford Mustang will be given a facelift before the year it is out.

“So far, this week, we’re very much encouraged with where the two cars are,” said Burgess.

“They’re in different configurations, so we expect that, but the numbers are equally backing that up. At the moment, we’re seeing good correlation between real-life numbers and what we’ve been working with in CFD, which gives us confidence that we’re on the right track.

“When we get to the real VCAT hopefully the process will be short and easy because we already know the cars are very close together in terms of their performance.

“When we get back from here, we’ll review all the data, the guys in the UK will be looking at it. There may be some post-processing that you do and we’ll recheck the calibrations of all the loadcells, just to make sure all the numbers we got are accurate and we believe them. It’s a big process We’ll turn our attention after this back to track running.”

This week’s “mini VCAT” allowed Supercars and its homologation teams a chance to get reacquainted with the process. A full-blown VCAT is expected to take place later this year.

The process, which puts the cars through various ride heights at speed, ensures that the two makes and models have aerodynamic parity between them.

“What that process really is trying to deliver is at the end of it – you’ve got two brands, or it could be three or it could be four, in this case, we’ve got the two; the GM and the Ford – we leave the VCAT where we know we’ve got the aerodynamic performance and drag performance of both cars paritised to within one or two kilos is what we did before, which in real racing terms is a very small number,” Burgess explained.

“It wouldn’t have any effect on the race. So what we’re trying to achieve is the same front downforce, the same rear downforce, the same total downforce and the same drag. We do that through a variety of different runs, different configurations of the car, we will also run the car through – I think the last VCAT we chose nine different ride height combinations.

“We go through a whole ride height map and we equally map the aero package in those positions as well. All that information is put together and its communicated out to the teams just so the teams have got the same info that the two homologation teams and Supercars has generated.

“We’re trying to give everybody the same ability to do the job and understand the car to the most accurate detail. At the last VCAT, we had all of those metrics within two kilos, which is the target.

“We’re here, we’re just refreshing ourselves with all of our processes, all our software, all our calculations that are used, putting the two homolgoations teams and my guys back into that headspace into that mentality of what we’re doing, sharing out data back to the UK with D2H, and those guys are supporting us in real-time, so they’re up in the UK in the middle of the night checking through data, making sure all these workbooks and calculations are precise and accurate.

“It’s a good test for everyone, just to get us back in that mode. Equally, what we’re doing as well, at the same time, we’re getting some correlation now from the Gen3 car that will go back to D2H and he’ll compare that to the CFD model we’re running.

“CFD is great, it’s one thing, but real life full car, engine, gearbox, the mechanical drag, all these things is sometimes different. It’s always good to correlate the actual real life numbers with the numbers you’re working with in CFD.”

Supercars is planning to have its Gen3 prototypes at its upcoming events.