Indigenous flair for Winterbottom in Darwin

Indigenous flair for Winterbottom in Darwin 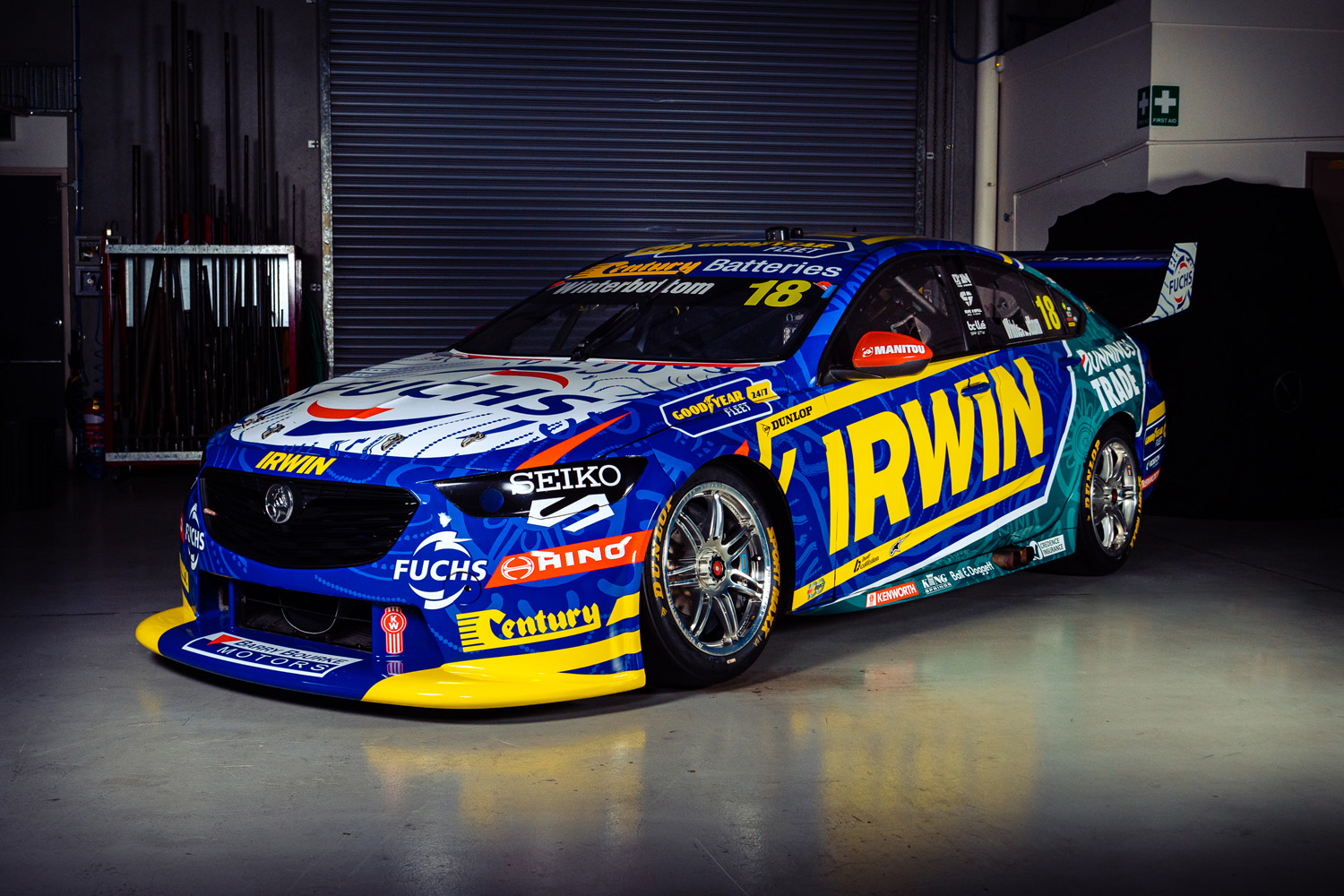 Team 18 has unveiled the first of its liveries for the inaugural Supercars Indigenous Round at Hidden Valley Raceway.

The design is the work of Kalkadoon artist Chern’ee Sutton, whose portfolio includes creating the jersey for the indigenous NRL All Stars team.

Sutton was also responsible for the artwork and story of Borobi, the 2018 Commonwealth Games mascot.

She has also worked with the likes of the AFL, NBL, Cricket Australia, Tennis Australia, and FIFA for its forthcoming Women’s World Cup.

“I’m incredibly proud and honoured to design the Irwin Racing indigenous livery, it’s such an amazing event and very exciting to be a part of,” said Sutton.

“I can’t wait to see the car racing around the track and the fact that Supercars have taken the extra step in using indigenous designs and artists makes me feel extremely humbled and proud to be a part of it.

“I was so overwhelmed when I saw the car in real life, the photos looked amazing but they didn’t do it justice until you see the detail of the artwork on the car itself, it’s incredible.”

Winterbottom met with Sutton this week where the pair got their first glimpse of the #18 in its new cloth.

The car will remain in its new livery for the Townsville 500 on July 8-10 which follows to coincide with NAIDOC Week.

“I love the look of the car and it’s a special time of year where we get to celebrate our strong indigenous culture in Australia which is fantastic for Supercars to be a part of,” said Winterbottom.

“We’ve had a lot of detail put in this car, it looks fantastic and the story behind the artwork on the car is really cool as well, I’m honoured to represent it and hopefully I represent it well and put this car up the front.

“It was great to meet Chern’ee Sutton, she’s a very talented artist and to see the time and effort that is put into the artwork that she does and the amount of hours they spend is incredible.

“It was amazing to hear her story, she’s been involved with Bunnings previously and even the Commonwealth Games, NRL All Stars, the Essendon footy club and now a Supercar. 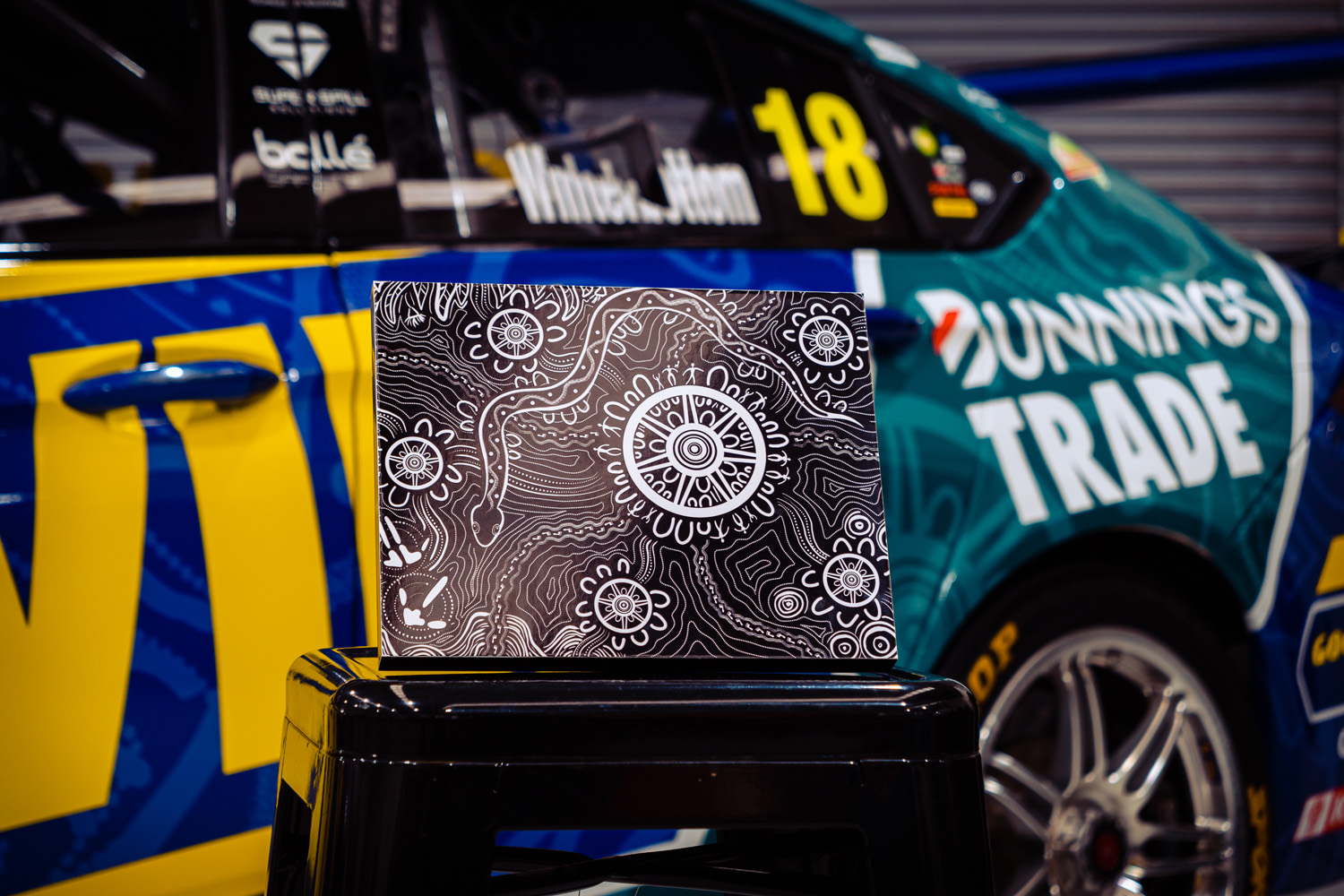 Chern’ee Sutton’s artwork which the livery was based upon

The meaning behind Chern’ee Sutton’s artwork:

The smaller community symbols which are connected to the larger community symbol through travelling lines represents all of the spectators and supporters who will travel from all around Australia to watch the event, from the dessert and the outback, represented through the mountains in the bottom left, to the rainforests and the bush represented through the leaves and flowers in the top left, to the coastlines and waterways, represented by the waterholes in the bottom right, while the dots which surround these community symbols represent the supporters who will be watching the event from home.

The footprints leading to the large community symbol represent the drivers and their teams travelling to the event in Darwin, while the rainbow serpent represents Aboriginal and Torres Strait Islander culture and history which has been a part of Australia for the last 65,000 years as well as paying homage to the traditional custodians of the Darwin area, the Larakia people.

The Kangaroo and emu footprints represent how the Irwin Racing team are always moving forwards and never backwards, just like the kangaroo and the emu.