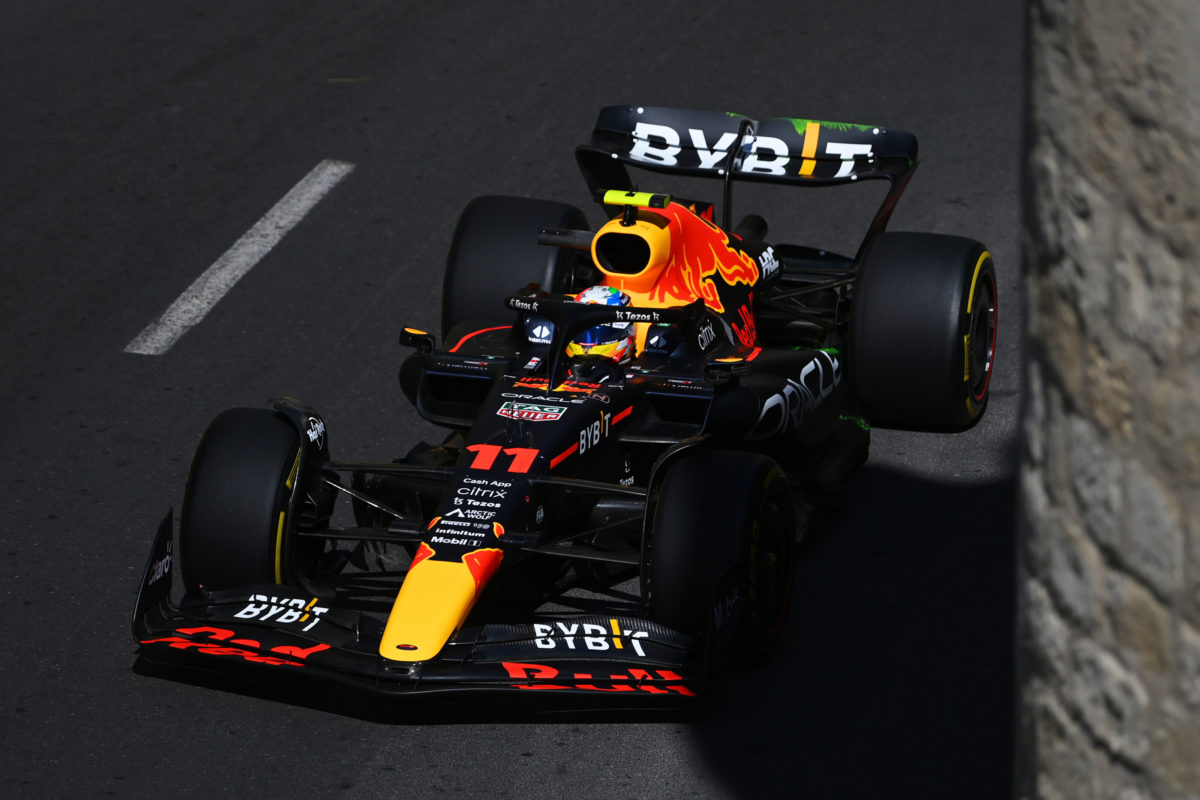 Sergio Perez has continued his strong run of form by setting the fastest time in Free Practice 1 for the Formula 1 Azerbaijan Grand Prix.

The Mexican was more than a tenth clear of Charles Leclerc, while championship leader Max Verstappen was third best in the opening 60-minute session.

Valtteri Bottas was among those to head out of the lane early, flo-vis paint on his airbox.

Alfa Romeo Sauber was one of the seven teams to have development parts for this weekend, with a new circuit-specific front and rear wing on the C42.

The Finn was out on a set of the medium compound tyres, though a mixture was in use throughout the field as, inside of the opening five minutes, all 20 drivers had been on track.

Aston Martin had sent Sebastian Vettel and Lance Stroll out on the soft compound tyres, while Ferrari had its pairing out on the hard compound rubber with the balance were on the yellow-walled mediums.

A water leak for Mick Schumacher saw the German stop out on track, triggering a Virtual Safety Car as the Haas was pushed clear.

Porpoising was again a noticeable phenomenon for both Mercedes and Ferrari.

However, it was different for the former, with the frequency having seeming increased though less severe than seen during the earlier part of the season.

Meaningful times began to be set some 10 minutes into the session, Verstappen going quickest with a 1:46.932s.

The Virtual Safety Car was called again when Nicholas Latifi stopped in the middle of the lap, reporting the car had “suddenly died” with 44 minutes remaining.

Soon after the track went green once more, Verstappen improved on his previous effort to bank a 1:46.477s.

His pace was supported by team-mate Perez, who went second best with a 1:46.545s.

Halfway through the session, Hamilton had climbed from his car as Mercedes mechanics worked on the front suspension of his W13.

It was a similar case across the garage with attentions focused on the front of George Russell’s car too.

Verstappen continued to improve, setting a 1:45.810s despite the top plane of his rear wing flapping wildly when the DRS was open.

Attentions with 20 minutes remaining turned to soft tyre running, Perez replacing his team-mate at the top of the timesheets with a 1:45.476s.

The Monaco GP winner again looked in strong form, confident on the brakes to seemingly hold the early pace advantage over Verstappen on their first soft tyre runs.

The leading two teams were well clear of the rest of the field, Hamilton more than a second off the outright pace in fifth place.

All but matching that speed were the Scuderia AlphaTauri pairing, with Yuki Tsunoda just 0.009s slower than Hamilton, and Russell 0.029s slower again.

Late in the session, Pierre Gasly snatched a brake at Turn 15, running into the run-off area.

He ended the session ninth fastest, part of a tight group that ran from Hamilton in fifth to Esteban Ocon in 10th.

Perez however was left to top the session from Leclerc, with Verstappen third ahead of Sainz in the second Ferrari fourth.

Alonso banked a lap as the chequered flag few to improve to fifth, shuffling the midfield runners down a spot.

There was something of a gap to Lando Norris in 11th, the McLaren driver nearly 0.8s away from the pace of Ocon ahead.

Daniel Ricciardo was the slowest of the drivers who managed a meaningful time, 18th on a 1:48.810s.