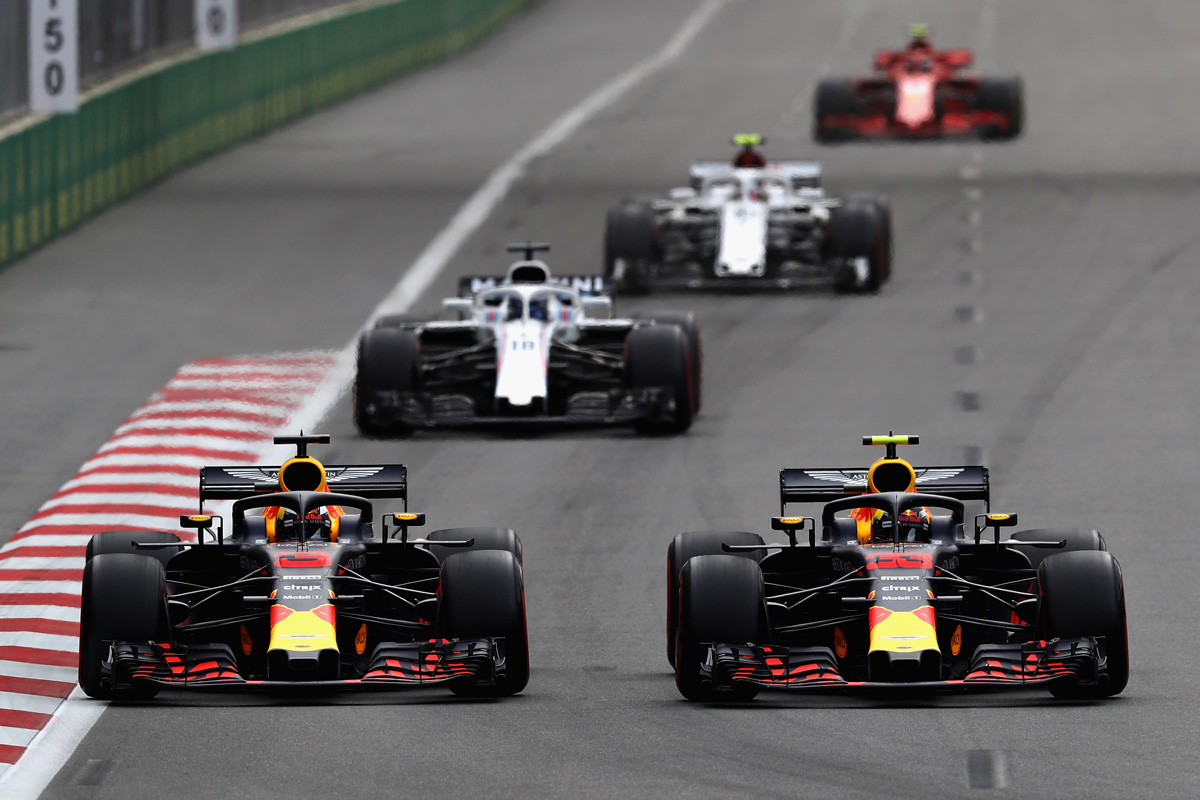 In its second event in Formula 1 history, the 2018 Azerbaijan Grand Prix was one to remember for its craziness, headlined by an infamous crash between Red Bull team-mates Daniel Ricciardo and Max Verstappen.

Ferrari had appeared to be the team to beat as Kimi Raikkonen led the way in the first two segments of qualifying, although it was Sebastian Vettel who started on pole beside rival Lewis Hamilton.

The field ran cleanly through Turn 1, with Vettel leading the pack, but at Turn 2 the mayhem started, with Sergio Perez attaining damage, as well as a three-wide collision between Fernando Alonso, Sergey Sirotkin and Nico Hulkenberg on the run to Turn 3.

Sirotkin’s #35 Williams car would take the worst hit, and retire from the race.

Going into Turn 3, Raikkonen tried a move on Esteban Ocon’s Force India machine, but the move sent Ocon into the wall heavily, and forced him to retire from the race as well.

Under the Safety Car, a number of drivers went into the pits due to damage and punctures, including Perez, who would also serve a five-second penalty due to contact with Raikkonen in the opening stanza.

Alonso was lucky to make it back into the pits, as he had two punctures on the right hand size of his car, and a broken front wing, but the Spaniard was able to continue.

The restart sparked the first battle between the two Red Bull drivers, their squabbling allowing Carlos Sainz to sneak between them when Ricciardo was carted wide.

On Lap 10, and after a lightning start, Hulkenberg lost the rear of his Renault heading into Turn 4 and slapped the wall, ending his race.

On Lap 12, the Red Bulls made light contact on the exit of Turn 1, with Verstappen making a brave move on his team-mate that he then completed at Turn 2.

The battle continued onto Lap 27, where Ricciardo and Verstappen were blocking each other as they jostled for position, but Ricciardo finally finished the move on Lap 35.

Five laps later, the Red Bulls had both pitted, but it was Ricciardo who ended up back behind Verstappen, so the Australian would need to catch and pass his team-mate all over again.

Team orders were still yet to be deployed, despite a number of near misses.

With just 11 laps remaining, Ricciardo had a huge run on Verstappen going 340km/h down the main straight before his late braking and Verstappen’s blocking resulted in nose-to-tail contact.

The duo would slide into the run-off area of Turn 1 and bring out the second Safety Car of the day.

Both drivers were okay and exited their vehicles in disbelief.

“I think it shouldn’t have happened, of course but it doesn’t matter who to blame, it’s just bad for the team,” Verstappen said at the time.

“It’s a pretty crappy situation so I guess myself and Max need to apologise for how it ended,” Ricciardo said.

“We were battling, I mean we want to race and we are thankful that the team let us race, but this is the worst scenario and that’s the crappy part of it, that it’s come to that.

“We obviously battled all race and we touched maybe once or twice already but it’s just not nice from a team’s point of view and we obviously don’t feel too great.”

Helmut Marko later said it’s against the team’s philosophy to give team orders, as they didn’t have a number one or number two driver.

Back on track, under the Safety Car, Romain Grosjean found the wall towards the back end of the circuit whilst trying to keep his tyres warm, initially blaming Marcus Ericsson for the incident.

On the restart with four laps remaining, pole-sitter Vettel tried to charge down the inside of race leader Valtteri Bottas, but Vettel locked up and dropped to fourth in the process.

One lap later, Bottas ran over a piece of debris and would suffer a puncture, gifting his Mercedes team-mate Hamilton the lead, and ultimately the race win.

Raikkonen would finish in second, with Perez making an epic recovery to finish third, as only 13 drivers finished the race.

F1 returns to Azerbaijan this weekend, for the eighth round of the 2022 season.