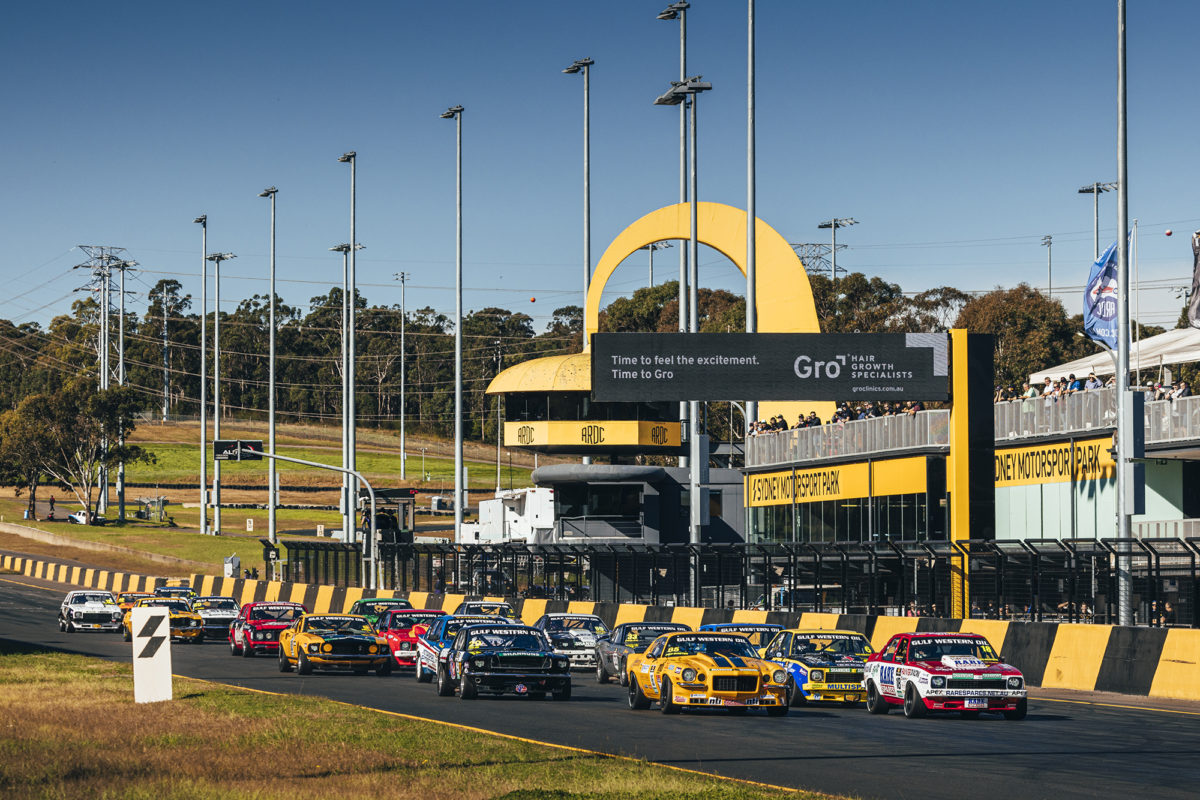 The start of the Touring Car Masters race in which the breach occurred. Picture: Australian Racing Group

Gulf Western Oils Touring Car Masters competitors are still seething over what they perceive to be a lenient penalty handed out to round winner John Bowe at Sydney Motorsport Park.

Bowe moved into the series lead after taking out Races 1 and 2 of the weekend, then finishing second in Race 3, from 11th position on the grid.

He had been sent back there as punishment for running an incorrectly marked set of tyres in Race 2, but his win, and hence series points and lap record, earned late last month in that encounter stand.

The vast majority of the Touring Car Masters paddock has been riled, Speedcafe.com understands, by what is in their opinion a very light penalty given the nature of the breach.

The popularly, albeit not unanimously, held view is that stewards should have disqualified Car #18 from the race in question.

“The fact that someone can be in breach of the rules, win the race, keep the lap record, championship points and then go onto win the round leaves a lot of questions on the table,” said TCM driver Gerard McLeod when queried by Speedcafe.com about the matter.

“Rules are rules and they are very clear. It’s up to the competitor to follow them and it’s up to the officials and stewards to enforce them correctly and consistently.

“The category is in a rebuilding stage and needs consistency both technically and judiciary.

“I hope this kind of thing doesn’t affect who wins a championship come the final round.”

Motorsport Australia officials police the category and Speedcafe.com has obtained the Summary of Judicial Outcomes – Technical which was distributed to competitors in the days after the event, where an explanation of how the penalty was arrived at is given.

“Post-Race 2 during Parc Ferme, an investigation was progressed, by the TD [Technical Delegate Peter Kemp] and TA [Technical Advisor Scott McGrath], regarding the tyre markings present on Car 18,” it reads.

“The investigation concluded that 2 of the tyres fitted to Car 18, whilst marked as being tyres previously marked at Round 1, were not marked for use in Round 2 as required by the 2022 Gulf Western Oil Touring Car Masters Series Sporting and Technical Regulations V2; Article S13.2 (b).

“Summary: The investigation determined that this was as a result of an error on behalf of the team members responsible for the assignment of the tyres to be marked, and their error in understanding the regulations and/or seeking clarification of the regulations at the time the tyres were marked for Round 2.

“The penalty applied reflected this error on the behalf of the team members responsible.”

Each entry is allowed six dry weather tyres for use across Qualifying and the three ‘Series Races’ (ie not Trophy Race) at a TCM round, of which a maximum of four may be new and the balance used (technically, “previously marked”, per Article S13.2 (b) of the category’s Sporting and Technical Regulations).

Furthermore, those six dry tyres must be marked before Qualifying (presented for marking in front of garage/paddock bay within an hour of completion of final practice).

That much, however, is a slight change in procedure relative to 2021, when just the first four needed to be marked before Qualifying, and the rest could be marked during the event.

The 2021 Sporting Regulations stated (Article S13 (f)), “Within 1 hour from the completion of the final practice session at each round of the Series, each Competitor must present a minimum of 4 tyres for marking at the front of their respective garage/paddock bay.

“The balance of tyres may be marked during the Event. Tyre marking will cease from the commencement of the final race at each round.”

The 2022 Sporting Regulations state (Article S13.2 (c)), “Within 1 hour from the completion of the final practice session at each Round, each Competitor must present their dry tyres for marking at the front of their respective garage/paddock bay.”

The revised marking procedure was in place for Round 1 of the season, of course, but Round 1 is an exception in so much all six tyres in a car’s allocation may be new.

What benefit a competitor would gain by not presenting used tyres until after Qualifying is not obvious, considering they would be unlikely to run said tyres in Qualifying or even Race 1.

It should be made clear that there was no finding that Car #18 exceeded its tyre allocation, which would certainly confer a sporting advantage.

Furthermore, it should be noted that the ‘used’ dry tyres from Round 1 may have been hardly used at all, while meeting the “previously marked” stipulation, considering the frequency and intensity of rain during that earlier Sydney event, and that would explain the pace which Bowe displayed while racing on the ‘old’ tyres which had not been marked in time. 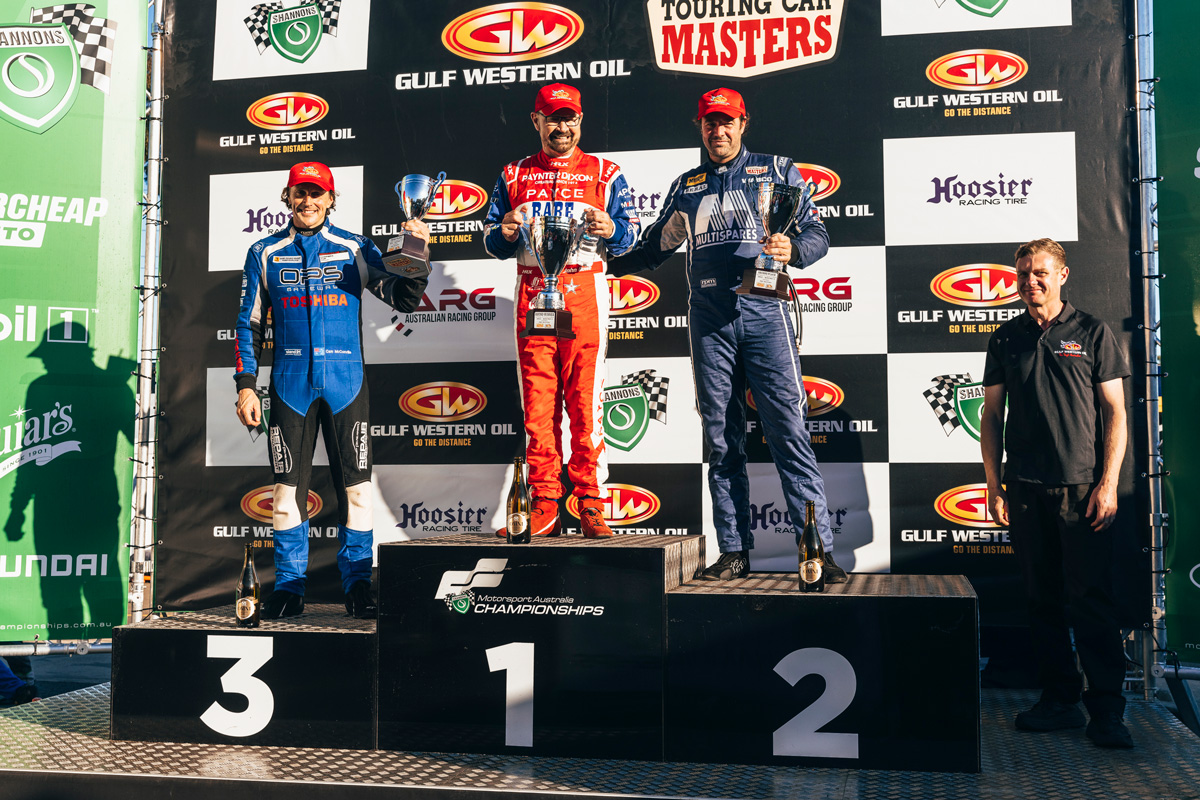 In fairness to category management and Motorsport Australia officials, it is also worth considering that the breach may not have been detected at all if not for a more rigorous marking procedure which was introduced this year, replacing the ‘tradesman’s pen’ technique which could easily be cheated.

In fact, Speedcafe.com is aware of rumours that another driver (to be clear, not Bowe) used extra tyres at a TCM event in the not too distant past, when the old process was in place.

The point of policing tyre usage is to ensure sporting fairness, and tyre management is a critical element of performance, particularly at a high-degradation track such as Sydney Motorsport Park.

While the competitors to whom Speedcafe.com has spoken commended TCM management on how much more thorough scrutineering has been this year than last, there is significant anger about how a driver could keep a race result while in breach of a regulation with potentially significant sporting ramifications.

Category manager Liam Curkpatrick declined to comment on the matter when approached by Speedcafe.com, on the basis that the breach was detected and penalty issued by Motorsport Australia officials.

It is understood, consistent with the above quoted judicial summary, that the rationale for the magnitude of the penalty was that no performance advantage had been gained, but rather that the breach was considered more administrative in nature.

Bowe himself said as much as well.

He stated that he had only used six tyres across Qualifying and the three Series Races, notwithstanding what he said was an innocent mistake in not presenting all of those six tyres for marking when required.

“It was an honest mistake,” the six-time series winner told Speedcafe.com.

“We weren’t cheating; we weren’t using tyres that were ineligible.

“Basically, none of us in my little team read the new wording of the rules, so we thought we were quite within our rights to use previously marked tyres, which is what they were.

“The category technical people gave us the choice of defending ourselves at the stewards, or taking a penalty. They offered the penalty and we accepted the penalty.”

Bowe also had some stern advice for his rivals who had sought to make an issue of the matter.

“It does not surprise me one little bit that other competitors are whingeing, because most of them whinge all the time, but I try not to hold it against them,” he added.

“The technical guys are doing a very good job; not just about this, they are looking and checking on things that have never been checked before.

“So, I hope these people that are whingeing have got their own backyard in order.”

Round 3 of the season supports Supercars’ NTI Townsville 500 on July 8-10.