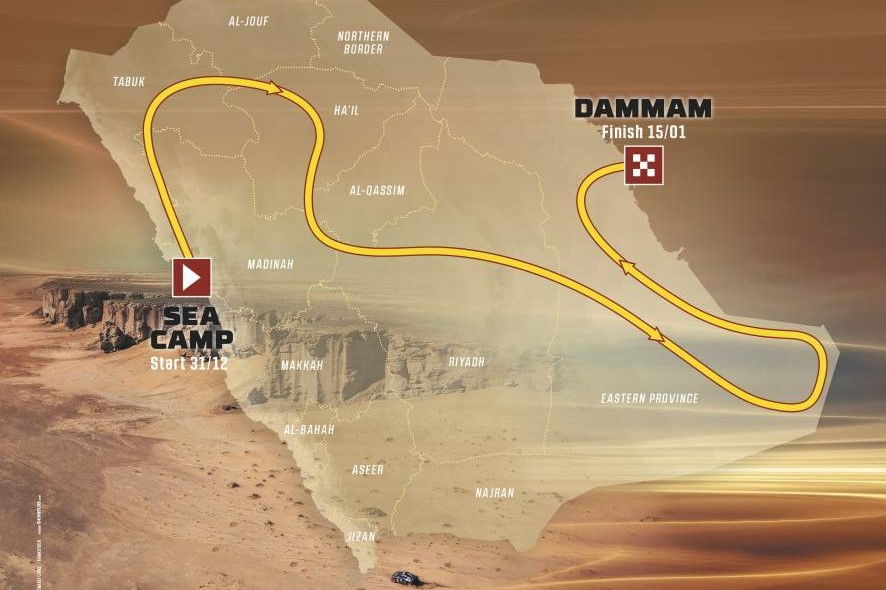 Dakar Rally organisers have revealed that next year’s event will be longer by both distance and number of stages.

The 2023 Dakar will be comprised of 14 stages plus a prologue, with reduced liaison time and more competitive running.

Most special stages will be close to 450km long, making for a total of almost 5000km, significantly up on this year’s 4258km figure (prologue included).

Furthermore, with the route taking on a different shape compared to that of 2022, 70 percent of the special stages are new.

Instead of a loop back to Jeddah, the journey will start on the ‘Sea Camp’ on Saudi Arabia’s west coast on New Year’s Eve, heading north initially before turning southeast.

The field will spend three days in the ‘Empty Quarter’, located in the nation’s deep southeast, during which time they will have to marathon stage which allows them only limited assistance.

From there, competitors will turn around and proceed northwest to Dammam for the finish on January 15.

Finer details of the route, namely the discrete start and finish locations, and hence distances, are typically announced closer to the event.

What has been confirmed so far are also a number of notable sporting and technical changes.

Not only will all competitors now have a digital roadbook, rather than paper, some special stages will feature multiple routes and a ‘random roadbook’ system.

“The routes of most of the special stages will be split into two over a more or less long section, with the roadbooks of A and B routes assigned randomly,” announced Dakar organisers.

“Competitors tempted to follow their predecessors without thinking run the risk of missing their waypoints and thus incur severe penalties.”

There will also be time compensation for riders who have to open a stage, given the significant burden which that represents.

Bikes competitors have often acted strategically in a bid to avoid opening the road, with Australian GasGas rider Daniel Sanders claiming he stopped for a picnic for that reason during this year’s event.

Sanders would later crash out of Dakar 2022 in a traffic accident on the way to a stage start, before team-mate Sam Sunderland took the event victory.