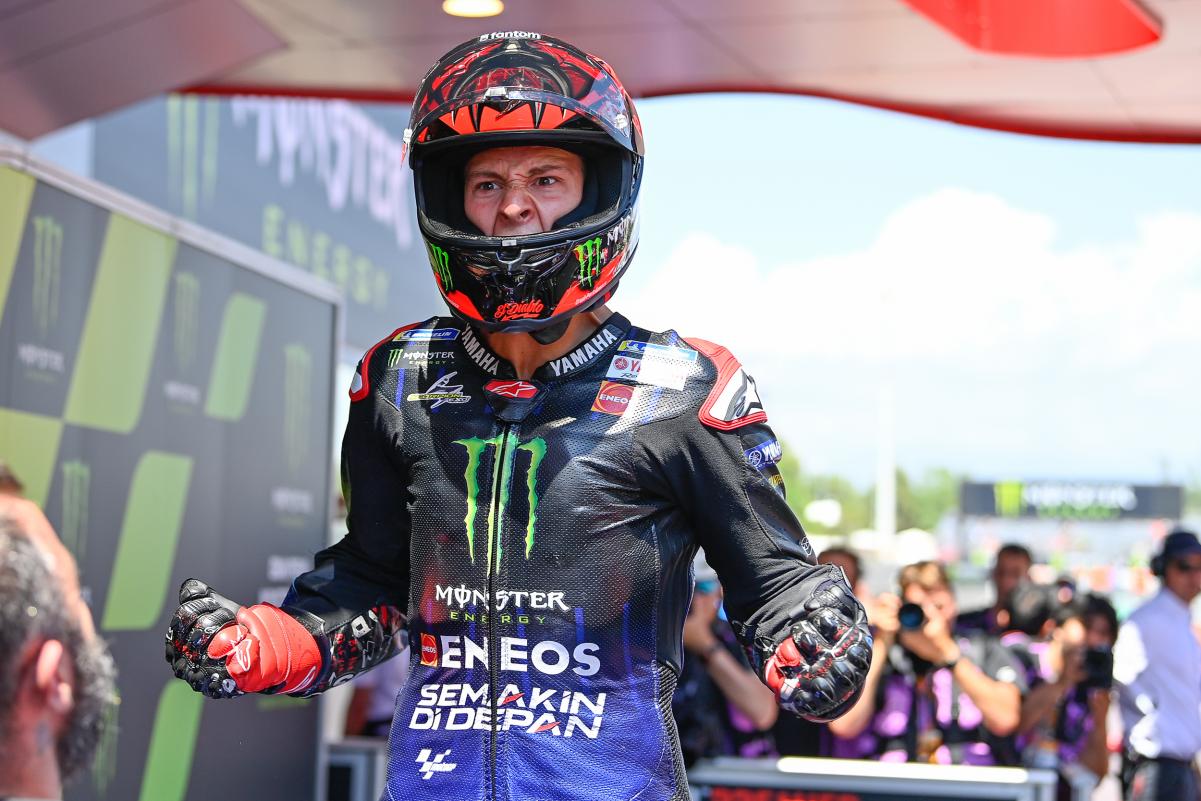 Championship leader Fabio Quartararo has won the Catalan MotoGP while Aleix Espargaro lost second place when he began celebrating a lap too early.

Tech3 KTM’s Remy Gardner finished a career-best 11th, from 20th on the grid at the Circuit de Barcelona-Catalunya, while fellow Australian Jack Miller went from 11th to 14th on his Ducati Lenovo Team entry.

Both of the Prima Pramac Ducatis made the podium, Jorge Martin second and Johann Zarco third, but it was a disaster for the Bologna manufacturer’s two title contenders given both Enea Bastianini and Francesco Bagnaia failed to finish.

Bagnaia (Ducati Lenovo Team) was an innocent victim when he was taken out in the first championship-changing moment of the race, as the field braked at Turn 1 just after the start.

Takaaki Nakagami lost the front of his Idemitsu LCR Honda and went down near the front of the pack, his own head striking the rear wheel of Bagnaia’s Ducati and his bike collecting Alex Rins’ Suzuki Ecstar entry.

Stewards determined no further action would be taken, with both the Japanese rider who kicked off the incident and Rins were later taken to hospital for further checks.

Meanwhile, despite Aleix Espargaro making a very good start from pole position on his Aprilia, Quartararo outbraked him at the first corner and grabbed the lead on his Monster Energy Yamaha.

That move ticked off one crucial objective for ‘El Diablo’, whose YZR-M1 is sorely lacking in straight line speed and hence he could ill afford to let Aleix Espargaro get a break given Catalunya’s long main straight.

However, it got even better for him when Martin overtook #41 for second spot on Lap 3, while Zarco was lurking just over a second further back in fourth position.

By the time Aleix Espargaro re-passed the #89 Ducati on Lap 10, the #20 Yamaha was more than three seconds up the road.

Furthermore, Quartararo’s lead continued to grow, to five seconds when Martin got back into second position on Lap 16, and almost six once Aleix Espargaro had wrested the place back yet again on Lap 21.

Even so, the man who was born in nearby Granollers looked like limiting the damage to his title aspirations, and achieving a childhood dream, when he crossed the start/finish line half a second up on Martin at the end of Lap 23.

It was then that Aleix Espargaro began to slow with an apparent mechanical issue, which would have seemed the cruellest of blows until the real drama became clear.

He had in fact mistakenly thought that the race was over, and began waving to the crowd before realising that there was a lap still to go.

By then, #41 had dropped to sixth, and he managed only to re-pass Luca Marini (Mooney VR46 Ducati) before actually taking the chequered flag.

With Quartararo romping to a 6.473s win, Aleix Espargaro’s howler meant the gap between them at the top of the championship has grown to 22 points instead of 13.

Martin made a welcome return to the podium prior to surgery on his right hand, and Pramac team-mate Zarco inherited third spot.

Joan Mir (Suzuki Ecstar) finished fourth, largely by virtue of the 12 positions he gained from lights out to the exit of the opening corners, after qualifying 17th.

Behind Aleix Espargaro and Marini at the end were Aprilia’s Maverick Viñales and Red Bull KTM team-mates Brad Binder and Miguel Oliveira.

Alex Marquez came from dead last, after a practice crash kept him out of qualifying, to round out the top 10 in the race itself on his Castrol LCR Honda.

Gardner gained five positions from the end of the standing lap to the chequered flag, with fellow rookie Darryn Binder (WithU RNF Yamaha) finishing just behind in 12th, ahead of Franco Morbidelli (Monster Energy Yamaha).

Miller had qualified a lowly 11th anyway but he slipped as far back as 17th on Lap 4, got up to 11th again, then ceded three spots on Lap 22 and remained 14th thereafter.

On the second Tech3 KTM, Raul Fernandez got his first MotoGP championship point by getting home in 15th, with Ducati test rider Michele Pirro (Aruba.it Racing) and Repsol Honda’s Pol Espargaro the other finishers.

Bastianini was seventh when he crashed on Lap 8 and, while he retains third in the standings, is now 53 points away from the championship lead despite his three grand prix wins still being the greatest haul of anyone so far this season.

His Gresini Ducati team-mate Fabio Di Giannantonio lasted one lap longer before he too had a spill, with Marco Bezzecchi (Mooney VR46 Ducati) and Stefan Bradl (Repsol Honda) the other crashers.

Andrea Dovizioso (WithU RNF Yamaha) made for eight DNFs, although he simply pulled into the pits with seven laps to go.

The field stays at Catalunya for a post-race test, albeit one which Martin will skip due to his operation, before Round 10 at Germany’s Sachsenring in a fortnight from now.