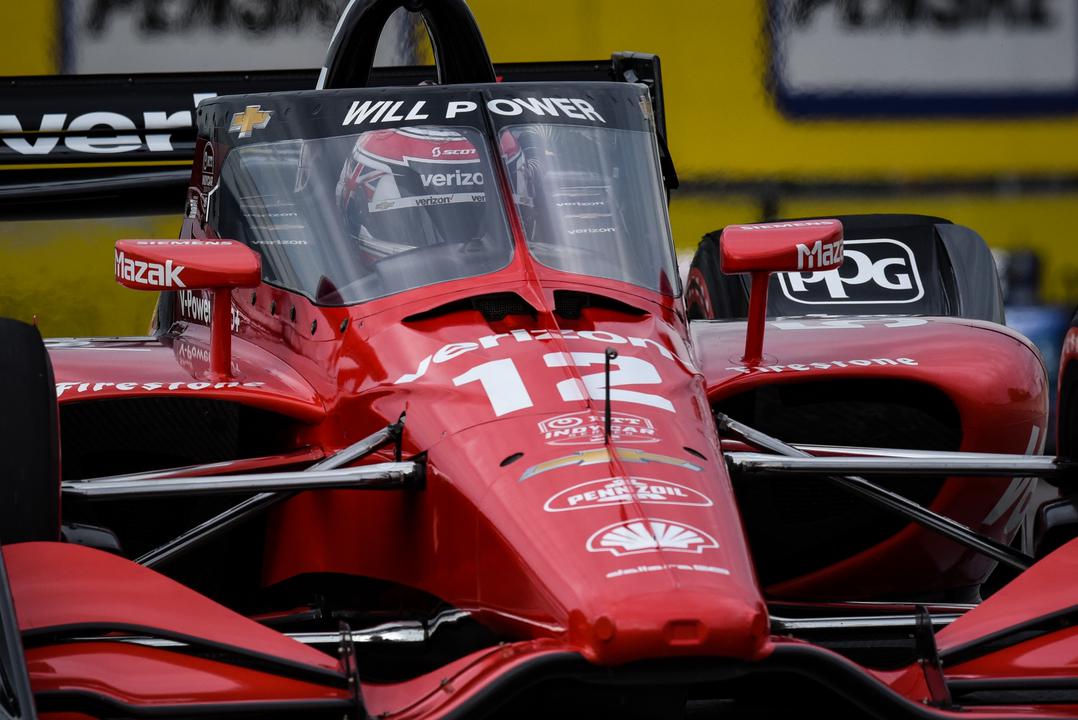 Will Power has come from 16th on the starting grid to beat Alexander Rossi to victory by a single second in an enthralling strategy battle at IndyCar’s Detroit Grand Prix.

The Team Penske driver prevailed by precisely 1.0027s after the last 70 laps of racing around the Belle Isle street circuit, having been a real outlier in the field by opting for a black-black-red tyre strategy.

Rossi, on the other hand, was put onto a three-stopper by Andretti Autosport which saw him get rid of his only set of red tyres after just the first four laps of the contest.

Power was 16 seconds to the good when he came up to speed for the start of his final stint, which would be a very long 20 laps on the alternate compound, but made the softer rubber last as well as he needed to.

The result means that the Queenslander is now back into the series lead, with a three-point margin over Indianapolis 500 winner Marcus Ericsson.

Chip Ganassi Racing’s Scott Dixon took third on a black-red-black strategy at 7.1239s away from victory, with Josef Newgarden fourth after going red-black-black from pole position in the #2 Penske Chevrolet.

Pato O’Ward (McLaren SP) rounded out the top five on the same strategy as Newgarden, while Scott McLaughlin finished a lap down in 19th position after an off during his first stint in the #3 Penske entry.

Back at the start, Newgarden had led the field away from pole position, while Meyer Shank Racing duo Simon Pagenaud and Helio Castroneves cleared the other front row starter, Takuma Sato (Dale Coyne Racing w/ RWR), in the opening corners.

Rossi was aggressive early on, rising from 11th on the grid to sixth, one position behind O’Ward, before pitting to discard his red tyres for a set of new blacks after just four laps.

Dixon had been the only driver among the top 14 starters to do so on primary tyres and while that cost him initially, the alternate tyres were falling away quickly.

However, Power, despite qualifying 16th, was soon the one who was leading the charge of those who began the race on primaries.

He was in second place at a five-second deficit to leader Newgarden by the time he passed both of the MSR cars, on Laps 11 and 12, but quickly caught his team-mate too.

Power made the move on Lap 14 at Turn 3, with Newgarden overtaken later that lap also by both Dixon and Alex Palou, the latter of whom was pursuing the same strategy as his Ganassi team-mate from 18th on the grid.

Newgarden had to persevere on his worn reds as Penske pursued a two-stop strategy for Car #2, but that was looking a suboptimal decision when Rossi passed him on Lap 16, for fifth spot, despite having already pitted once.

McLaughlin was effectively running around the back of the top 10 when he had a big lock-up and strayed up the run-off area at Turn 3 on Lap 18.

That may have been the trigger for Newgarden and O’Ward to finally pit and get rid of their red tyres, which they did at the end of that lap, before Rossi came in for another set of black tyres at the end of Lap 24.

Power had gapped Dixon to the tune of six seconds when he finally made his first stop at the end of Lap 25, for another set of blacks, while Dixon and Palou changed to reds when they were into the lane a lap later.

At that point, Power was the leader again, from Dixon, Palou, Rossi, Kyle Kirkwood (AJ Foyt Racing, second black tyre stint), Newgarden, Sato, O’Ward, Pagenaud, and Ericsson (CGR), while Castroneves had not long dropped out of the contest due to an electrical problem.

Rossi passed Palou on Lap 39 at Turn 3, at which time he was more than 14 seconds away from the lead after initially making inroads on Power during the stint.

Four laps later, the outgoing Andretti driver was also past the #9 CGR Honda of Dixon at the same corner, by which time Power was 18 seconds up the road.

Palou pitted at the end of that same lap, the 43rd of the race, while Dixon, Newgarden, and O’Ward were into the lane together on Lap 44, with all of those four drivers taking another set of blacks for their final stint.

Rossi was 21 seconds in arrears of the race-leading #12 Penske Chevrolet when he made his third and final stop at the end of Lap 46, for another set of blacks, resuming ahead of Dixon.

Kirkwood thus inherited second position and looked to have played himself into a solid result, albeit with a tricky final stint ahead of him, when he pitted for his obligatory red tyre set on Lap 48, but his afternoon was soon over once he got loose and glanced the wall on his out lap.

All eyes were on Power when he made his second pit stop with 20 laps to go, setting up the longest red tyre stint of anyone, considering Kirkwood was not going to complete his.

The Queenslander emerged with a 16-second lead, from Rossi, Dixon, Newgarden, O’Ward, Palou, Pagenaud, Ericsson, Colton Herta (Andretti w/ Curb-Agajanian), and Rinus VeeKay (Ed Carpenter Racing), with the leader being the only driver in that top 10 on reds.

The race then settled into a tense period, the key question being whether Power could make his tyres last well enough, or whether Rossi would run him down by the chequered flag.

Power still led by 12 seconds with 10 laps to go, but by the time the gap dropped below 10 seconds, with six laps remaining, Rossi was gaining a second per lap or so on Car #12.

It was then that traffic started to play its part, with the race leader catching the dirty air of Jack Harvey (Rahal Letterman Lanigan Racing), who was last of those on the lead lap in 17th, but Rossi having to thread his way through lapped cars.

The gap continued to close, but Power had 2.5s in hand as they started the final lap of IndyCar racing around the Belle Isle street circuit, and he would convert that into a one-second victory.

Behind Power, Rossi, Dixon, Newgarden, and O’Ward, was Palou in sixth, then Ericsson, Herta, Pagenaud, and Felix Rosenqvist (McLaren SP).

VeeKay was not running at the finish after crashing into the tyre barrier at Turn 6 on the final lap.

The season continues next weekend at Road America, with that race live and ad-free on Stan Sport.