Miller: ‘A pretty shithouse day to finish off a shithouse weekend’

Miller: ‘A pretty shithouse day to finish off a shithouse weekend’ 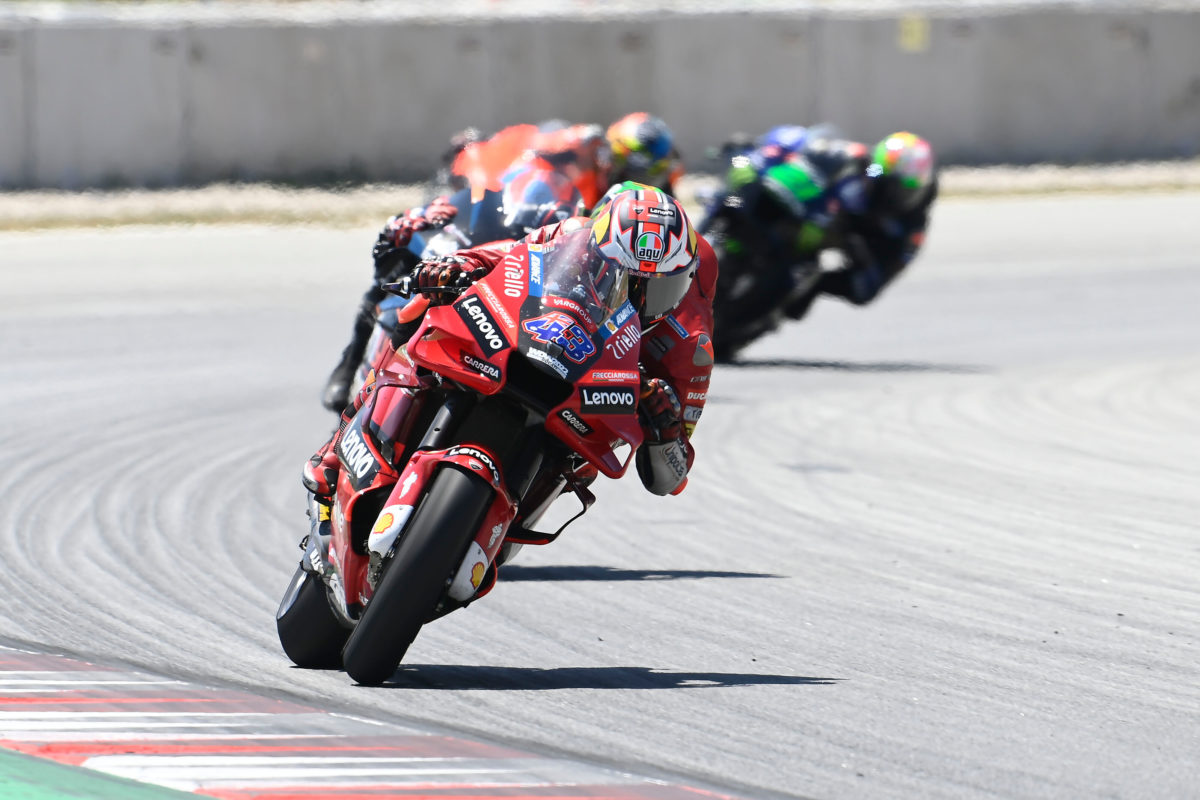 The factory Ducati rider finished 14th from an already lowly 11th on the grid at the Circuit de Barcelona-Catalunya, but dropped as far back as 17th in the 24-lapper.

Both of the Pramac Ducatis, on the other hand, got onto the podium, although Johann Zarco would have finished fourth if not for Aleix Espargaro’s disastrous premature celebration.

However, Miller admitted in his regular post-round column that his own performance was a “head-scratcher”.

“There’s no point sugar-coating it – that was a pretty shithouse day to finish off a shithouse weekend,” he wrote on his official website.

“Finishing 14th… last year I was on the podium here, and this year I was 30 seconds away and looking for answers.

“We know the bike, and I didn’t forget how to ride… we definitely need to go away, analyse it and work out what happened because this one was a head-scratcher.”

The Queenslander did suggest, however, that his tyre choice was suboptimal.

With Catalunya being a relatively low-grip surface, and temperatures relatively high, he chose the hard compound on the rear of his Desmosedici in the hope that the race would come to him.

While Zarco also opted for a medium-compound Michelin hoop on the front and a hard on the rear, Miller said he could not make his tyres work at all.

“The track was 55 degrees or more for qualifying and the race, so we took a gamble in the race with the hard tyre hoping it would last even if it made the start of the race hard,” explained #43.

“But it just never came to me, I tried my maximum from the beginning of the race until the end but I quickly had nothing on the right-hand side of the tyre.

“By the end, I was spinning in a straight line! The hard tyre just didn’t function, basically. Felt like I had two decent tyres all weekend.”

Notwithstanding the double podium for Prima Pramac Racing, the Bologna factory arguably had a shocking race considering both of its championship contenders failed to finish.

Miller’s Ducati Lenovo team-mate Francesco Bagnaia was taken out by Takaaki Nakagami at the first corner, while Gresini Racing’s Enea Bastianini lost the front on his own on Lap 8.

Bastianini is in line for some form of promotion in 2023, with Miller expected to land at KTM.

‘Jackass’ himself hinted at that as he summed up his situation and cast an eye to the Catalunya post-race test and German Grand Prix later in the month.

“There’s no official announcements at the moment, but we’re just waiting when one of them comes out.

Miller has now scored just three points in his last two races, having finished 15th at Mugello, and will leave Catalunya ninth in the riders’ championship.