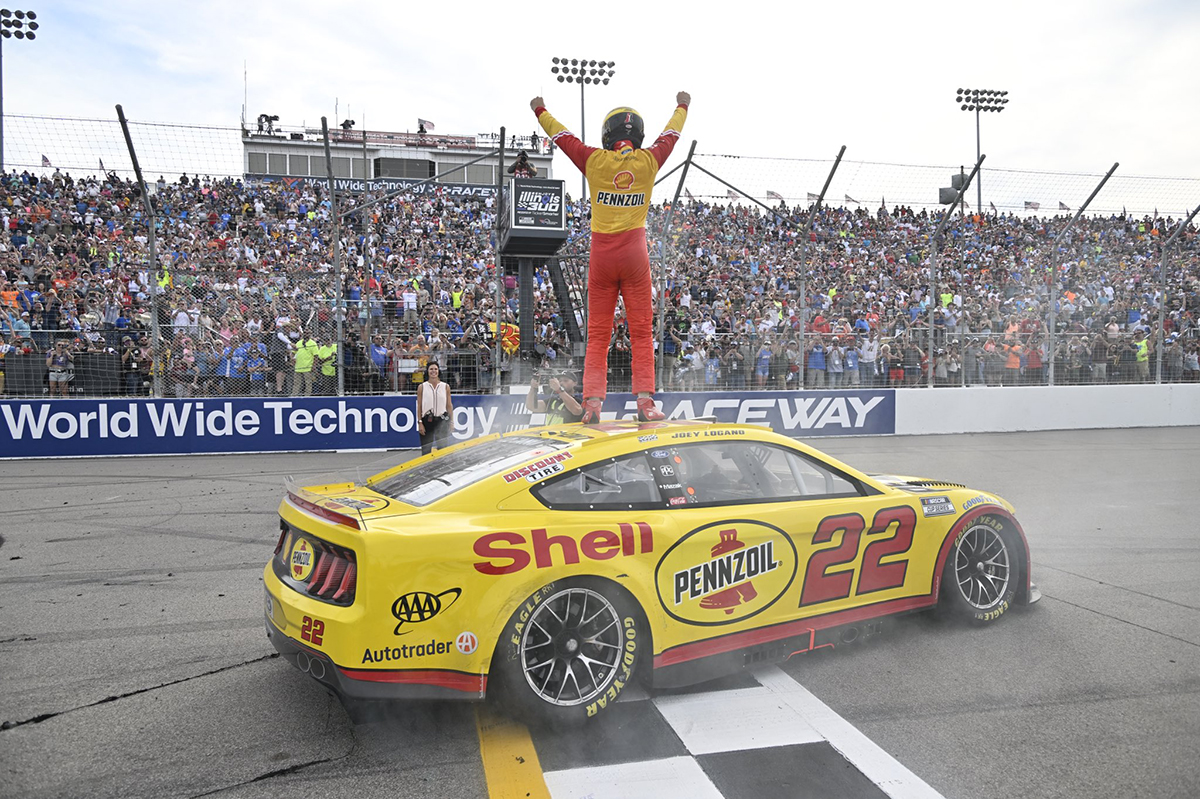 Joey Logano has stolen victory from Kyle Busch in an epic final restart battle between the two veterans in the NASCAR Cup Series’ inaugural visit to the Gateway track.

The NASCAR Trucks Series has visited the Gateway track for most years since 1998, but 2022 marked the first time that the Cup Series would race on the 1.25-mile track.

Young guns Chase Briscoe and Austin Cindric qualified on the front row, and it was Briscoe who led the early laps, but Cindric was able to take the Stage 1 victory in his Penske Ford Mustang when Briscoe blew a tyre while in the lead.

Following that, third-place runner Ryan Blaney cut a tyre and went around, and on the restart Chase Elliott and Bubba Wallace spun on the front stretch, both with minimal damage.

Michael McDowell would lead much of Stage 2, but it was Kurt Busch who won the stage after a late restart due to contact between Ricky Stenhouse Jnr and Wallace.

Multiple drivers, including Tyler Reddick, Cole Custer and Stenhouse Jnr found trouble during the final stage, before Kevin Harvick took a hard hit, spinning all the way down from the apron and went into the outside wall heavily.

On the overtime restart, it was a battle between the Busch brothers, Kurt and Kyle and the Penske drivers, Logano and Blaney for the win.

Kyle Busch and Logano battled hard for the win with two laps remaining, jostling for the lead, making criss-cross and slide job moves on each other, but it was Logano who came out victorious in the end, winning by just over half a second.

Kyle Busch would end the race in second with his brother Kurt in third, Blaney finished in fourth and Aric Almirola rounded out the top five.

This win for Logano would be the 29th of his career, and move him up to 29th position on the all-time NASCAR winners list.

“It doesn’t get much better than that, racing for the lead with Kyle who’s one of the best was a lot of fun, crossing each other back and forth, I knew it was coming so I did it back to him,” Logano said.

“We had a good Shell-Pennzoil Mustang for sure, nice to get a few wins in the season here, start collecting those points.

“I’m really out of breath but what a great car though, I really messed up in qualifying and Paul [Wolfe, crew chief] made a great call putting two tyres on, and Blaney did a great job with the push going into [Turn] 1.”

The packed crowd got the grandstand finish they were looking for, as Kyle Busch explained post-race that he almost wrecked coming out of Turn 4, making the slide job move on Logano.

Truck Series regular Zane Smith, who replaced Chris Buescher this week due to COVID-19 protocols, was able to finish in 17th place, ahead of team-mate and team part-owner Brad Keselowski.