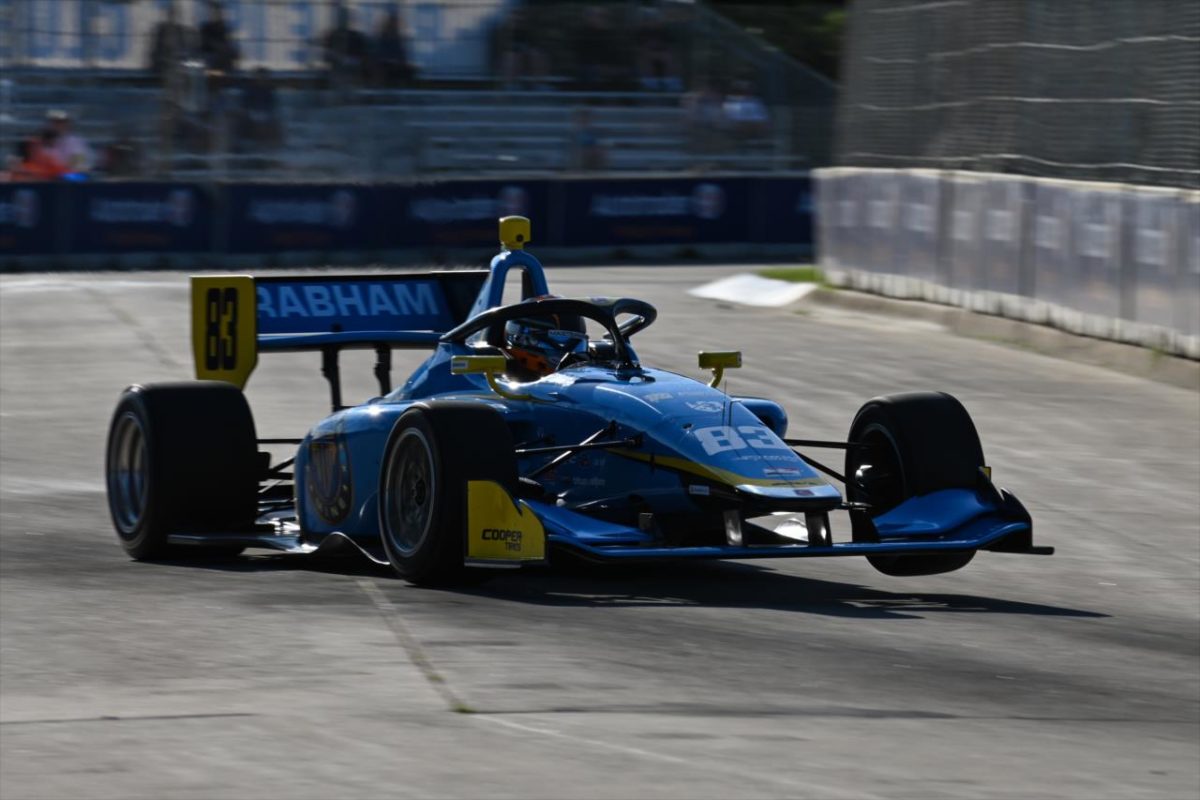 Matt Brabham and Hunter McElrea have each scored a podium in the Indy Lights double-header at Detroit.

Brabham qualified sixth for Race 1 and slipped to seventh on the opening lap, but had made up enough ground to set up a battle with Danial Frost over fourth position after the second and final restart.

Frost kept the Australian at bay until his HMD Motorsports w/ Dale Coyne Racing entry slowed with just two laps of 25 to go.

Up the road, Frost’s team-mate Linus Lundqvist won by 3.7s after 25 laps despite seeing his lead wiped out by Caution periods on two occasions, while Benjamin Pedersen (Global Racing Group w/ HMD) ran second all the way.

McElrea (Andretti Autosport) finished three laps down in 12th position, having locked up and slid into the Turn 7 tyre barrier while holding third position on Lap 17.

There was some redemption for the New Zealander when he finished second in Race 2, having occupied that spot all race.

Lundqvist again prevailed in lights-to-flag fashion in what was a 30-lap contest, while Brabham took fourth, one spot behind Andretti team-mate Sting Ray Robb.

“The highlights were finishing on the podium on Saturday and coming from sixth to third,” said Brabham.

“Obviously, a lot of people had issues again similar to St Pete[rsburg], so I was just able to salvage a bad qualifying.

“Finished just outside the podium in the second race in fourth, which is still a good result from fifth to move forward.

“Being on the podium in the first race and being able to dive in the fountain and experience the unique podium of Detroit for the last time was special.

“Both races went pretty smoothly and I was fast; I think I was tied for the fastest lap of the race on Sunday when we had some clean air.

“The race pace was good but as expected it was quite hard to pass.

“The lows were obviously qualifying; I’m just so disappointed in it.

“I felt like I had the same kind of speed as Linus and I proved that in the second race when I did the same lap time as him.

“Do I have enough to beat him? I don’t know. But I felt like I had enough speed to compete with him and maybe I would have finished second in both races.

“Just the qualifying killed me, I should have qualified second at least for Sunday’s race but we were caught out by a yellow flag in the session.

“It’s out of my control; we had pace but the qualifying hurt us.

“From sixth and fifth in qualifying to finish third and fourth in the races leaves me happy, but still some work to do.”

Lundqvist now has a commanding, 84-point lead over Pedersen in the title race, with Brabham fifth and McElrea sixth.

The season continued with Race 7 this coming weekend at Road America.