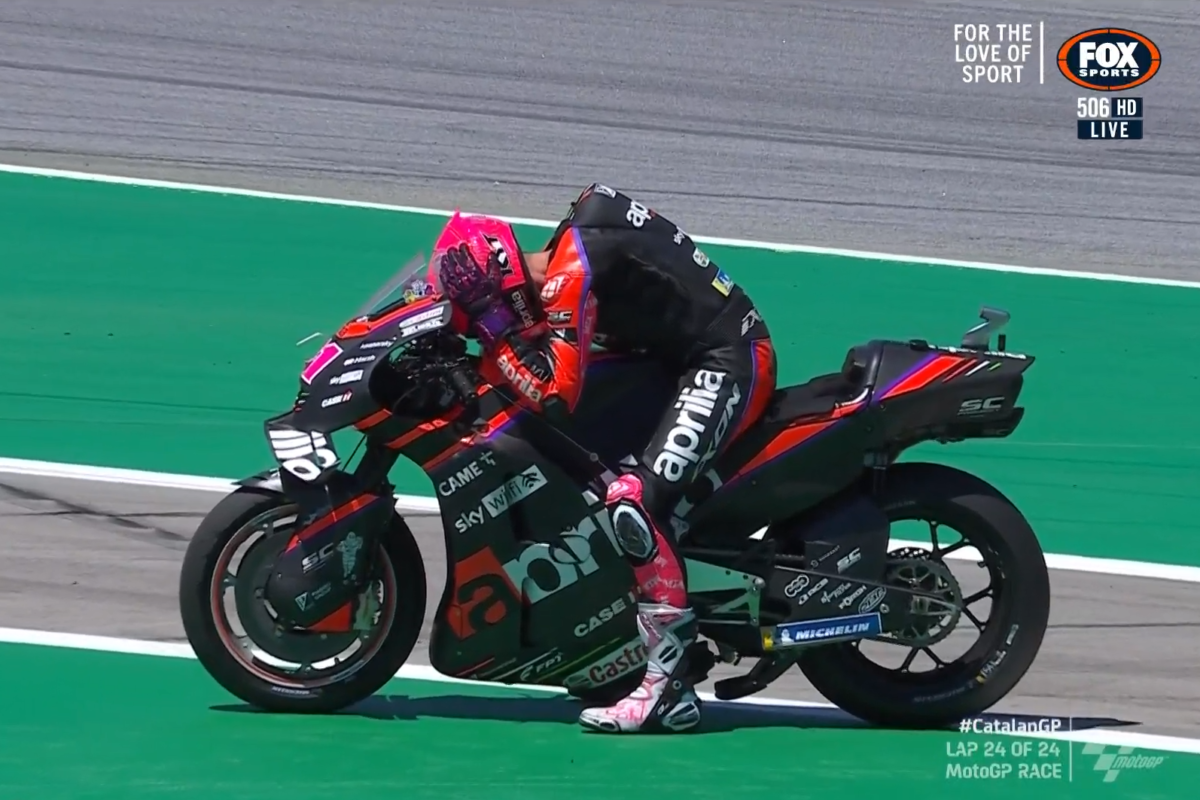 Aleix Espargaro says he was caught out by the Catalunya circuit’s unusual lap counter when he lost a MotoGP podium finish by celebrating a lap too early.

The Aprilia rider was second when he crossed the start/finish line at the end of Lap 23 of the Catalan Grand Prix, with he and third placed Jorge Martin having a comfortable margin over the latter’s Pramac Ducati team-mate, Johann Zarco.

It was then that Espargaro slowed and thumped his fuel tank as he eased into the Turn 1/Turn 2 run-off, suggesting a technical problem for his RS-GP.

He subsequently started waving to his home crowd, only to realise that there was still a lap to go as Luca Marini went past and relegated him to sixth position.

Espargaro at least got that spot back from Marini, but was obviously devastated after he actually took the chequered flag, having thrown away what would have been a first premier class podium at the track he grew up just kilometres from.

“That’s the only thing that I can say, sorry to my team. It’s completely my fault.”

The 32-year-old, however, is not the first rider to come unstuck in such fashion at the Circuit de Barcelona-Catalunya, but rather has now repeated howlers made by Kenny Roberts in 2006 and Julian Simon in 2009.

The track’s totem pole is unusual in so much that it displays ‘0’ once the leader starts the final lap, rather than a ‘1’ to denote how many laps remain.

In Espargaro’s case, the problem was exacerbated by the position of Aprilia Racing on pit lane, which meant his crew was in an awkward position with the pit board.

“My people were the first ones [out of the last corner],” he explained.

“So, some laps, I had no time to look at the laps [remaining on the pit board] as well as the gap with Martin.

“So, I did one more lap and I didn’t remember that here in Barcelona last lap is ‘0’ not ‘1’. And I closed the gas on the straight.

“So I’m very sorry for my team because, I didn’t have the speed of Fabio to win, but if I want to beat him in the championship I cannot do these mistakes.

Espargaro remains second in the championship but is now 22 points behind Monster Energy Yamaha’s Fabio Quartararo rather than the 13 which the figure would have been if not the for blunder, as he alluded to.

The Catalan had qualified on pole and got the jump when the lights went out, but was outbraked by Quartararo at the first corner and ended up trading second spot with Martin during the race.

Still, Espargaro says what was decisive in terms of the early battle with the #20 Yamaha pilot was being overly cautious with tyre wear.

“Yesterday [Saturday] between Michelin and my team, everybody put a lot of worry into my [mind] by saying that I use a lot of tyre, that I had to be gentle on the first laps and I was too gentle, sincerely,” he reasoned.

“Because at the end of the race, when I overtook Martin, I had enough tyre to put 41.5s and go away.

“I think Fabio was not faster than me, but he was smarter, was able to push at the beginning, and then it’s impossible to recover two, 2.5 seconds to Fabio.

“I think I could have gone with him at the beginning, but anyway, it’s too late.”