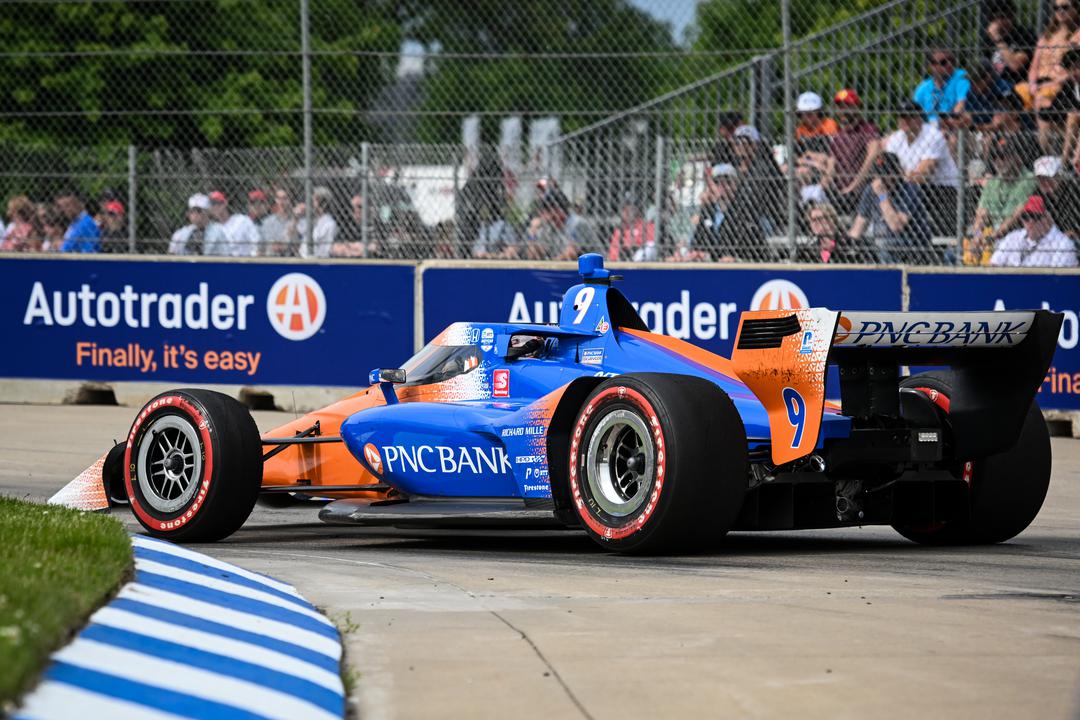 Scott Dixon thinks he might have left a better result in IndyCar’s Detroit Grand Prix on the table due to a lack of early aggression.

The Chip Ganassi Racing driver finished third, representing a net gain of six positions relative to where he started, but the man who stood on the top step of the podium made up even more ground than that.

Will Power came all the way from 16th on the starting grid to lead 55 of the last 57 laps, including the one which featured the chequered flag at the end, although it was a close-run thing as Alexander Rossi finished one second in arrears.

While Dixon and Power diverged on strategy in the middle stint, the former was the only driver among the top 14 qualifiers to start on the primary compound of tyre, and the latter was also part of that minority.

With the reds exhibiting little in the way of longevity, Dixon lost ground initially but he and Power were top two by the end of Lap 14, although in the opposite order to which they began the 70-lap affair.

One spot further back at that point was the six-time IndyCar champion’s team-mate Alex Palou, who likewise started on blacks, but from even further back, in 18th position.

Those two Ganassi drivers ran alternate tyres in their respective middle stints before getting back onto primaries, where as Power finished with a long, 20-lap stint on reds.

After a Caution-free race, Dixon finished seven seconds behind the winner, and Palou about that much further back again, in sixth position.

“Probably not aggressive enough on the start, I think,” admitted the third placed New Zealander.

“I think both Alex and Will did a tremendous job on the first few laps to get track position.

“I think if anything I would change in the race, it would be that; be a little more aggressive at the start.

“The red stint for us was actually pretty good. I know Will went black-black-red; I don’t know how many laps he had at the end to get on the reds…

“It was good for the 9 car, good for PNC Bank. Obviously, Honda have done a great job.

“Yeah, it’s great to be back on the podium for a change,” he added, having let a tantalising shot at victory in the Indianapolis 500 slip through his fingers, seven days earlier.

Also aggressive, arguably, was the Power strategy of running reds for so long, especially given the value at risk in the event of a late Caution.

Before he had stretched the softer compound so far, the longest anyone had gone on such tyres was 18 laps, including pole-sitter Josef Newgarden at the start of the race and then Dixon in his middle stint.

‘The Iceman’ is now sixth in the series standings, 53 points behind new leader Power, ahead of the Grand Prix at Road America this coming weekend.

Every IndyCar race can be seen live and ad-free on Stan Sport.