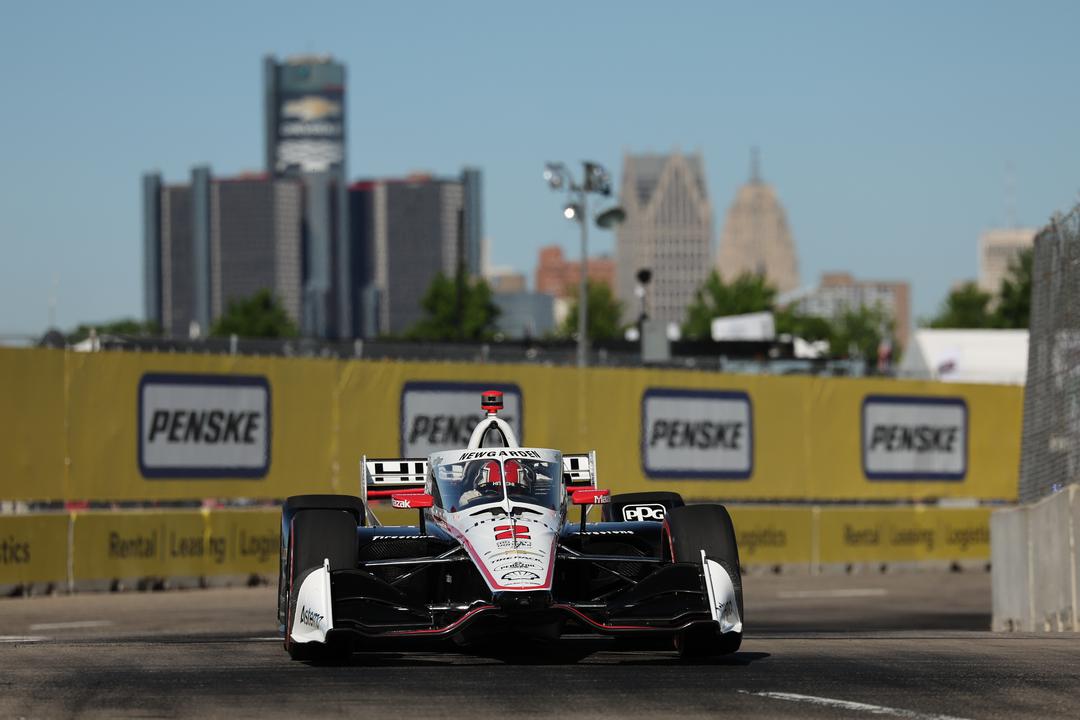 Josef Newgarden has taken pole position for IndyCar’s Detroit Grand Prix while his Team Penske team-mates Scott McLaughlin and Will Power did not make it into the Fast Six.

Newgarden was among those who went out early in the Fast Six, at which point Castroneves set the pace on a 1:15.4538s.

Sato subsequently clocked a 1:15. 4390s and was the provisional pole-sitter when the chequered flag was unfurled, after which the man in the #2 Team Penske Chevrolet achieved a 1:15.3490s to nab top spot.

The latter will thus start in seventh position, with Indianapolis 500 winner Marcus Ericsson (Chip Ganassi Racing) alongside him, and the top 10 rounded out by Scott Dixon (CGR) and Scott McLaughlin (Team Penske).

Alexander Rossi qualified 11th while his Andretti team-mate Romain Grosjean was relegated to 12th when he lost his two fastest lap times as punishment for causing a red flag.

With the chequered flag out, the Frenchman broke a toe link when he hit the wall exiting Turn 12, and that damage caused Car #28 to spin into an even harder hit with concrete as he tried to negotiate Turn 13.

Earlier, Castroneves topped Group 1 of Round 1 of qualifying and McLaughlin got through despite glancing the wall at Turn 9, but Kyle Kirkwood (AJ Foyt Racing) is set to start the race from 15th position after finishing the stanza eighth-fastest.

Kirkwood set the pace in Friday’s first practice hit-out but ended up in the barriers in Practice 2 in a clash with Malukas, and had to serve a drive-through during qualifying as punishment.

In Group 2, Malukas was quickest but there were multiple big names who failed to make the cut.

Power looked to simply struggle for pace on his way to eighth, Alex Palou (CGR) was ninth, and Felix Rosenqvist (McLaren SP) wound up 13th, meaning they will start 16th, 18th, and 26th respectively.

Palou was cleared of alleged interference of Power late in the pace, but Rosenqvist lost his two best laps for getting in the way of Jimmie Johnson (CGR).

Sharing the back row with the Swede will be Dalton Kellett, who had a crash in Practice 2 which left his AJ Foyt entry with too much damage to repair before qualifying.

The next session is the Warmup, on Monday morning at 00:15 AEST, followed by the Race itself at 05:45 AEST.

Stan Sport’s live and ad-free coverage of that 70-lap encounter begins at 05:00 AEST.