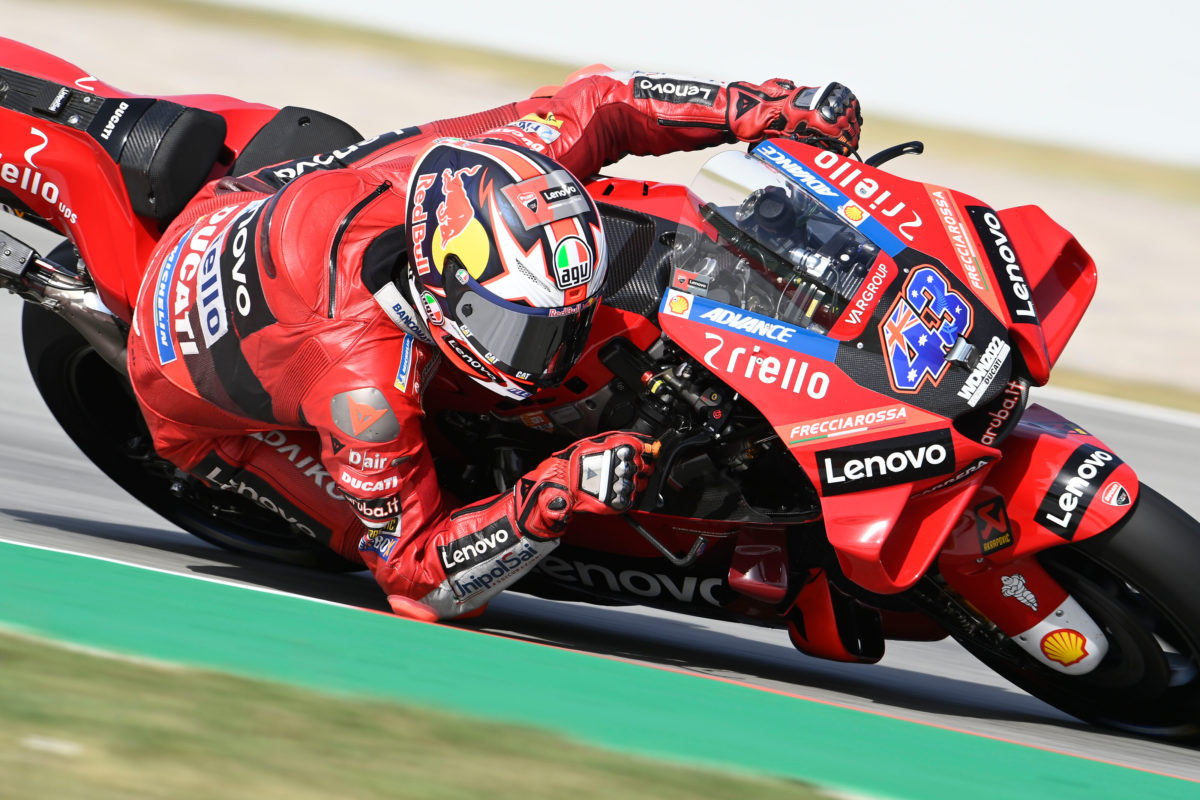 Jack Miller has been wished good luck for the future by his Ducati MotoGP team-mate, Francesco Bagnaia, amid indications he is off to KTM.

In fact, the Queenslander is “almost certain” to leave the Bologna manufacturer at season’s end, according to its sporting director, Paolo Ciabatti.

While the Ducati Lenovo Team’s second rider for 2023 has not yet been confirmed, nor where Miller will end up, all signs now point to him switching to KTM.

As such, Bagnaia was candid in the Catalan Grand Prix’s post-qualifying press conference when he was asked about his only team-mate to date in the premier class, through stints at Pramac Racing and now the official factory squad.

“For me, it was great to have Jack because we formed a group inside the team,” said the Italian.

“It’s something I really need and really want.

“We worked together from 2019 and from that moment it was the start of our relationship.

“We worked great in the box and we talked a lot of times. We speak a lot during the weekend about tyres, about everything.

“I would like to have the same relationship in the future and who will be my team-mate will understand that.

“For me, if we want to go fast and we want to improve then we have to be close and have a good relationship.

“I want to wish all the luck to Jack in his future.”

Earlier, Ciabatti was also quite open when speaking on Spanish television.

While he did not shed any light on whether Jorge Martin or Enea Bastianini will land the seat alongside Bagnaia, he did essentially confirm that Miller is gone.

“Our goal is to keep Bastianini and Martin with Ducati,” Ciabatti told DAZN.

“We’re not taking the decision about who will join the factory team yet, but it’s almost certain Miller won’t continue with us next year.”

Martin and Bastianini both debuted in the premier class last year, and the former was being seriously talked up as a future factory team rider after giving Pramac its first ever MotoGP race win, in the Styrian Grand Prix.

The latter arguably punched above his weight by scoring two podiums, both at San Marino, on a 2019-spec Ducati with underdogs Esponsorama Racing, and his three wins on a 2021-model bike with Gresini Racing are the greatest haul of any rider so far in 2022.

Martin, on the other hand, has finished just once on the podium in the first eight races of the current season, and three times in the points (top 15) in total, while crashing with surprising regularity.

However, he has been given some leeway due to his fitness, with Ciabatti also telling DAZN that a decision will not be made until some point after he has surgery to correct nerve problems in his right hand, an operation which will keep him out of Monday’s post-race test.

Meanwhile, Red Bull KTM incumbent Miguel Oliveira and father/manager Paulo were sighted in the Catalunya paddock on their way into the Gresini garage with Ciabatti.

The Portuguese rider is set to be moved out of the factory KTM squad to make room for either of Miller or Pol Espargaro, with whom the Austrian marque has confirmed it has had talks.

However, Oliveira stated at last weekend’s Italian Grand Prix that he “do[es] not accept” a demotion back to KTM’s satellite team, Tech3.