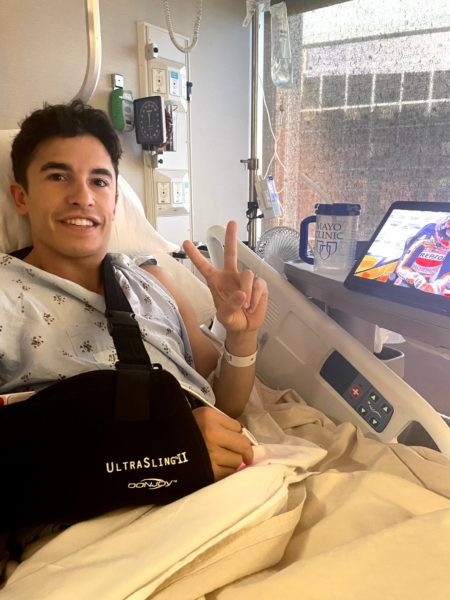 Marc Marquez’s latest arm surgery has been deemed a success, according to his Repsol Honda Team.

The six-time MotoGP (premier class) champion flew to the United States on Tuesday for a fourth operation on the right humerus which he badly broke in the Spanish Grand Prix at Jerez almost two years ago.

The procedure, a humeral osteotomy, was performed at the Mayo Clinic in Rochester, Minnesota by a surgical team led by Dr Joaquin Sanchez Sotelo, and lasted around three hours.

Marquez’s race team advised, “The surgery was deemed a success without complications by Dr Sanchez Sotelo as Marc Marquez entered the post-operative stage of his treatment at the Mayo Clinic.”

Dr Sotelo, chair of the Division of Shoulder and Elbow Surgery at the Mayo Clinic, said, “Despite the complexity of the procedure, the final outcome was satisfactory.

“Surgery consisted in removing the proximal two screws of the posterior plate previously placed by Dr Samuel Antuña on December of 2020, followed by a rotational humeral osteotomy.

“Such procedure involves creating a transverse cut of the humeral bone to rotate the humerus along its long axis.

“The amount of rotation performed today was approximately 30 degrees of external rotation.

“The humerus was stabilised in the new position using an anterior plate with multiple screws. Surgery was completed uneventfully.

“We would like to wish Mr Marquez a swift recovery and a successful return to his professional career.”

The 29-year-old has struggled for mobility on his motorcycle since making his comeback from the broken arm in early-2021, and come to rely on painkillers.

He described the day on which he learnt that doctors were recommending more surgery, that being the Friday of the just-completed Italian Grand Prix, as “one of the best days of the year”, and hopes the latest operation will allow him to live a “normal life” again.

Marquez will remain in the United States for the coming days “to guarantee his immediate post-operative recovery”, according to Repsol Honda, before returning to Spain to continue his treatment plan.

Stefan Bradl is filling in for #93 at this weekend’s Catalan Grand prix, and presumably beyond, the German ending up 23rd in Friday practice while team-mate Pol Espargaro was 11th.