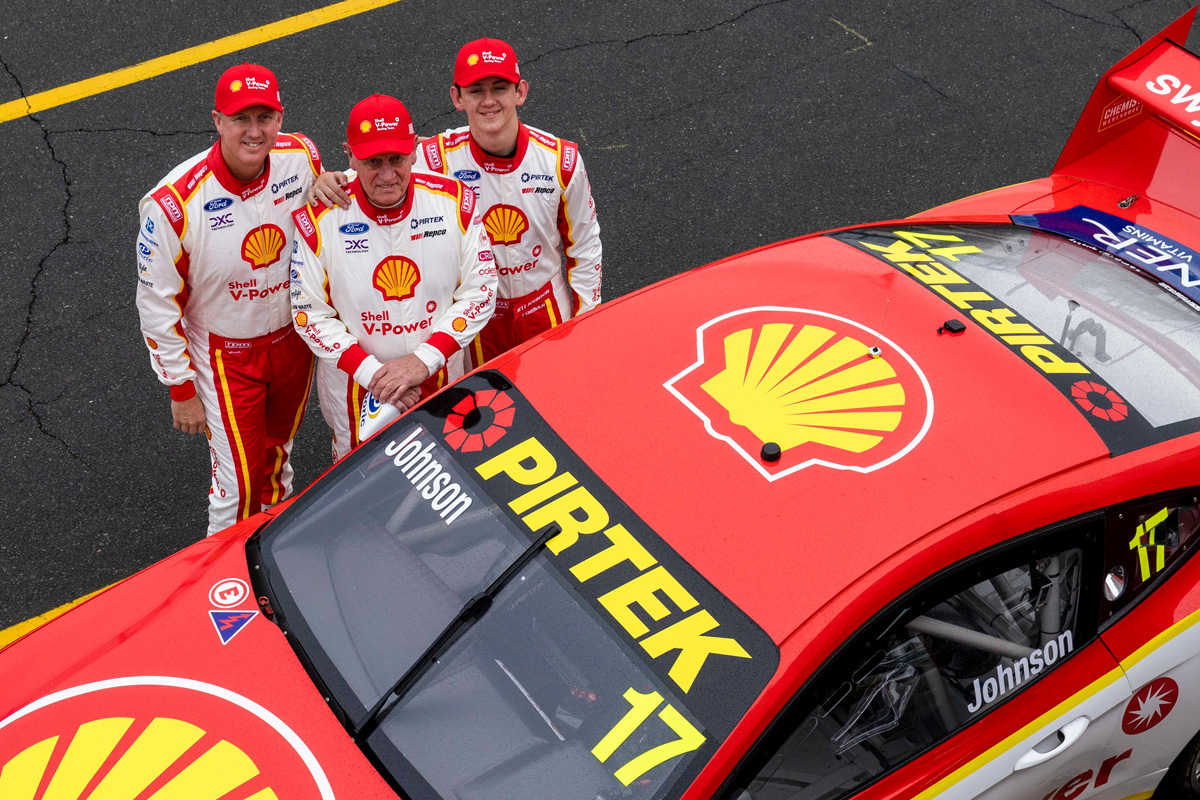 Dick Johnson pens his feelings following a rare opportunity to share the track at Queensland Raceway with son Steven and grandson Jett, all aboard #17 Shell V-Power Mustang Supercars:

Wow, what a week it has been, not only for me but for my family, the entire team at Dick Johnson Racing, motorsport fans and those who don’t necessarily follow motorsport. It was so special to do what we did on Monday at Queensland Raceway.

To be able to get into a current Supercar Ford Mustang GT with my son and grandson is a once in a lifetime opportunity and an experience I will never forget! Steven said, to walk into Queensland Raceway with three identical Mustangs was very special and also hard to tell which car to get into and I couldn’t agree more!

It’s always good to get into a race car and have a muck around, but what annoyed me the most was the weather! As soon as I sat in the car, it started to rain. And as you know, going out on slick tyres in those conditions can be tricky and the last thing I wanted to do was make a fool of myself and put the car in the sand trap. But luckily enough it didn’t rain heavily, and we were able to cruise around without incident.

To go down the main straight and see all the crew standing on the pit wall to watch was something incredible. In the lead-up, everyone was asking me how I think I would go and asking what I was expecting. They were invested and excited for Monday to happen and their interest made me excited for the day as well. Most of these guys haven’t seen me race in a long time, so to be able to experience this day with them was fantastic, especially as they see me in and around the workshop nearly every day.

To have Jillie and Bree there and the entire family of DJR staff to witness what we did on Monday was also incredible. It was a moment you needed to be there to see.

For Steven to be able to experience these laps with me and his son was an achievement we never thought we would get to and for his development, this is the next step. Jett has his own individual path to follow and fulfilling the dreams he has. He was so excited for weeks in the lead-up, coming into the workshop, working with the crew and getting laps on the simulator showed me he really wants to take those next steps to get into Supercars. For the short time he did on track, he did pretty good if I do say so myself, it was all a learning experience for him, especially as it was his first time getting into a Supercar. This will only make him hungrier to achieve his goals and make a name for himself in the industry he wants to be in.

Lastly, I want to say thank you to every single person who has sent a text, an email or commented about Monday. You have all been so positive and supportive, it means so much to me and I know it means a lot to Steven and Jett.

Thank you for all your support!