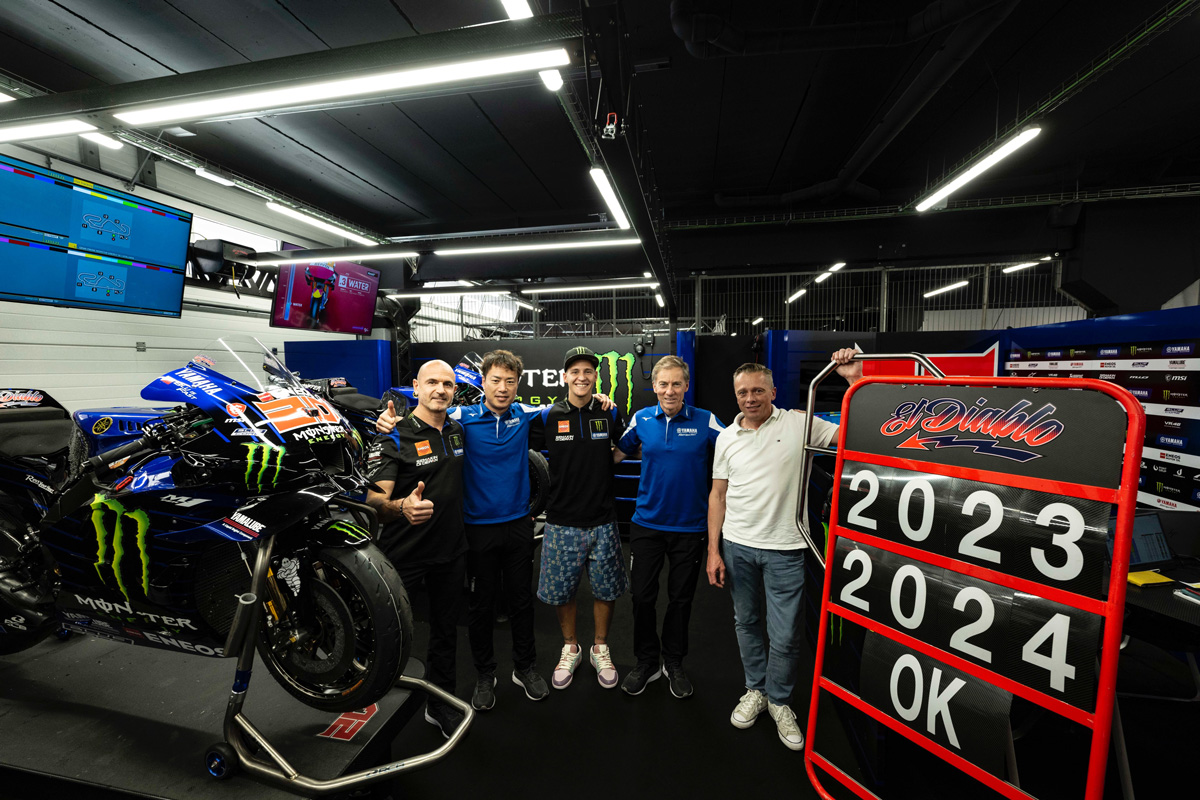 A key piece of the MotoGP silly season has been set in stone, with Monster Energy Yamaha securing Fabio Quartararo’s services until the end of 2024.

Quartararo’s future was a major talking point earlier this year, although speculation that he could be on the move seemed to quieten in recent times.

After a relatively slow start to the year, the 2021 premier class champion has worked his way to the top of this season’s standings following results of first, second, fourth, and second in his past four starts.

The Frenchman expressed his delight at the new two-year deal.

“I am really happy to announce to all of you that I will stay with Yamaha for two more years,” said Quartararo.

“In the past, moving up to MotoGP with Yamaha and later to the factory team were no-brainers.

“Yamaha believed in me from the very beginning, and that is something I do not take lightly. But that being said, this new agreement was a big decision. I’m at a great point in my career, so I took a bit more time taking this decision to be sure.

“I believe in the Yamaha MotoGP project, and I feel Yamaha are truly motivated. And now that we have officially confirmed our decision to continue on this path together, we can fully focus on the current season.

“I want to say ‘thanks’ to the people around me, who always help me and support me, as well as to the fans who are cheering me on. I really do appreciate all the support.”

Added Yamaha Motor Racing managing director Lin Jarvis: “We are very happy to have reached an agreement with Fabio to continue with the Monster Energy Yamaha MotoGP team for 2023 and beyond.

“We brought Fabio into the factory team last year knowing he is a special talent, but he even exceeded our expectations.

“One doesn’t often come across a rider of his calibre. He was already showing his talent and speed in his two years with the SRT satellite team in 2019 and 2020, but when he made the step up to the factory team, we could really see him growing stronger and maturing as a rider.

“In Fabio’s first season and a half we’ve booked many successes: six race wins, 14 podiums, six pole positions, and the 2021 MotoGP world title. These results have come from a strong team effort from the rider, his crew, our engineers, and all team staff working together with a positive ‘can-do’ spirit.

“With Fabio we know he will always put in 100 percent of his best effort, and we have assured him that Yamaha will do the same and we will invest in future developments so that together we can challenge for the MotoGP world championship titles for years to come.”

Riders expected to be on the move include Jack Miller and Pol Espargaro, currently at the lead Ducati and Honda squads respectively, while Suzuki’s impending exit has made Joan Mir and Alex Rins free agents.

Round 9 of the MotoGP season takes place this weekend at Circuit de Barcelona-Catalunya.