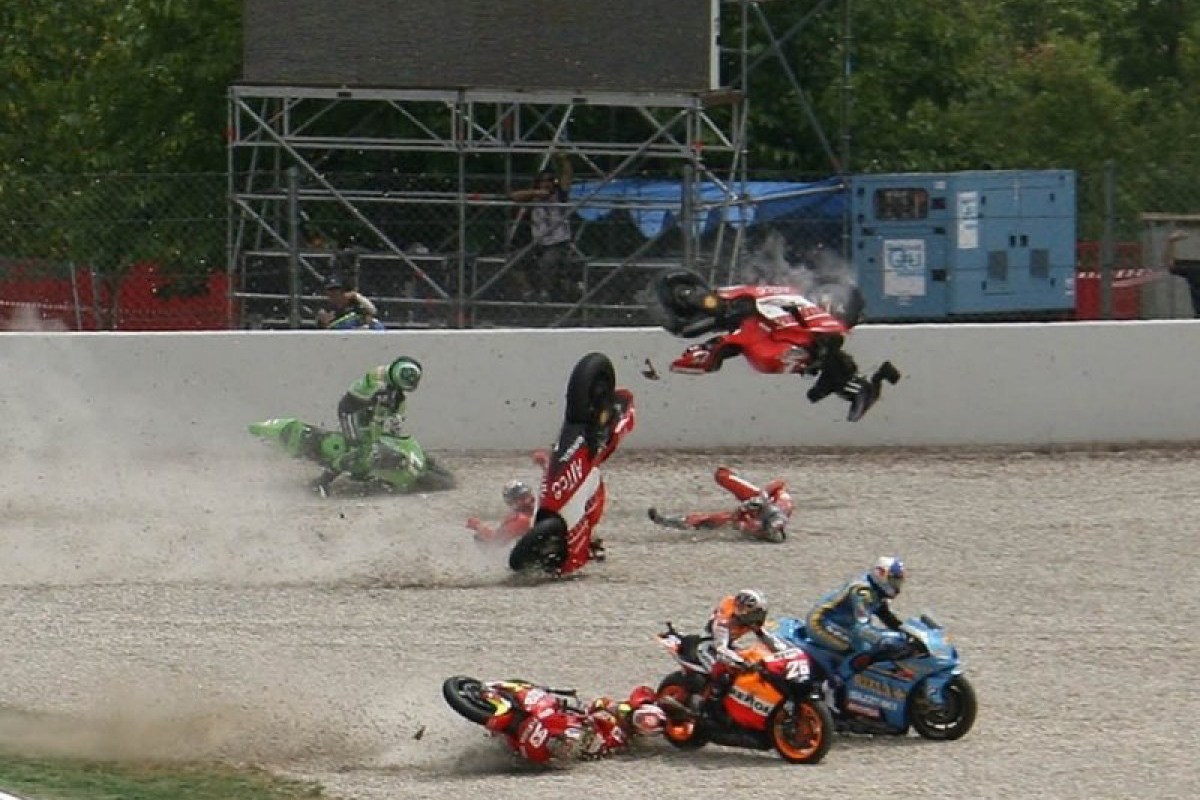 Valentino Rossi sat on pole for the race, but it was Casey Stoner who launched well to take the initial lead.

As the riders raced into Turn 1, a major incident ensued, taking out six competitors, started by the two Ducati drivers in Sete Gibernau and Loris Capirossi.

The team-mates collided side-by-side, which triggered the brake lever on Gibernau’s bike, locking the front wheel and sending Gibernau over the handlebars, taking out several others in the process.

The crash sparked the contemplation of the brake lever protector, which was then introduced into the sport in 2011, and is now mandatory in today’s racing world.

The brake lever protector was created purely for the safety of the riders, so the same type of incidents couldn’t occur again.

Unintentional braking, with enough force can flip over a motorbike at high-speed as the front wheel locks up, which is what happened to Gibernau’s #15 machine back in 2006.

This would become one of the most important safety measures in MotoGP history, as the same sort of incident occurred in 2008, involving Hector Barbera and the late Marco Simoncelli.

The 2006 race continued after a lengthy red flag delay during which multiple drivers were taken to hospital, but after his rocket start, Stoner had an incident that took him out of the race as well.

Rossi ended up beating eventual championship winner Nicky Hayden to the win, but all the attention post-race was on the Turn 1, Lap 1 incident.

After a lightning start to the season, this would be Capirossi’s only DNF – and a costly one at that, seeing as though he only finished 23 points behind championship winner Hayden.

Gibernau would miss the next two rounds of the championship, after being knocked unconscious in the accident.

Striking even more bad luck, on the way to hospital, Gibernau’s ambulance had a minor accident, though he didn’t attain any further injuries.

Gibernau sustained a concussion, a broken hand, and a re-broken collarbone, which caused him having to replace the metal plate in his collarbone.

The 2003 and 2004 MotoGP runner-up returned later in the season, collecting multiple top five results, but ended up retiring at the end of 2006, before making a brief comeback for six races in 2009.

The 2006 Catalunya Grand Prix was clearly career-defining for Gibernau, and commentators of the race said watching the accident was terrifying, but it ended up being the origin story of one of MotoGP’s most imperative safety measures; the brake lever protector.