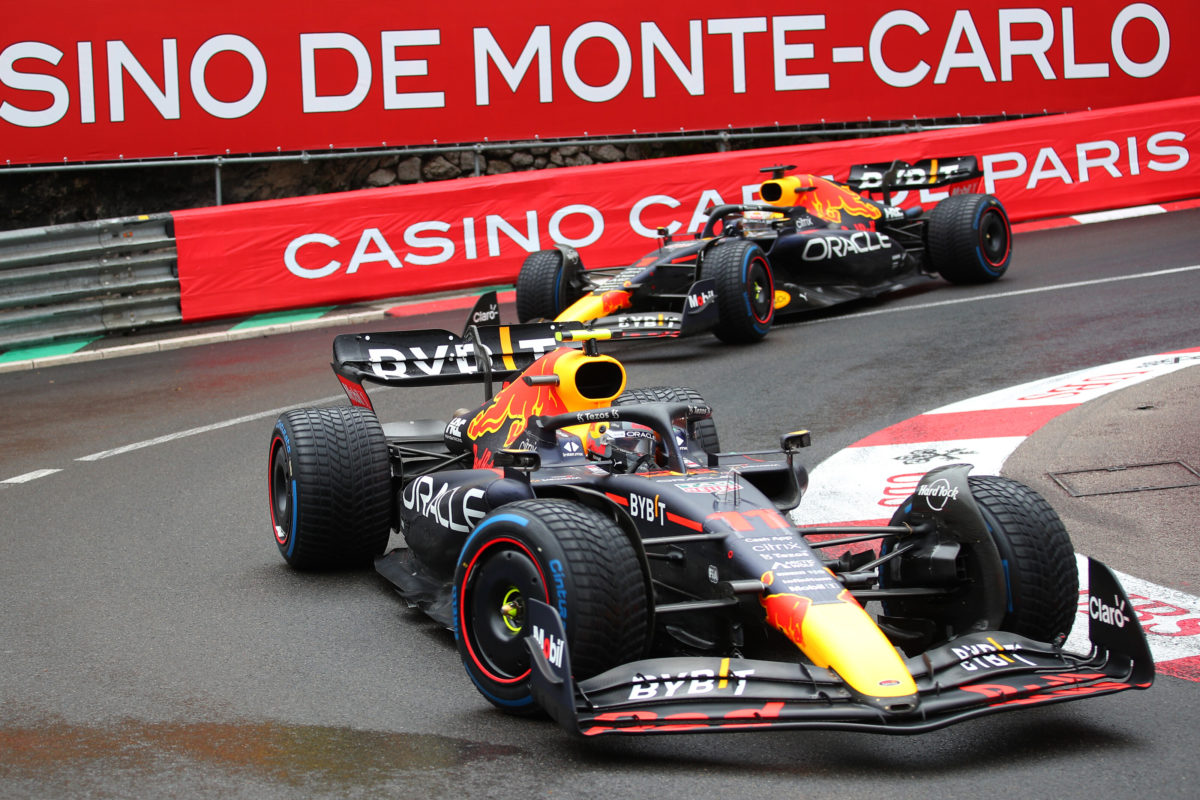 He headed Carlos Sainz to the flag with Max Verstappen completing the podium, Ferrari’s Monegasque driver Charles Leclerc slipping from pole to fourth.

Perez took the lead midway through the race as early wet conditions improved, holding on amid intense pressure in the final 20 laps.

A shower shortly before the scheduled start of the race prompted officials to suspend the start procedure due to the “change in climatic conditions”.

The delay afforded teams the opportunity to change tyres if needed, the formation lap starting behind the Safety Car 16 minutes after the scheduled start time.

Most had headed to the grid on slick tyres, fitting intermediates one the grid once conditions changed.

They then switched again to full wets as a result of the rules mandating such when the Safety Car leads the field off the grid.

The Safety Car finally led the field for less than two laps before race control threw the red flag, the field filing into pit lane without having actually commenced racing.

The interruption lasted until 16:05 local time, more than an hour after the scheduled race start, when cars finally rolled out the pit lane, again behind the Safety Car.

As the cars filtered out, Lance Stroll brushed the wall at Massenet, picking up a right-rear puncture in the process, while Nicholas Latifi nosed the wall at the hairpin.

After two laps behind the Safety Car, the race proper finally commenced with a rolling start, Leclerc finally headed the field in Sainte Devote some 69 minutes after the scheduled start time.

Pierre Gasly took to the lane to swap his full wets for inters, rolling the dice in tricky conditions.

It was probably too early, the Frenchman enjoying better pace than the midfield, but not as fast Stroll who was also in clear air on the wet tyres.

However, it wasn’t long before conditions improved such that the Scuderia AlphaTauri driver was among the fastest men on the track.

Sebastian Vettel and Yuki Tsunoda responded by taking to the lane for intermediate rubber.

The leaders still enjoyed strong pace, Leclerc holding a 3.1s advantage over Sainz, with Perez a further 2s back in third.

Conditions were continuing to improve, with lap times tumbling as a result.

Gasly was the main protagonist on track, quickly catching and passing Guanyu Zhou before engaging with Daniel Ricciardo for 12th.

The Scuderia AlphaTauri driver eased by out of Tabac, the McLaren struggling for traction on wet tyres as it slipped back a spot.

Gasly was, by some margin, the fastest car on track in free air, almost a second faster than anyone else on Lap 15.

Mercedes responded with Lewis Hamilton, fitting a set of inters as he rejoined in ninth place.

Perez followed suit on Lap 17, feeding back out into fifth place, a drop of two places.

To cover off the threat posed by the Mexican, Sainz was called in for a set of intermediates, only for the team to change its mind when the Spaniard argued the point.

Leclerc and Verstappen did stop, the pair fitting intermediate tyres.

That promoted Sainz to the race lead, though his times were some five seconds a lap slower than Perez.

Conditions were bordering on ready for slicks, Mick Schumacher braving the hard compound tyres, as did Alex Albon.

The Haas driver was enjoying strong pace, encouraging Ricciardo to put on Lap 19 to make the same switch.

Leclerc pitted once more, followed in by Sainz as they double stacked the Ferraris, both taking on slick tyres.

It was a mistake on Leclerc’s part, though understandable as the team issued mixed messages over the radio.

Next lap, Red Bull double stacked its drivers, Perez emerging in a net race lead while Verstappen rejoined third, ahead of Leclerc.

Sainz had a heart-stopping moment when he pulled off the racing line down the front straight, the Ferrari stepping out only to be miraculously saved by the Spaniard.

Schumacher then had a massive crash at the Swimming Pool, tearing the rear of the car away from the survival cell.

The end result was far more dramatic than the crash itself, the car stepping sideways and pitching him into the wall, though the German was able to climb out unaided.

Initially the incident was covered by the Virtual Safety Car, only for the full Safety Car to be quickly deployed to cover the field.

With the barrier in need of repair, the race was red flagged once again with 30 laps in the books.

It was a 20-minute interruption, the race getting back underway at 17:15 local time with a rolling start as the track remained wet off the racing line.

Under the stoppage, a number of teams fitted new tyres, including mediums for the Red Bull pairing, while Ferrari had left its two drivers on used hard rubber.

Perez led the field back to green flag conditions on Lap 33, opening a near one second advantage on the first racing lap.

On Lap 39, DRS was enabled for the first time in the race, though none of the leaders were within range to make use of it.

Eighth placed Hamilton was less than a second behind Alonso, the Alpine driver managing his time and running more than three seconds off the pace of the front runners.

Inside the final 15 minutes, the front of the race condensed, the hard compound tyres proving the better option.

Perez was hanging on, his Red Bull struggling with its tyres but with just enough pace to remain ahead of Sainz, the leading quartet covered by less than two seconds.

With six minutes remaining, the Ferrari driver attacked into Nouvelle Chicane, though the race leader was wise to the move and positioned his car in the middle of the track.

Sainz was clearly stronger under brakes, almost nosing Perez around the hairpin each lap, but never close enough to make his advantage pay dividends.

The leading train caught traffic with four minutes remaining to make for a nervous couple of moments.

Zhou stepped aside down the front straight without influencing the lead battle while a lap later it was Latifi’s turn, the Williams driver just about keeping out of the way as the lead battle entered Sainte Devote.

Perez then skipped clear on the penultimate lap, starting the final lap with a one second advantage.

He held on to win for the third time in his F1 career, with Sainz second and Verstappen third.

Leclerc was fourth, then came Russell, Norris, Alonso, Hamilton, Ocon, who had a five second penalty looming, and would ultimately drop out of the points to 12th, Bottas, and Vettel.