Hamlin wins one of the craziest races in NASCAR history

Hamlin wins one of the craziest races in NASCAR history 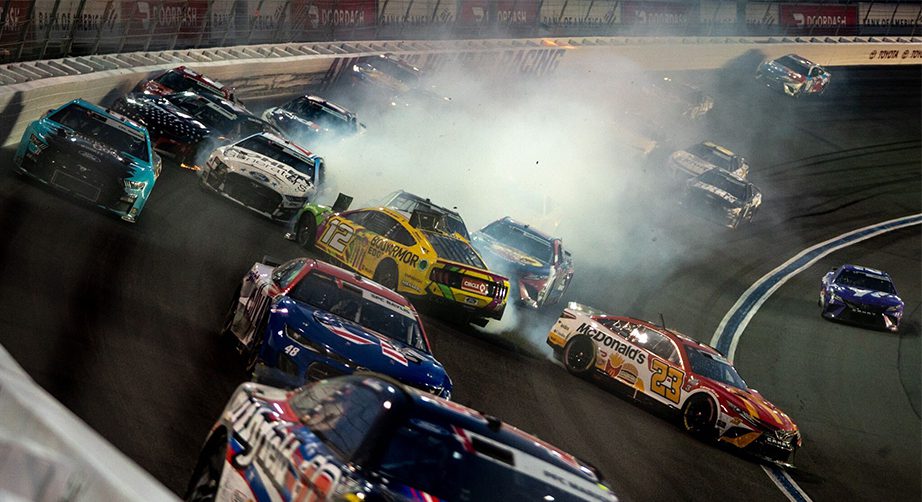 Only one car was not involved in an incident in what was the longest race in NASCAR history. Picture: NASCAR official website

The greatest day in international racing has ended with a chaotic Coca Cola 600, with Denny Hamlin taking the chequered flag after a number of huge crashes throughout the 400-lap race.

The 600-mile race marks the day that NASCAR salutes war veterans of the United States, with tributes to many special heroes throughout the race.

Heading into the race, three-time winner at Charlotte Motor Speedway Jamie McMurray said the race isn’t as physically taxing as it is mentally, though it was a warm day in North Carolina.

After the green flag dropped, Hamlin and Kurt Busch battled side by side for four laps, but Kyle Busch took the lead with Bubba Wallace in second before the first Caution came out on Lap 17, after a three-car pile-up involving Chris Buscher, Ryan Preece and Noah Gragson.

On Lap 45, Kyle Busch and Daniel Suarez were racing hard for the lead when Kyle Busch lost control and spun around in Turn 2.

Kyle Busch was able to continue and work his way back up to the lead.

Young guns Bubba Wallace and Corey LaJoie both also had trouble controlling their cars on the slick track separately spinning around early on in the race.

Wallace was able to save his car from further damage, but it was LaJoie’s #7 machine which sustained it and retired from the race.

After just 60 laps, there had already been four Caution flags, which equalled the total in the 400 laps of last year’s race.

After hardcore racing in Stage 1, Chase Elliott was able to beat Tyler Reddick to victory in an entertaining battle.

The race continued to prove difficult for many, spelling trouble for Elliott, Austin Cindric, and Kyle Larson.

Larson described the first 150 laps of the longest and hardest race of his life, starting from the back, having multiple penalties and multiple issues on pit road, including briefly catching on fire.

After Elliott’s spin, the field restarted with nine laps remaining in Stage 2, but on the restart, the ‘big one’ happened in Turns 1 and 2, collecting a total of 12 cars in the melee.

Ryan Blaney’s Ford spun in the middle of the track, collecting the likes of Kurt Busch, William Byron, Brad Keselowski and more.

After another restart, Daniel Suarez won Stage 2, with 24 of the 37 cars being involved in an incident by the halfway point.

Rookie Noah Gragson was having a fantastic race, running inside the top 10, before spinning out on lap 253.

In-form Ross Chastain was able to win Stage 3, and looked to be the favourite to take the win heading into the final 100 laps.

After Tyler Reddick spun racing in the top five, the field reset with 56 laps remaining, but one lap later, Suarez’s car went around on the front straight, collecting Todd Gilliland and Chris Buescher.

Buescher’s broken suspension dug into the turf, which sent the Roush Fenway-Keselowski Racing driver on his lid, rolling over five times before coming to rest on his roof.

Buescher was okay after he climbed out of his car, but said that the wreck did hurt, comparing the big crash to his last rollover at Talladega in 2016.

“That was a little painful, it’s quite a shame, our Mustang was really good tonight,” Buescher said.

“I have been upside down before, but that one was a little more painful than the Talladega roll.”

After the restart, Kyle Larson took the lead with just 50 laps remaining, and was on track to make one of the most amazing recoveries in recent memory to go for the win.

Racing hard for the lead, Larson and Chase Briscoe had a big showdown going for the win, which resulted in Briscoe’s car spinning with just two laps remaining, sending the field into NASCAR overtime.

One lap after the restart, Chastain, Larson, Hamlin and Austin Dillon were four-wide coming off of Turn 4, which resulted in a big seven-car crash just before they took the white flag.

Joey Logano’s car took arguably the hardest hit, as the Penske driver gingerly walked away from his car.

On the final restart, and what is now the longest race in NASCAR history, Hamlin was able to hold off teammate Kyle Busch to take his second win of the season.

“It’s so special, this one is the last big race that’s not on my resume and it meant so much and I just can’t thank this whole Fed-Ex team enough,” Hamlin said.

“We weren’t very good all day, we just got ourselves in the right place at the right time.”

A disappointed Kyle Larson reminisced on his long race, eventually finishing in ninth.

“Yeah, long race, I mean the first half was a struggle for all of us, but I was especially frustrated with myself,” Larson said.

“To rebound from that and to have a shot to win there was something to be proud of, and our team fought really hard, so we’re happy with that.”

Richard Petty Motorsports driver Ty Dillon was the only car not to be involved in an incident all night, ending his day in 13th position.

This race will go down in history, with 31 lead changes and 20 Cautions, almost breaking the record for most cautions in a NASCAR race.

NASCAR Cup Series competition resumes next week with a first ever visit to World Wide Technology Raceway (otherwise known as the Gateway).