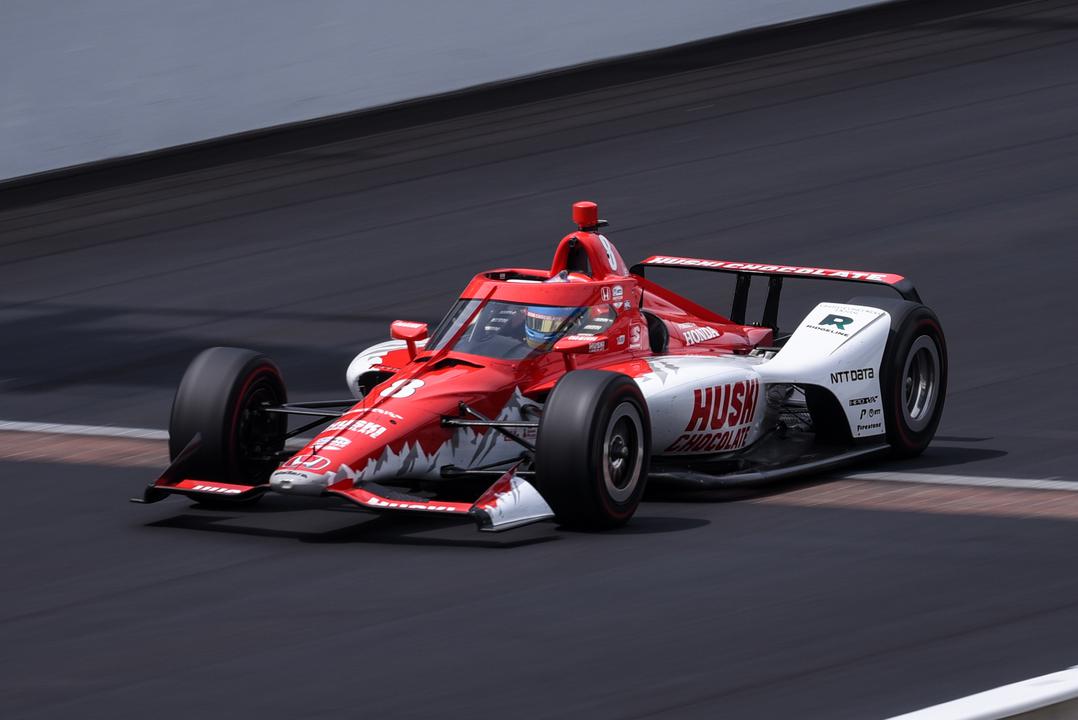 Marcus Ericsson has won the Indianapolis 500 in a grandstand finish while Chip Ganassi Racing team-mate Scott Dixon fell out of contention due to a speeding penalty.

The Ganassi entries were at the centre of the action throughout the 200-lap encounter for varying reasons, with Jimmie Johnson’s late crash in its #48 Honda forcing Ericsson to defend his lead in a two-lap dash to the chequered flag.

In the end, he would only have to survive a lap-and-a-half once Sage Karam (Dreyer & Reinbold Racing) hit the wall, locking the Swede into his first Indy 500 victory, ahead of McLaren SP’s Pato O’Ward and the #1 Ganassi car of Tony Kanaan.

Dixon led much of the race but was pinged for speeding on his way into pit lane with 25 laps to go, ruining his hopes of a second Indy 500 win before he eventually finished 21st.

In the other Ganassi car, Alex Palou took ninth but arguably deserved far better considering an unfortunately timed Caution forced him into pitting while the lane was closed in order to save himself from running out of fuel.

Team Penske’s best was Josef Newgarden in 13th in the #2 Chevrolet, with Will Power 15th and Scott McLaughlin crashing out.

Dixon led the field to green at the start but ceded first position to Palou on the opening run down the back straight.

He soon fell behind Ed Carpenter Racing’s Rinus VeeKay as well, until he re-passed the Dutchman on Lap 4, then it became clear that CGR was playing a fuel game as Dixon and Palou took turns leading.

Dixon was first when he pitted on Lap 30, Palou was in a lap later, and then VeeKay took service on Lap 32.

When that all shook out on Lap 36, Palou was back in front after some more games with his Kiwi team-mate, but VeeKay soon split them.

However, the Dutchman was out of the race on Lap 39 when he got loose and hit the wall at Turn 2.

As for Penske, Newgarden was 10th and McLaughlin sat 17th after a strong opening stint from 26th on the grid, but Power had already slipped to 23rd before he took another stop under Caution and resumed in 30th.

The restart came on Lap 47, before O’Ward went down the inside of Ericsson next time through Turn 1, while Cars #9 and #10 continued to swap spots in order to share the fuel burden.

Dixon was running second to his Spanish team-mate when he stopped for a second time on Lap 68, two laps before Callum Ilott (Juncos Hollinger Racing) crashed at Turn 2.

The Caution had major ramifications because Palou was low on fuel and had to take an emergency stop before pit lane officially opened.

By the time everyone had been through for a predominantly yellow flag set of stops, Dixon led Conor Daly (ECR), O’Ward, Ericsson, and Kanaan, with Newgarden ninth, McLaughlin 14th, Power 23rd, and Palou 30th with his penalty.

Restart 2 took place on Lap 77, after which it looked like Dixon and Daly had decided to pair up for the fuel-save dance, while O’Ward and Ericsson seemed to get into a battle for third spot.

As the race moved past its halfway mark, Dixon started to put the hammer down, and he had not long moved a full second clear when O’Ward passed Daly for second spot at the start of Lap 105.

Daly pitted when they next got back to the front straight and the timing proved perfect when Romain Grosjean (Andretti Autosport) spun out of 10th and into the wall at Turn 2 on Lap 106.

Dixon had to coast in a bid to ensure he would not suffer the same fate as Palou but pit lane opened just in time for the six-time IndyCar champion.

At the Lap 113 restart, Dixon got a good launch but O’Ward jumped both him and Daly.

Ferrucci even briefly got ahead of Daly although he was back to fourth before he got rounded up by Rosenqvist on Lap 115.

As the race settled into something of a rhythm, Dixon put the foot down and was three quarters of a second ahead of O’Ward when he pitted with 60 laps to go.

Once the cycle was done, the #5 Chevrolet led the #9 Honda, the #7 Chevrolet of Rosenqvist, then Daly, Ferrucci, Ericsson, and Kanaan, with McLaughlin 13th, Palou 17th, Power 20th, and Newgarden 24th.

A fourth Caution was called on Lap 152 when McLaughlin smashed into the wall at the end of the back straight while running 11th on merit, but the fuel range was such that none of the front-runners bothered to stop.

They took the green again on Lap 158, at which time Dixon rounded up O’Ward and Ericsson put a move on Ferrucci for fifth spot.

Rosenqvist was first of the big hopes to pit again on Lap 171, before Dixon peeled off from a lead of around 0.4s on Lap 175.

He locked up on his way into the lane and would be issued a drive-through penalty for a speeding infringement, having also been overtaken by Rosenqvist on his out lap anyway.

O’Ward stopped on Lap 177 and rejoined between his team-mate and Ericsson, who passed Car #5 for an effective second position when he went around the outside at Turn 1 on Lap 182.

Rosenqvist lost the effective lead to his fellow Swede at the start of Lap 174, then another position to team-mate O’Ward on the next lap, and would soon be an effective fourth once Kanaan also got by.

When Johnson pitted and the cycle was complete, Ericsson had an advantage of more than three seconds with just 11 laps to go, from O’Ward, Kanaan, Rosenqvist, and Takuma Sato (Dale Coyne Racing w/ RWR), with Palou 10th, Newgarden 19th, and Dixon 26th.

The margin from first to second was still 2.7s when Johnson had a big crash at Turn 2 and brought out the yellow flags on Lap 195.

The Caution was upgraded to a red flag in a bid to get a green flag finish, setting up a two-lap dash once the field was released from behind the Pace Car again.

Kanaan had to hang on around the outside as Rosenqvist tried the pass when that 199th lap got away, and then O’Ward had a big look to the outside of Ericsson when they piled into Turn 1 after taking the white flag.

However, he chose to get out of it, and that gave Ericsson the break he needed even before Karam drew another Caution moments later.

In addition to the five crashers, Colton Herta was not running at the finish due to a throttle sensor problem for the #26 Andretti car.

Next up for the IndyCar Series is the Detroit Grand Prix, on June 3-5 (local time), with live and ad-free coverage on Stan Sport.