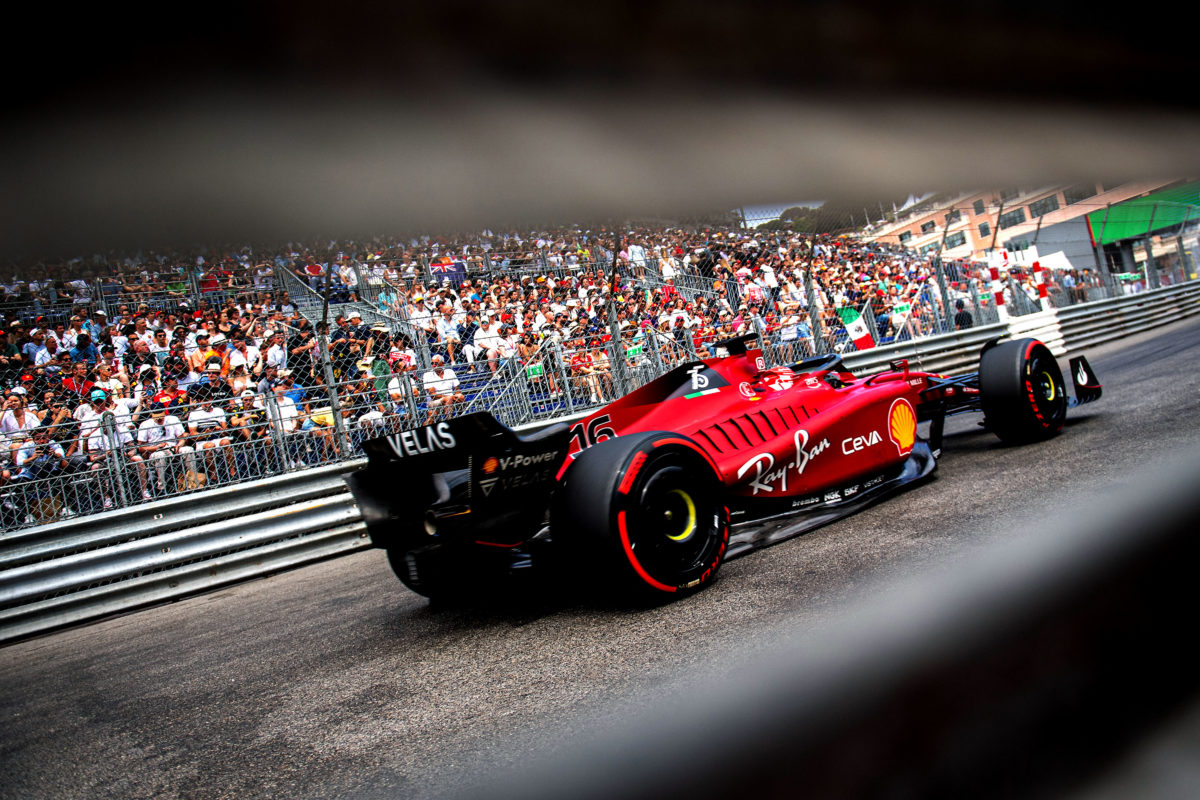 A late red flag in qualifying robbed Charles Leclerc of the opportunity to complete a lap that would have seen him on pole for the Formula 1 Monaco Grand Prix by an even greater margin.

The Ferrari driver will start the race from first place on the grid.

He’ll be joined on the front by team-mate Carlos Sainz, despite the Spaniard being involved in a crash with Sergio Perez inside the final minute of Qualifying 3.

Perez lost control at Portier, tagging the wall moments before Sainz arrived on the scene.

While that was taking place, Leclerc was up the road on course to improve on his provisional pole time.

“The first lap was good,” the Monegasque said of his first run in the final part of qualifying.

“Obviously I waited for Q3 to start and push, and it was a really good lap, but the one that I’m particularly happy about was the second lap in Q3 that I didn’t get to finish.

“This one was really, really good.”

The final margin to Sainz after Qualifying was 0.225s, though that could have been well over half a second according to Leclerc, who was more than four tenths up when the session was halted.

“A bit everywhere,” he said when asked where he gained time on the second lap.

“First corner was quite a bit better, I got a snap – basically I got snaps everywhere, but the lap time was coming.

“I was surprised by how much pace there was because the balance was really, really tricky on that lap.

“But yeah, it felt really good.”

While Leclerc will start from pole, the second year in a row he’s proved fastest on Saturday, his session was not without incident.

During Qualifying 2 he was called to the weighbridge as he returned to the pits, but missed the signal instructing him to stop.

Quick thinking from the pit wall alerted its driver to the issue, mechanics pushing him back to the scales without further issue.

“It’s a very tricky one here because we get into the pits – I don’t even know where the panel is, either it’s on the right or the left,” Leclerc said of the mix up.

“It’s very far right or far left and so you don’t look in that direction, so I actually didn’t see at all that I was called to the weighbridge.

“Luckily for me the team saw the alarm and just told me to stop and they pushed me back.”

Had Leclerc returned to the garage instead of stopping out front of the Mercedes pit box he’d have likely copped a penalty.

Instead he’ll line up on pole position for his home race, heading an all-Ferrari front row, while title rival Max Verstappen will start fourth on an all-Red Bull second row.

The Monaco Grand Prix gets underway at 23:00 AEST tonight.