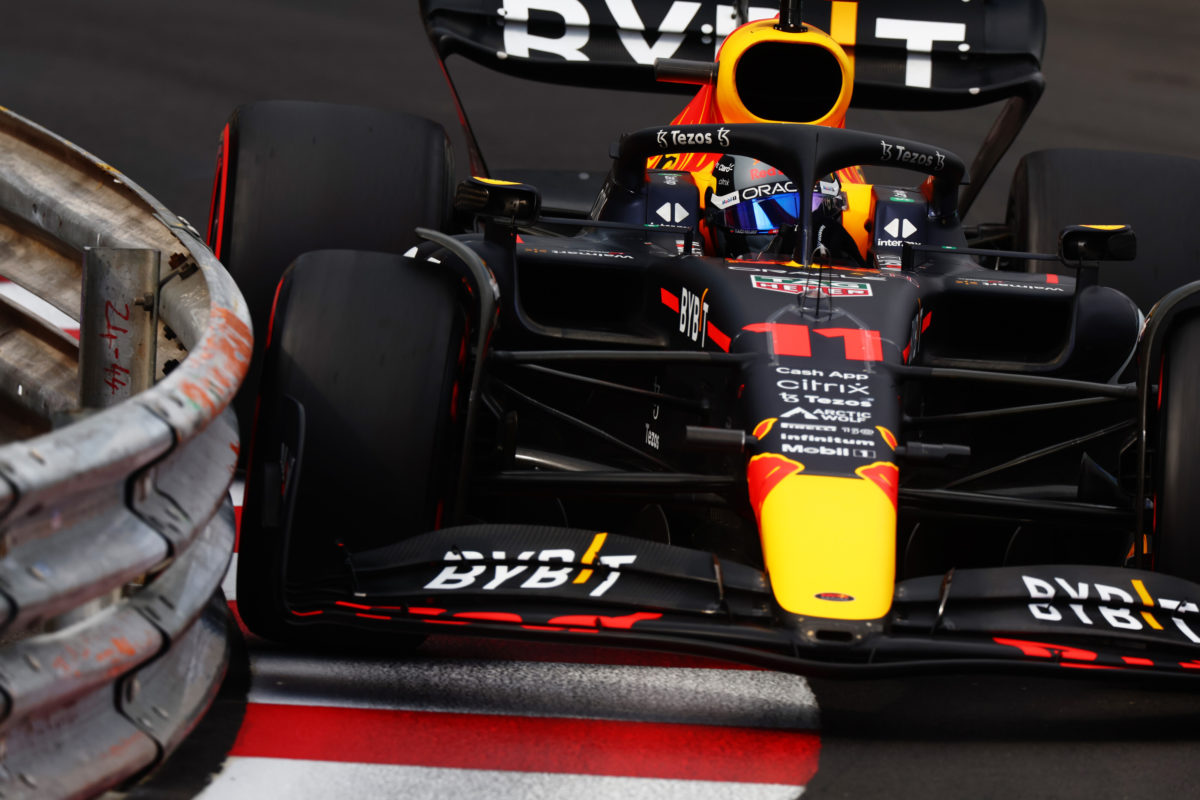 Red Bull mechanics have been left with a busy night ahead after Sergio Perez crashed out of qualifying for the Formula 1 Monaco Grand Prix.

The Mexican driver lost control of the RB18 as he rounded Portier on his final flying lap in Qualifying 3, tagging the barrier before being collected by Carlos Sainz.

With the track blocked by the incident, the red flag was shown, confirming Ferrari’s Charles Leclerc on pole position for Sunday’s race from Sainz, while Perez will line up third.

“It looked bad,” the Red Bull driver said of the damage to his car.

“Certainly it looked bad from the rear, and then what made it worse was the hit we got from Carlos.

“We have quite a bit of damage, but we’ll see, I think it should be okay for tomorrow.”

Sainz was the next car on track and arrived at Portier shortly after the yellow flags were shown.

“Coming obviously from a blind corner that its Turn 7, you do Turn 7, you go full throttle, and as I was entering Turn 7 on my left-hand side, I see a yellow flag coming out,” the Spaniard explained.

“And immediately, as I see a yellow flag, I realised that the car in front of me had crashed.

“You don’t see where he has crashed, so you enter the corner without knowing where he’s going to be.

“So I just hit the brakes, try to do the corner radius as tight as possible.

“Just as I was going to manage to avoid him, I hit the brake a bit harder and managed to clip his back with the back of the car.

“It would have been a pretty good save if I would have saved it, but because there was basically not time to save it.”

Following the crash, Perez visited the medical centre after the g-force meter was triggered in his car.

“I think there was a technical issue apparently, because the G [force] I got was something like 20, but it’s quite a low speed section and luckily there are TecPros there,” the 32-year-old explained.

“Just a shame what happened because I think we had more pace than that,” he added.

“I think the strategy with the tyre, especially the final set, it wasn’t up to temperature, and it was just too peaky – I nearly lost it already into Turn 1, and in hindsight I think we didn’t get it right today.”

Perez had traded fastest laps with Leclerc during Free Practice 3 and looked the most likely of the two Red Bull drivers to challenge the Ferrari for pole position.

Ultimately the crash was a result of driver error, a case of taking too much risk on a circuit that carries with it heavy penalties for overstepping.

“Basically I was, I think, quite close to my time, trying to make it up,” Perez set of his lap up to the crash.

“Turn 8 has been a difficult one for me throughout the qualifying session, so I was trying to anticipate and get quite early on the throttle.

“As soon as I touched the throttle I could feel like the rear tyre was not gripping in, and I was playing with it a bit until I lost it.

“Then I was actually surprised that Carlos hit me at the time.

“Just a shame what happened, and I feel sorry for Carlos and for the rest of the guys but, you know, this is Monaco.”

The Monaco Grand Prix gets underway at 23:00 AEST tonight.