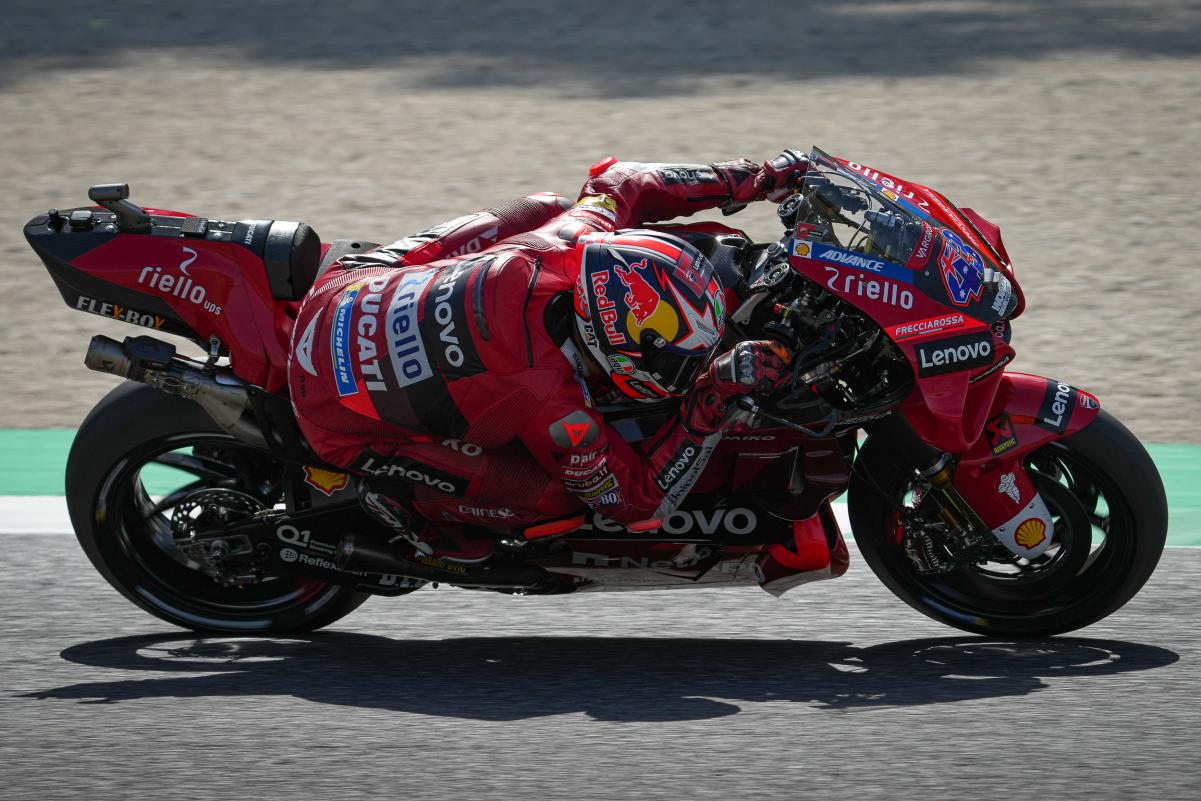 Jack Miller has been left to lament being “the donkey” after qualifying 13th for the Italian MotoGP on a day which unravelled due to a technical issue.

The Ducati Lenovo Team rider is set to start 12th in tonight’s (AEST) race, due to a grid penalty for Jorge Martin, but failed to make it out of Qualifying 1 at Mugello.

A shower during Free Practice 4 made for uncertainty about whether wet or slick Michelin tyres were the best option, and a mid-session switch from the former to the latter despite continued spits of rain caused further trepidation in Q1.

It was in the latter minutes of that session that Miller found himself being followed by Marc Marquez, with Fabio Di Giannantonio only slightly further back.

The Queenslander was able to continually improve his lap time, but his reference meant that the Repsol Honda rider and Gresini Ducati pilot were able to better him each time through.

Miller thus got stuck in third position at the end of the opening stanza of qualifying, whereas both Marquez and Di Giannantonio advanced to Qualifying 2, with the latter going on to take pole.

“It’s one of those things; you don’t really know how hard you can push because it’s raining the whole time on your visor, so you’re just sort of, every corner, going into the dark,” the man known as ‘Jackass’ told MotoGP’s official website.

“But when you’ve got a marker – someone who you see that is surviving the corner – then it makes life a little bit easier, and unfortunately today I was the donkey and it didn’t pay off.”

Miller said that he dropped into Q1 due to a chain reaction caused by a technical failure earlier in the day.

Almost as soon as he went out in Free Practice 3, the last chance for riders to try and earn direct passage to Q2, he pulled off due to an issue with his Desmosedici and had to revert to his second machine once he got a lift back to the paddock.

“We started the day with the bike stopping on the first flying lap, so it’s not an ideal way to start the day,” noted the 27-year-old.

“It ruined the strategy in terms of the tyre plan; the only option we had if we wanted to make more laps on the second bike, apart from the new tyres at the end, was to go with the pre-heated tyres that were already pre-heated before yesterday.

“They honestly gave me a terrible feeling, we could see a big difference in the data, so it was no sense to go out with them. They give you a bad feeling; that’s it.

“So, I waited, went out on one tyre, had a bit of time in between, and went out on the second tyre, but when you wake up and you’ve got to go and immediately throw a lap time at it, it’s not the most ideal situation.

“Yeah, I was able to improve, but not enough.”

Not only did Di Giannantonio claim pole on a Desmosedici GP21, the top five in qualifying was a complete Ducati sweep, rounded out by Miller’s factory team-mate Francesco Bagnaia.

Race start at Mugello is scheduled for 22:00 AEST.