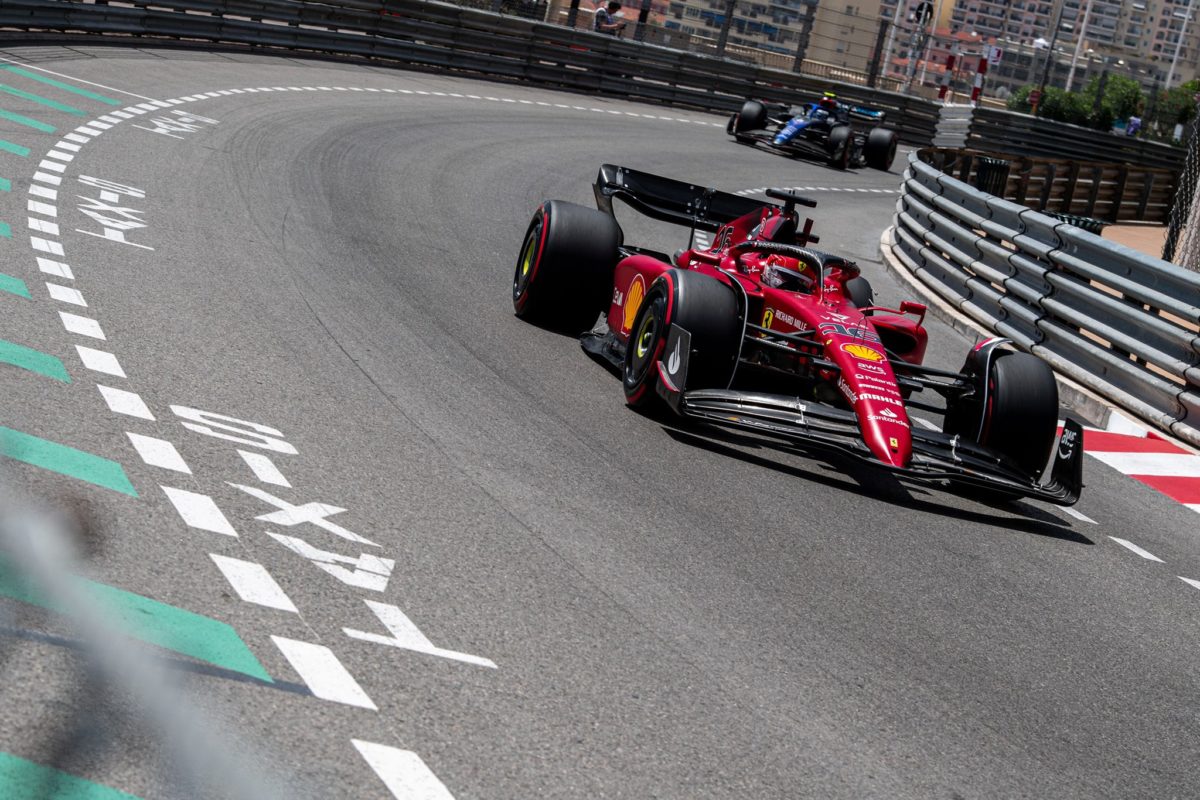 A chaotic conclusion to qualifying at the Formula 1 Monaco Grand Prix saw Charles Leclerc fastest while Sergio Perez and Carlos Sainz crashed out.

Leclerc set the fastest time, and was on target to improve further, before a red flag was shown after Perez crashed at Portier.

He was then collected by Sainz, who was next on the scene, the pair blocking the track to draw the red flags with less than a minute left in the session.

Qualifying started with all 20 cars heading out almost immediately, making it difficult to find clear space for a timed lap.

All 20 drivers had the red walled soft tyres bolted on, track temperatures well down on what was seen in Free Practice 3 just two hours earlier.

Fernando Alonso upset the establishment when he recorded the fastest time, a 1:14.148s to demote the two Red Bulls.

That was until the pair improved, Perez logging a 1:13.292s – Sainz recording an identical time seconds later to slot into second.

Leclerc then usurped the pair with a 1:12.939s to top the session, the Ferrari versus Red Bull battle from practice resuming.

The Monegasque then went quicker still, improving to 1:12.569s to leave himself 0.4s clear of Verstappen in third, Sainz second fastest just 0.047s off the pace of his team-mate.

With less than three minutes remaining, the red flag was thrown with no immediate reason why.

Yuki Tsunoda had brushed the barrier at the Nouvelle Chicane, picking up a puncture, but there was otherwise no clear reason for the stoppage.

It was brief interruption as a result, but came such that the McLaren pairing of Lando Norris and Daniel Ricciardo were at risk; the former in 15th and the latter 16th.

There was enough time to get back around and complete a flying lap, though it was tight for those not at the front of the queue as the session went green again.

None of the top five had bothered to head out; both Ferraris, Red Bull and George Russell all confident with their times such that they adopted a watching brief.

The McLaren pair were fifth and sixth on the road, ensuring they would make the line before the chequered flag waved, while a number Zhou Guanyu and Pierre Gasly were not so fortunate.

Norris logged the fifth fastest time to safeguard his passage through, as did Ricciardo with the 11th best time.

Eliminated from the session were Alex Albon, the unfortunate Gasly who missed the chance to start a final flying lap by a matter of metres, Lance Stroll, Nicholas Latifi, and Zhou.

Qualifying 2 began with Leclerc, Sainz, and Perez all setting near identical times, the latter fastest of the three with a 1:12.059s.

Verstappen was some way adrift after his first flying lap, improving on his next but still 0.294s down on his team-mate.

Leclerc improved with his second effort with a 1:11.864s, a time 0.09s better than what Perez had improved to.

As the Ferrari driver returned to the pits he missed the weighbridge, stopping in pit lane and being pushed back by team mechanics.

Ricciardo improved to 10th with a run with three minutes remaining, moving himself out of the drop zone, but only just.

He was quickly demoted back into the drop zone when Tsunoda improved to seventh.

The Australian completed a cooldown lap as the bulk of the field returned to the track for a final flurry, setting an improved time at the final effort.

It wasn’t enough and as the chequered flag fell, Ricciardo found himself 14th, some 0.7s slower than Norris who progressed with the fifth fastest lap.

He was joined on the sidelines by Tsunoda, Valtteri Bottas, Kevin Magnussen, and Mick Schumacher.

Leclerc set the pace as Qualifying 3 began, a 1:11.376s at the first time of asking, an improvement of some 0.5s over his Qualifying 2 effort.

Sainz went second best with his first lap, 0.2s slower than his team-mate, while was shadowed by Perez and Verstappen at 0.253s and 0.290s down on Leclerc’s lap respectively.

Norris was fifth best after the first laps, then came Hamilton, Russell, and Vettel.

The Alpine pairing ran off sequence, Alonso rising to fifth with his first lap midway through the segment while Ocon in the sister car was only 10th with a 1:13.047s.

As the session built to its crescendo, the red flag was shown when Perez and Sainz crashed at Portier, blocking the track.

At Mirabeau, an Alpine looked to have nosed into the barrier at about the same time in a chaotic conclusion to qualifying.

Perez had lost the rear as he turned onto the harbour front, collected by Sainz who was next on the scene.

The Mexican remained third with Verstappen fourth, the Dutchman caught in the traffic jam triggered by his crashed colleague.

Norris was fifth best from Russell, Alonso, Hamilton, Sebastian Vettel, and Esteban Ocon to round out the top 10.