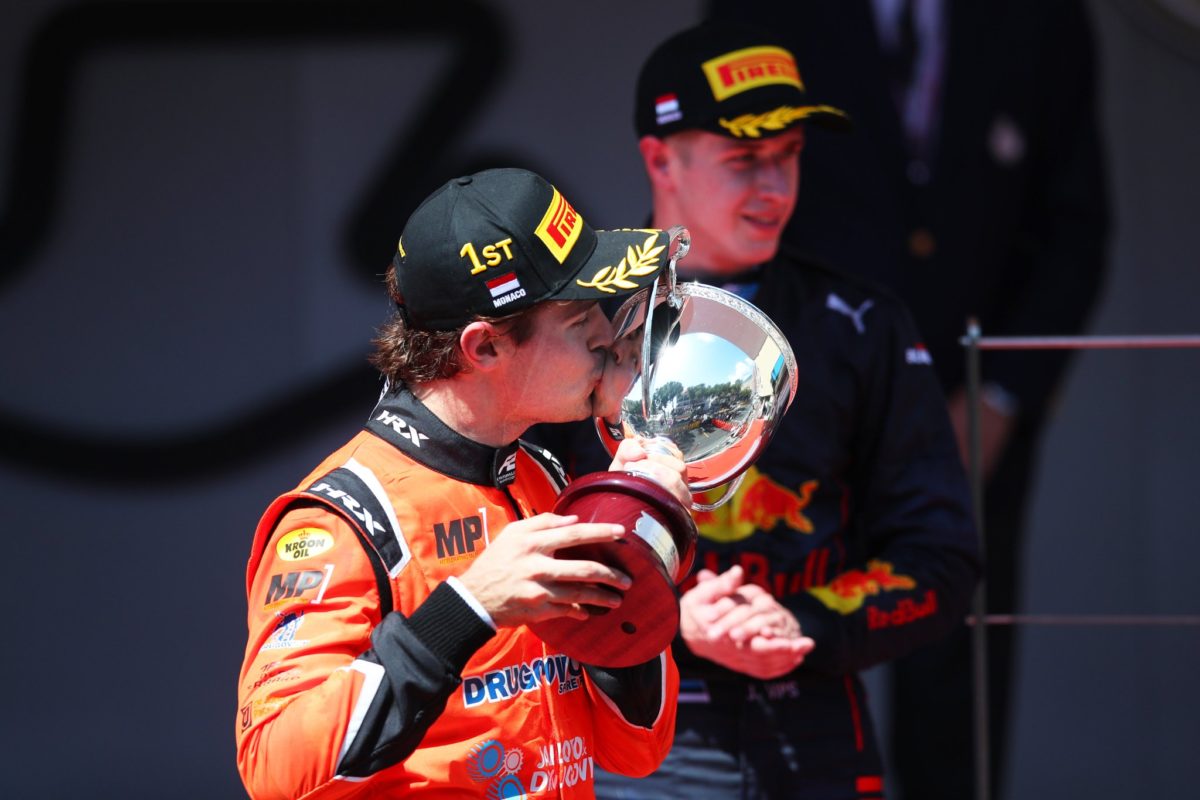 Championship leader Felipe Drugovich has won the Formula 2 Feature race on the streets of Monaco.

The Brazilian withstood strong pressure from Theo Pourchaire in the second half of the race to snag his third win in four starts, while Jack Doohan fell one place to finish fourth.

Drugovich held the lead off the line as Pourchaire swept across the road to fend off Doohan, who remained third as they headed into Sainte Devote.

Dennis Hauger rose to fifth on the opening lap, a four place improvement, three of those on track after Liam Lawson, who started from the pit lane, was accounted for.

Calan Williams dropped a spot to Ayumu Iwasa at the hairpin on the Lap 1, the Japanese driver stealing away the final points-paying position.

In the opening laps, the pole-sitter opened a comfortable lead over Pourchaire, with Doohan slowly drifting back in third as he managed the attentions of Juri Vips.

The Australian was something of a cork in the bottle, with Vips, Hauger, Enzo Fittipaldi, Marcus Armstrong, and Jehan Daruvala all in train behind the third placed runner.

Iwasa and Logan Sargeant pitted on Lap 9, looking to emerge with clear track and make inroads on the alternate strategy.

That triggered a number of others who followed suit over the laps that followed, including Hauger who’d been running fifth prior to his stop.

Over the radio, Doohan was instructed to leave nothing on the table as he looked to cover off those who’d already taken to the lane.

He immediately lifted his pace, quickly sprinting clear of Vips with times faster than those ahead, though a second slower than Hauger was doing at the same time.

That was the battle, the front of the field trying desperately to sprint away such they would maintain an advantage over those who had already stopped.

Hauger was the first on the alternate strategy, his cause hindered as he caught Lawson, who was yet to pit, slowing his progress and opening the gap back up to the front of the race.

On Lap 18, Cordeel lost the rear exciting the final corner, tagging the wall to draw the Safety Car.

Those who hadn’t stopped dived into the lane, their progress slowed as the stricken MP Motorsport entry was pushed clear, having stopped adjacent to pit exit..

Doohan slipped behind Vips in the lane to sit fourth, Drugovich maintaining the lead over Pourchaire.

It was good news for Williams, the Aussie also stopped under the Safety Car to sit seventh, one spot up from Hauger.

The Safety Car was withdrawn at the end of Lap 21, Doohan locking up into Sainte Devote as racing resumed.

It was a brief resumption as Clement Novalak stopped on the exit of the hairpin on Lap 23 after a clash with Lawson.

Racing resumed once more on Lap 26, Drugovich again clear out front from Pourchaire and Vips while further back, Hauger had found a way by Williams to move up to seventh.

The battle at the front soon began to heat up, with Pourchaire turning up the pressure on Drugovich on Lap 29, pulling clear of Vips in third.

There was nothing between the two, the Frenchman glued to the gearbox of his Brazilian rival, who began to cover his lines.

It threatened to become a three-way scrap out as Vips closed in, the Red Bull junior lapping some 0.5s faster than the race leader.

With five laps remaining, the Estonian’s charge stalled out at 1.5s back from the battling pair ahead.

On Lap 38, Williams was shuffled back when Daruvala got by out of the Nouvelle Chicane to steal eighth.

The move started on entry into the chicane, Williams running off the track before appearing to cede the position, Sargeant capitalising as the Australian dropped two places as a result.

In the final laps, Pourchaire’s challenge for the lead fell way, Drugovich re-establishing a small advantage – there was a late scare with a moment into La Rascasse on the penultimate lap, but he has far enough clear to get away with the error.

Drugovich then held on to win by 0.8s from Pourchaire with Vips third and Doohan holding on to fourth.

Armstrong was the leading Kiwi home in sixth, Lawson limping into a late retirement.

Williams’ race also ended in disappointed when Iwasa sent it up the inside at the hairpin on the final lap, both skating into the fence as they tumbled to the rear of the field.