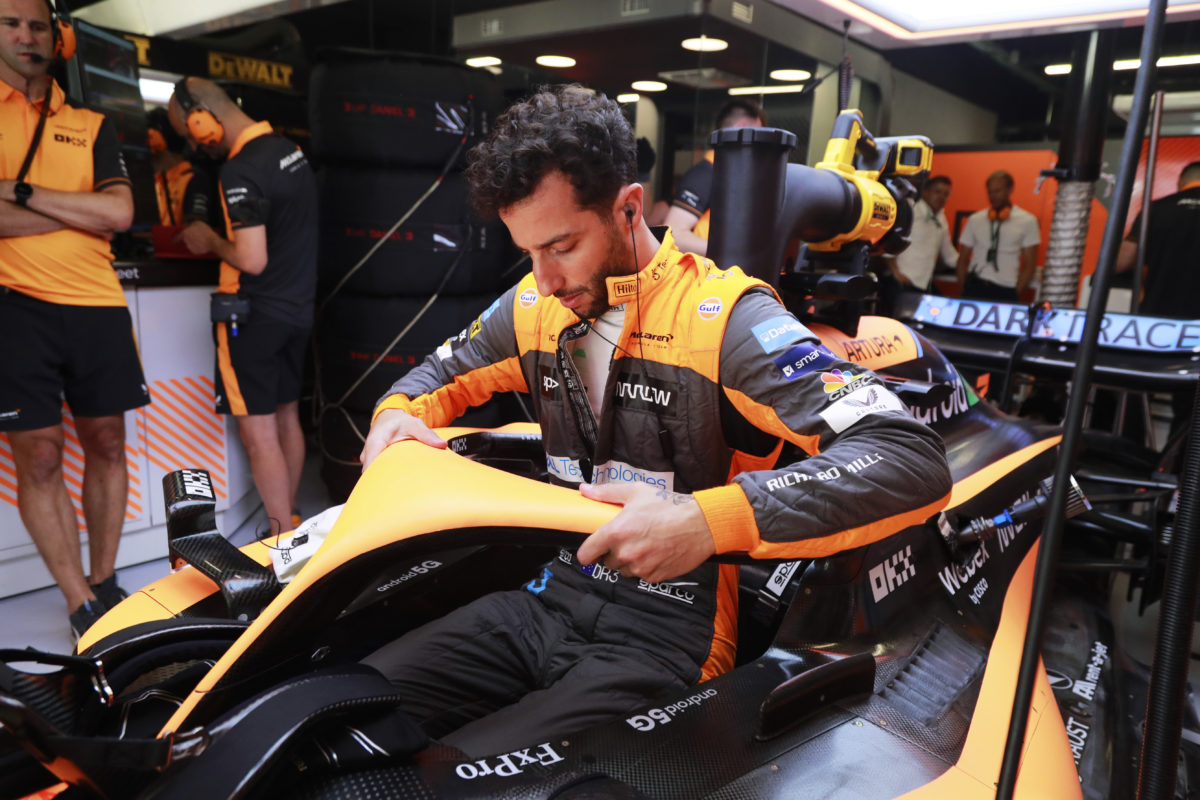 Crashing out of Free Practice 2 in Monaco is about the last thing Daniel Ricciardo needed as criticisms surrounding his performance in the 2022 Formula 1 season increase.

Speaking to the press on Friday in Monaco, the Australian confirmed that he has a contract in place with McLaren until the end of next season.

His comments come after an opening six races in which he has been largely overshadowed by team-mate Lando Norris, continuing a trend set in 2021 when he joined McLaren.

While there have been bright flashes, such as his victory at the Italian Grand Prix last year, his efforts have been such that CEO of the team, Zak Brown, this week expressed his disappointment.

“Obviously we would like to see Daniel much closer to Lando and have a good intra-team battle, Daniel’s just not comfortable yet with the car.

“We are trying everything we can – again it was a disappointing weekend.

“Short of Monza [last year] and a few races, it’s generally not met his or our expectations.”

Brown’s voice is just one of a growing chorus filled with concern, with the media beginning to also turn on the 32-year-old.

To his credit, Ricciardo has not shied away from the negative headlines, and in Monaco yesterday tackled them head on.

“It’s not false. It’s pretty true,” he confessed when asked for his reaction to Brown’s comments.

“It’s something that, well firstly, the comments, I don’t take it personally. My skin is tanned, beautiful, and also thick.

“But yeah, it hasn’t [lived up to expectations]. No one’s going to be harder on me than myself, and I know that I don’t want to be racing around 10th, 12th place.

“It’s been a little bit more, certainly testing at times in terms of, obviously trying to get up and maximise myself in this car.

“We’re working together hard at it. And the team wants it, I want it, we’re just working through it.”

It’s hard to shy away from the facts, and thus far in 2022 Ricciardo has been found wanting in comparison to Norris.

In the drivers’ championship, the Australian has just 11 points versus 39 on the other side of the garage.

There have been issues that do at least partially explained that lopsided tally, with Ricciardo picking up damage following a clumsy exchange early in the Emilia Romagna Grand Prix which saw him finish last.

In Bahrain, the hangover from contracting COVID, and the team’s broader struggles, meant he finished outside of the points.

Last weekend, Ricciardo revealed the team identified an issue with his MCL36 after the race when asked about the fall out of the Spanish GP by Speedcafe.com.

It’s left precious few ‘clean’ weekends, with the exception perhaps of the Australian Grand Prix, where he effectively shadowed Norris to the chequered flag for his sole points finish of the year.

It’s a fairly bleak picture, and it’s therefore unsurprising that, in a team with the grand ambitions of McLaren, the pressure has been ratcheted up.

After all, he was hired to lead the team and drive it back to the front of the grid and currently he is not meeting that expectation, as  elucidated by Brown.

Ricciardo has a contract until the end of next season, a point he had to clarify after making some confusing statements earlier in the year regarding his current deal.

There is an option to extend that if both parties wish to do so, though it’s far too early to begin having those conversations.

At the conclusion of 2023, the West Aussie will be 34, around the age many drivers look to call time on their F1 careers – unless your name is Kimi Raikkonen or Fernando Alonso.

It is therefore natural that potential replacements are being suggested, with Colton Herta the name most readily linked to the seat.

Some have suggested that could come as soon as next season, though at this stage that’s presumptuous, not least because of the current contract situation.

Of course, that can be dealt with simply enough, but Herta is an unknown prospect.

He’s yet to drive a Formula 1 car, and while his nationality and success in IndyCar make him a prime candidate, there are no guarantees of success.

Taking the plunge would be a significant risk at a time when Ricciardo is still a known quantity and is capable of delivering to a level.

There is no doubt that Ricciardo is at something of a low ebb, emphasised by his crash in Free Practice 2 in Monaco overnight.

His tribulations to date in 2022 have not been all of his own creation, though some have.

He’s being criticised by his team – his engineer asked first if his car was alright after his practice shunt yesterday before enquiring about the driver almost as an after thought – and is copping the full heat of the world’s media.

It’s an uncomfortable place to be, especially at a time when he needs a clean weekend to rebuild his confidence.

Ricciardo hasn’t run out of talent, but he is running out of time to prove it.