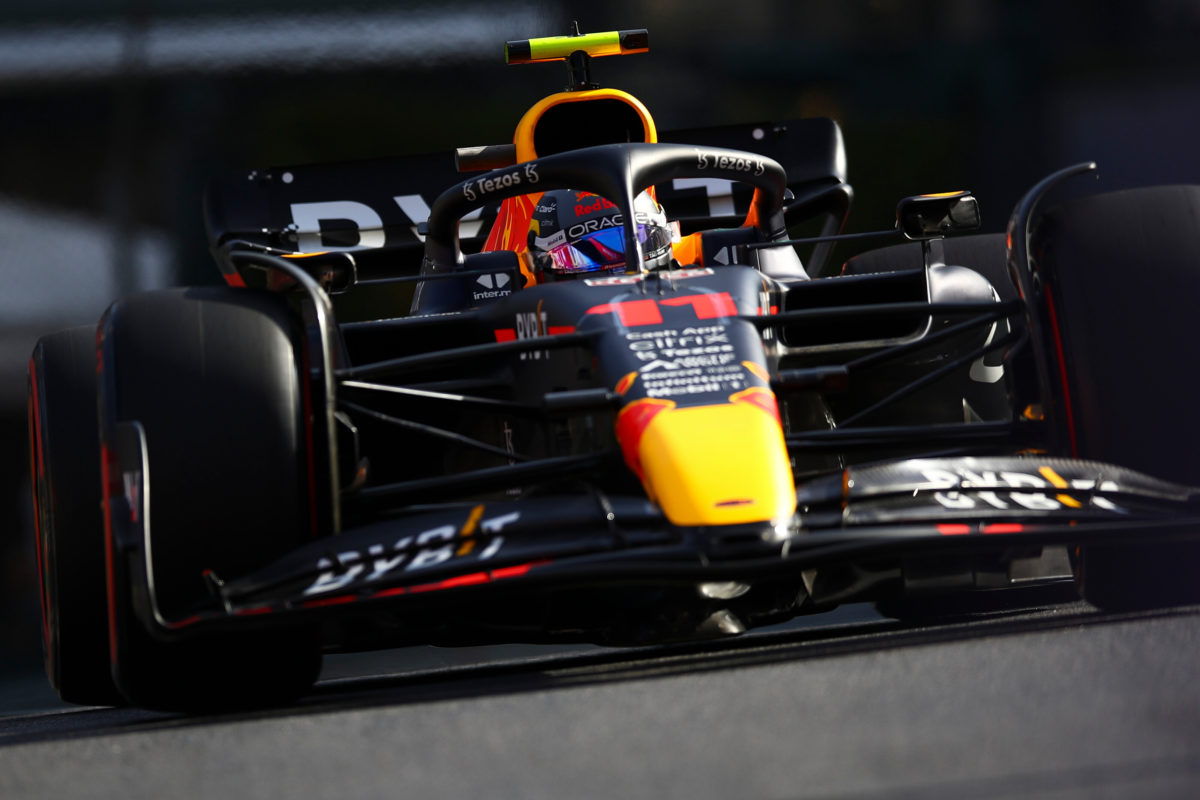 Sergio Perez has emerged fastest after a near session-long battle with Charles Leclerc in the final practice session at the Formula 1 Monaco Grand Prix.

The duo swapped fastest laps through much of the 60-minute outing, Perez ultimately gaining the upper hand by 0.041s.

Carlos Sainz was third best from Max Verstappen as the chequered flag fell, Red Bull and Ferrari again the class of the field.

Daniel Ricciardo ventured out after five minutes of the session starting, the Australian having missed much of Free Practice 2 when he crashed at the Swimming Pool.

The Australian recorded a 1:16.232s on a set of soft tyres to open his account.

Both Ferraris headed out just prior to the 10-minute mark, the pair also on a set of the soft compound rubber.

No sooner did the Dutchman join the track did Sainz go fastest with a 1:14.114s, only for team-mate Leclerc to go 0.106s faster.

Verstappen’s initial effort was 0.4s off the pace, a 1:14.455s leaving him third best, one spot up from team-mate Perez.

The world championship leader improved to 1:13.685, leaving him just 0.038s away from Leclerc, only for the Ferrari driver to improve and edge out to 0.246s clear.

It became something of a battle between the blue and red teams, Perez going fastest over Verstappen by 0.125s with a 1:13.297s.

Leclerc then matched that time exactly to go, officially, second fastest, while Sainz was within 0.2s in fourth.

With 31 minutes remaining, the benchmark time fell to 1:12.885s courtesy of Leclerc.

Ricciardo was the busiest driver in the first half of the session, the Australian logging 16 laps to sit 12th fastest with a 1:14.689s.

Team-mate Lando Norris meanwhile improved to third best with a lap just prior to the 40-minute marker, a 1:13.226s leaving him 0.341s off Leclerc’s best set some 10 minutes earlier.

Pierre Gasly also improved as he shot up above Norris, using a fresh set of tyres on his Scuderia AlphaTauri.

Sainz improved to go fastest when he completed another performance run with 11 minutes remaining, a 1:12.846s to result.

As he did so, Lance Stroll brushed the wall exiting the Swimming Pool, damaging the front wing as he returned to the pits, though drawing nothing more than a brief local yellow flag.

Verstappen and Perez both improved their times late in the session, the former rising to second on a 1:12.881s before his team-mate went fastest with a 1:12.777s.

Like earlier in the session, it was punch and counter punch as Leclerc reacted to go fastest with a 1:12.702s, 0.075s up on his Mexican rival.

They then swapped positions again when the Red Bull driver logged a 1:12.554s to return to the top of the timesheets.

Their battle was not over as Leclerc improved to move 0.037s clear, only to be swiftly demoted by Perez who went fastest by 0.041s.

At the end of the session, Ricciardo kept himself out of trouble throughout to log 28 important laps after his Friday crash.

Even still, he was 0.9s slower than team-mate Norris, who was sixth fastest, one spot back from Gasly.

Rounding out the to 10 were Lewis Hamilton, Kevin Magnussen, George Russell, and Fernando Alonso.

Qualifying is next in Monaco, commencing at midnight AEST.