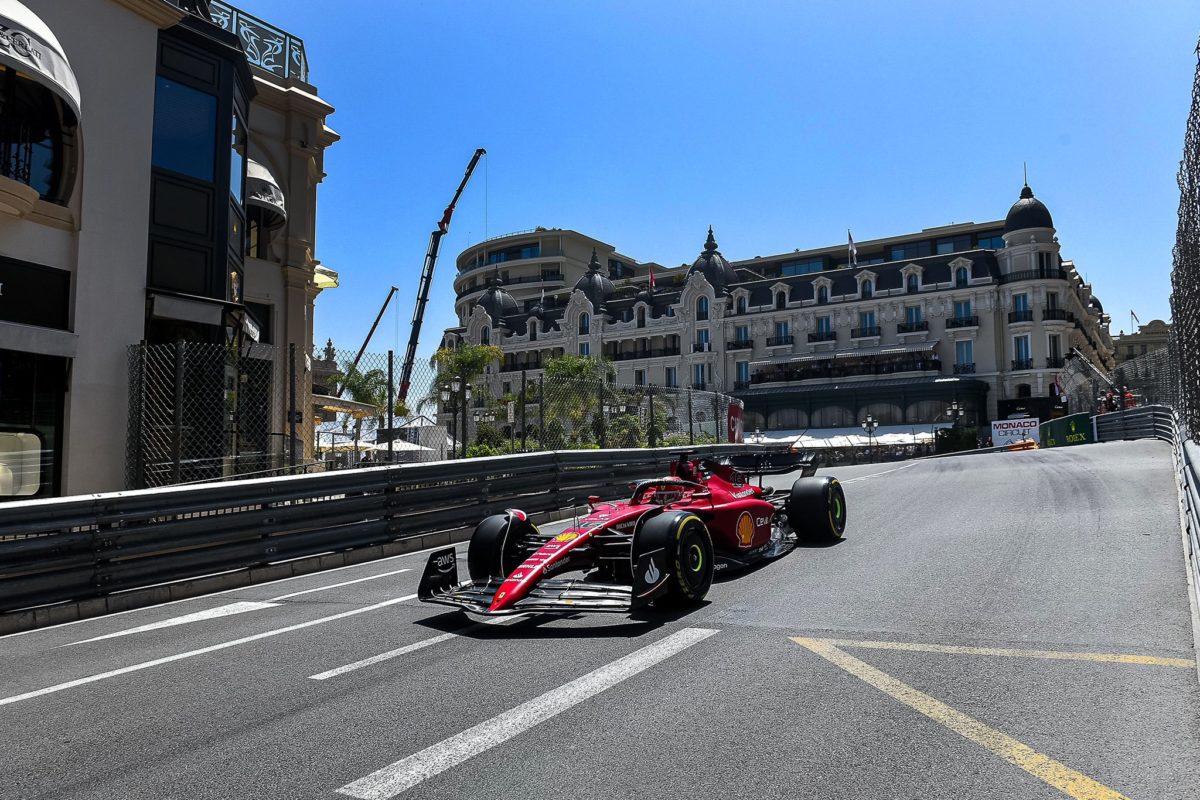 Less than a tenth of a second split the top three, with Sergio Perez second and Carlos Sainz third.

Conditions were hot, air temperatures of nearly 30 degrees while the track approached the mid-50s.

The tyre allocation for the weekend is the softest in Pirelli’s range, two steps softer than were used in Spain a week ago.

The hard compound tyre was the preferred rubber as the session began, only the two Ferraris of Sainz and Leclerc heading out on mediums.

Early feedback from drivers centred on ride quality, the cars stiffer this year than they have been previously.

That translated into a more difficult time of it for the drivers as they chased improved handling.

Latifi’s entry into the session was delayed with a radio issue, while at Alfa Romeo Sauber a gearbox issue hindered Valtteri Bottas’ running.

Times tumbled quickly, starting in the 1:20 bracket and dropping to 1:15.8s by Leclerc after just 10 minutes.

Sainz in the sister Ferrari set a near identical time, just 0.001s slower than his team-mate, while Verstappen was only 0.05s back after 15 minutes.

Leclerc headed up the escape road at Ste Devout, abording the corner early before affecting a flick spin and heading up Beau Rivage.

A gearbox issue for Mick Schumacher halted the session as he stopped at pit entry, blocking access to the lane.

Both Mercedes drivers were struggling with the handling of their car, specifically the way the can navigated the bumps.

That saw dampers being changed on Hamilton’s car under the red flag, though it scarcely improved things for the Englishman.

There were less issues at McLaren, Norris swapping from hards to soft compound tyres to go fastest with a 1:15.301s.

He then improved that to a 1:15.056s, Ricciardo recording a time just 0.185s slower than his McLaren team-mate as the pair sat atop the timesheets.

Russell, for instance, was strong through the first third of the lap but dropping time through the remaining two sectors.

Whether that was a case of risk management, car performance, or tyre condition is unclear.

Verstappen adopted a higher risk approach than many others, improving to a 1:14.712s.

Soon after, he repeated Leclerc’s mistake from earlier in the session, heading up the escape road at Ste Devout.

The Red Bull driver heavily locked his front-right wheel on approach to the right hander, the Dutchman circling back to the pits once he’d recovered in need of a fresh set of boots.

It proved a hot spot of action with Kevin Magnussen and Perez also drawing the yellow flags as they recovered from the similar incidents.

Verstappen ended up fourth fastest from Norris, while Ricciardo was seventh behind Gasly.

Running in Monaco continues with Free Practice 2 at 01:00 AEST.