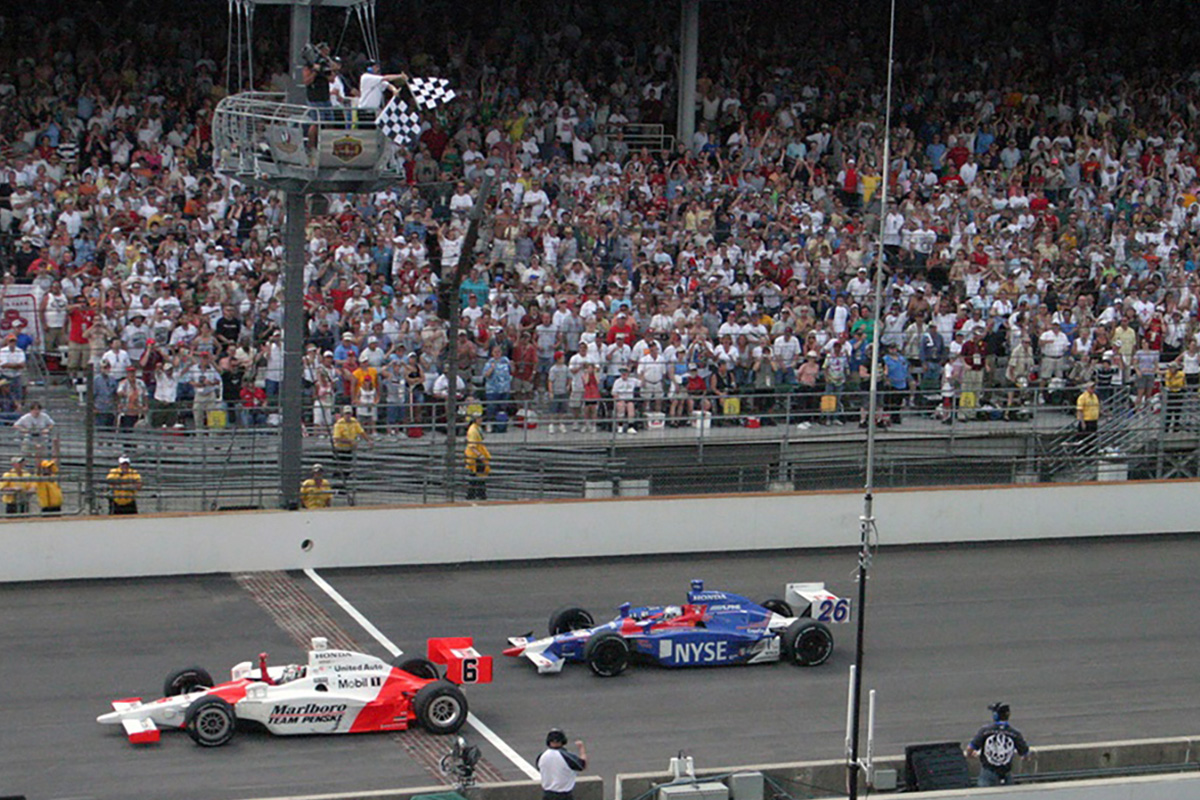 The heartbreaking finish of the 2006 Indy 500. Picture: Indianapolis Speedway website

The 2006 Indianapolis 500 was the 90th running of the event, and is known for having one of the closest and most exciting finishes in history, when Sam Hornish Jnr passed Marco Andretti in the dying stages to claim his first and only Indy 500 victory.

Three-time IndyCar champion Hornish Jnr started from pole for the race with an average speed of 228.9mph, alongside Helio Castroneves and the late Dan Wheldon.

Race day was one of the hottest days on Indy 500 record, with temperatures topping 32 degrees Celsius at Indianapolis Motor Speedway.

As the green flag dropped, Hornish Jnr, Castroneves and Wheldon all fought hard for the lead on the first lap, but it was Castroneves who led the opening lap.

On Lap 2, the caution was brought out after a heavy crash between Hemelgarn Racing team-mates Jeff Bucknum and P.J. Chesson.

Once racing resumed, Wheldon dominated the next part of the race, with the yellow flag then flying again on Lap 67 after Tomas Scheckter crashed.

The South African spun off of Turn 4, and slammed into the pit wall, with some of the flying debris going into the crowd, mildly injuring five spectators.

All spectators, as well as Scheckter, were okay after the crash, and the race resumed with Wheldon still in front.

On Lap 111, Castroneves and Buddy Rice made contact at Turn 4, which sent both into the wall heavily.

This accident was the first time since 1992 that two previous Indy 500 winners were both taken out in an accident, and it also marked the first time in Castroneves’ career that he failed to finish an Indy 500 race.

Much like 2005, Danica Patrick was having one of her best days in her IndyCar career, past the halfway point, the Rahal Letterman Racing driver was sitting inside the top six, ready to pounce on the leaders, but she eventually finished in eighth.

Pole-sitter Hornish Jnr had trouble in the pits on Lap 150, when he pulled out of his bay with the fuel hose still attached to the car.

After the field went back to green flag conditions, Hornish Jnr was required to serve a drive-through penalty, and he returned back onto the track more than 30 seconds behind the leader.

Team owner Roger Penske had claimed responsibility for the mistake being a miscommunication to the driver, even though the same thing happened to Jeff Simmons (Rahal Letterman Racing) one lap prior, but Simmons carried his fuel nozzle all the way to Turn 3 before it detached itself from the car.

Simmons then crashed two laps later and retired from the race.

With Kanaan leading, and ready to fight off anyone who challenged him, a late-race caution came out after Felipe Giaffone crashed and caused drama in the pits, with some lead drivers coming in and others staying out.

Hornish Jnr was now up to fourth on the restart, with the two Andrettis, Michael and his son Marco holding the top two positions.

Marco eventually passed his father with just three laps remaining, and Hornish Jnr went with him.

With one lap remaining, Marco Andretti had pulled out a one-second lead on Hornish Jnr, but the three-time champion wasn’t going to give up without a fight.

Hornish Jnr sat in the draft for the entirety of the final lap, and pulled out to make the pass for the win when they got onto the front stretch.

Amazingly, Hornish Jnr’s move paid off, beating Andretti to the line by just 0.0635 seconds, to complete the second-closest finish in Indy 500 history.

This was also the first time in history where a driver had made a last-lap pass for the win.

Hornish Jnr went on to win the championship later that year.

Marco Andretti’s peers, Hornish Jnr and his father Michael Andretti both said that Marco should be incredibly proud of himself, for a rookie to drive that well in his first Indy 500.

A lot of the field, as well as the crowd were heartbroken for Marco Andretti, who still remains without an Indy 500 win.

He will be competing in the 2022 event this coming weekend, starting in 23rd.

But the 2006 Indy 500 will forever be known as ‘the one that got away’, and the heartbreaker for Marco Andretti.