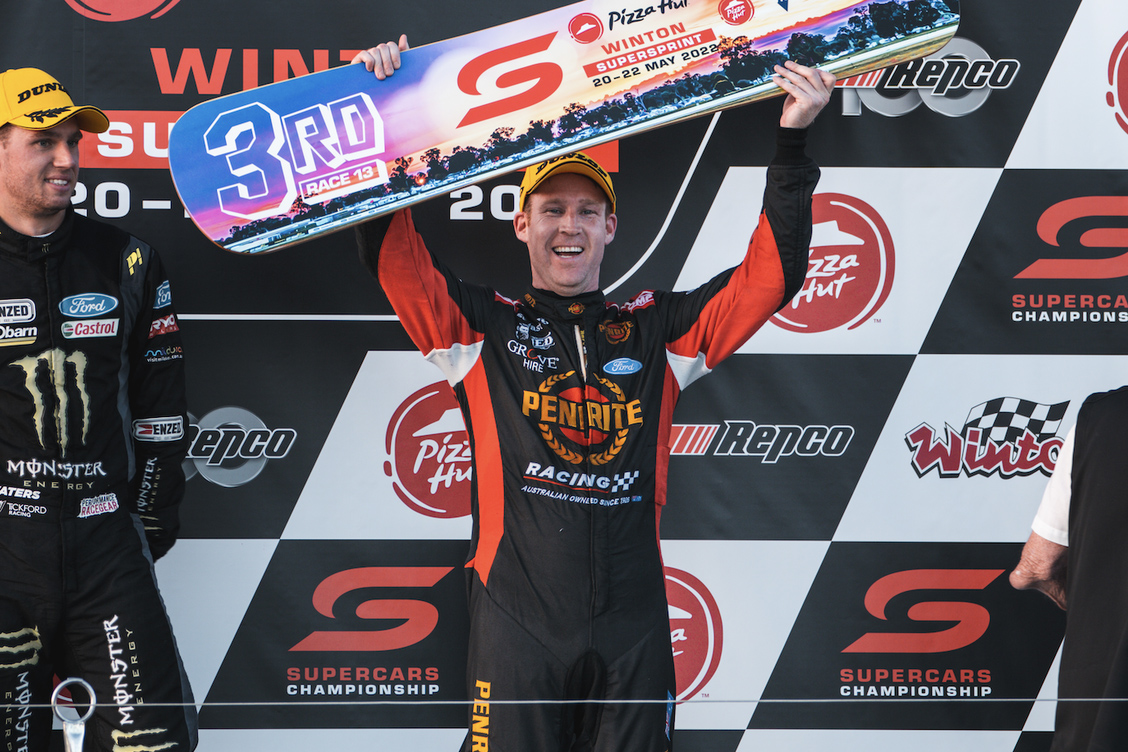 Although Grove Racing went winless at the Winton SuperSprint, the ascendant Supercars team did achieve a significant milestone.

By the end of the two-day event, Penrite-backed pair David Reynolds and Lee Holdsworth had accumulated the most points for any team in the pit lane.

In all, the Braeside squad racked up 479 points; two podium finishes for Reynolds and a string of top six finishes for Holdsworth putting them at the top of the pile.

Coming into the weekend, Erebus Motorsport held down fourth in the teams’ championship but now Grove Racing has turned a two-point deficit into a 158-point advantage to leapfrog them.

“For Penrite Racing, to score the most points out of any team is a real achievement for us,” team principal David Cauchi told Speedcafe.com.

“I’m really happy for Lee to see him back up there, well in the top 10 where he belongs. We knew that test was going to be really important for us as a group to really understand these cars.

“We’ve been changing and trying a lot of things and we haven’t really had the time to understand them properly. That test day really gave us that opportunity and also time for Lee to understand our car as well being new to the team.

“It was really awesome to see it all come together this weekend and see the guys consistently up there. Still, lots to improve, as always. Qualifying, still, we didn’t quite hit the nail on the head this weekend and I think if we had qualified better we certainly had the pace to win a race this weekend.

“That’s disappointing that we didn’t get that done, but there are so many positives out of the weekend for everybody.”

That disappointment stemmed from Reynolds’ front-running one-lap pace early in the weekend.

The 2017 Bathurst 1000 winner was second fastest in each of Saturday morning’s two practice sessions.

Reynolds looked likely to contend for pole position having gone second fastest in Q1 and then fastest in Q2. However, come Q3, he couldn’t claim his 13th career pole and instead was seventh.

“I genuinely believe this weekend if we had qualified a little bit better we had the pace to win a race, without question,” said Cauchi.

“It’ll come. We’re not putting any unnecessary pressure on ourselves to get that, but absolutely, it will come.”

As for what the team needs to do to take the next step? Cauchi said little improvements here and there as the team continues to develop its Ford Mustangs will make the difference.

“It’s just a lot of small things in a lot of areas,” said Cauchi.

“That’s why it’s not easy, finding those last little bits is really difficult and time-consuming. We’re just working on a few things every weekend.

“The pace that we have improved has been really impressive and it just goes to show how hard everyone here is working and the dedication of the entire team is phenomenal.

“It’s a great environment at the moment to be in and it’s a very exciting future.”

Reynolds has climbed from seventh to fifth in the drivers’ championship from Perth to Winton while Holdsworth has risen from 15th to 11th.