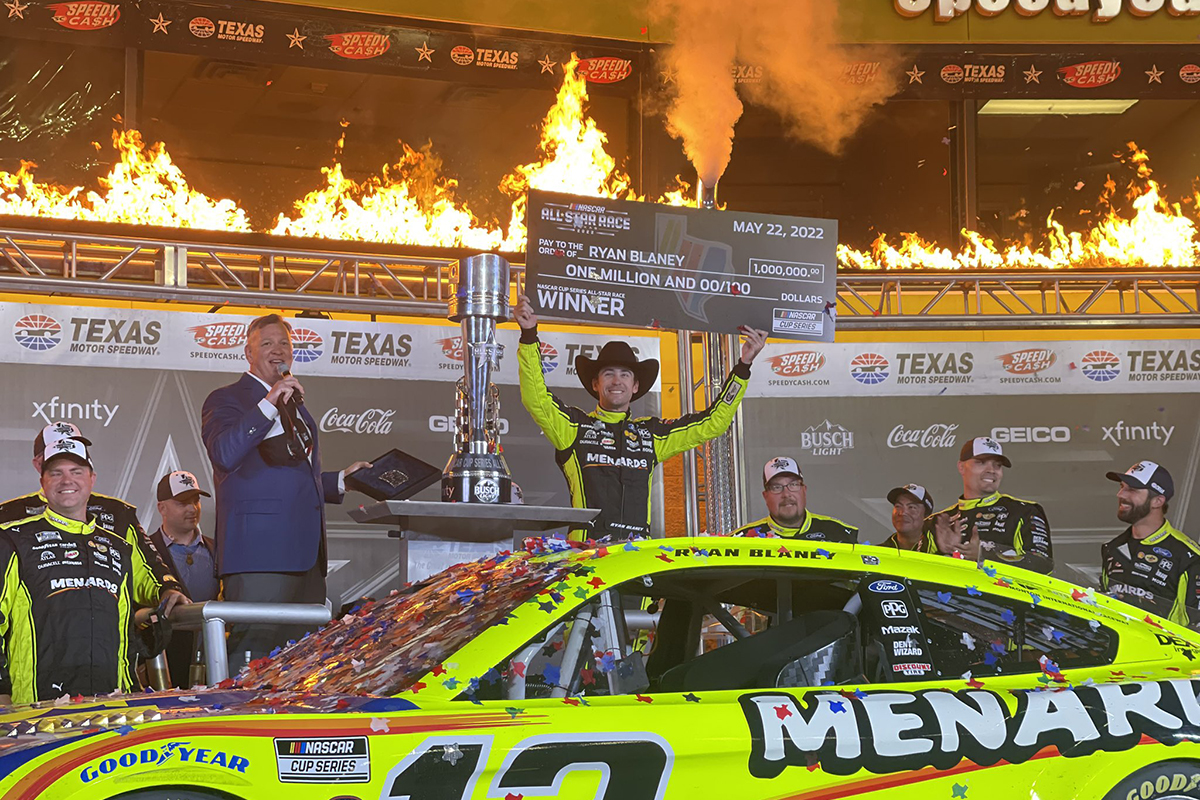 The 2022 NASCAR All Star Race ended in controversial fashion, when the caution came out just seconds before eventual winner Ryan Blaney finished the race, causing a late restart.

Traditionally, once the leader crosses the line to start the final lap, the next flag – whether that be chequered or yellow – ends the race. However, in the case of the All Star Race, a new rule for 2022 meant that if the yellow flag flew on the final lap then the pace car would head out and the race would be restarted.

On the final lap, All Star Open winner Ricky Stenhouse Jnr struck trouble on the back straight, causing a caution.

Blaney was just metres away from the finish line, and with him and his crew thinking victory was theirs, Blaney put down the window net in celebration, but quickly found out that the race wasn’t in fact finished.

NASCAR commentator Mike Joy expressed his disbelief at the situation, when as soon as the caution came out, he exclaimed “really?”

Joy explained that the crashed car on the back straightaway had cleared the track, so it was safe to finish the race.

Senior vice-president of competition Scott Miller later admitted a mistake had been made.

“Yeah obviously everybody knows that we probably prematurely called that yellow flag,” Miller said after the race.

“The way that works in the tower is that we’re all watching around the race track and the race director makes the call and has the final saying of when the yellow comes out.

“We all watch and we saw the car against the wall on the back straightaway and the race director looked up and I’m not sure what he saw, but he immediately put it [the yellow flag] out.

Even more controversy surrounded the finish with regards to Blaney putting his window net down.

According to NASCAR’s rules, that goes against the safety regulations, and he should have had to come down pit road to fix it, or receive a black flag.

“Obviously Ryan Blaney thought he won the race, which is another by-product in the special rules of the All Star Race, because every other race that we do besides this one he would have won the race,” Miller said.

All Star runner-up Denny Hamlin said Blaney should have been forced to come down pit road, but also noted he would have done the same thing.

Post-race, Blaney explained that he wasn’t aware the race was still on, and fixed the window net as soon as he could.

Many retired NASCAR greats such as Mark Martin and Dale Earnhardt Jnr took to Twitter, relieved that Blaney won the race after the late restart.

Blaney passed the post-race inspection and went on to officially be the winner of the race and collect the $1 million prize.