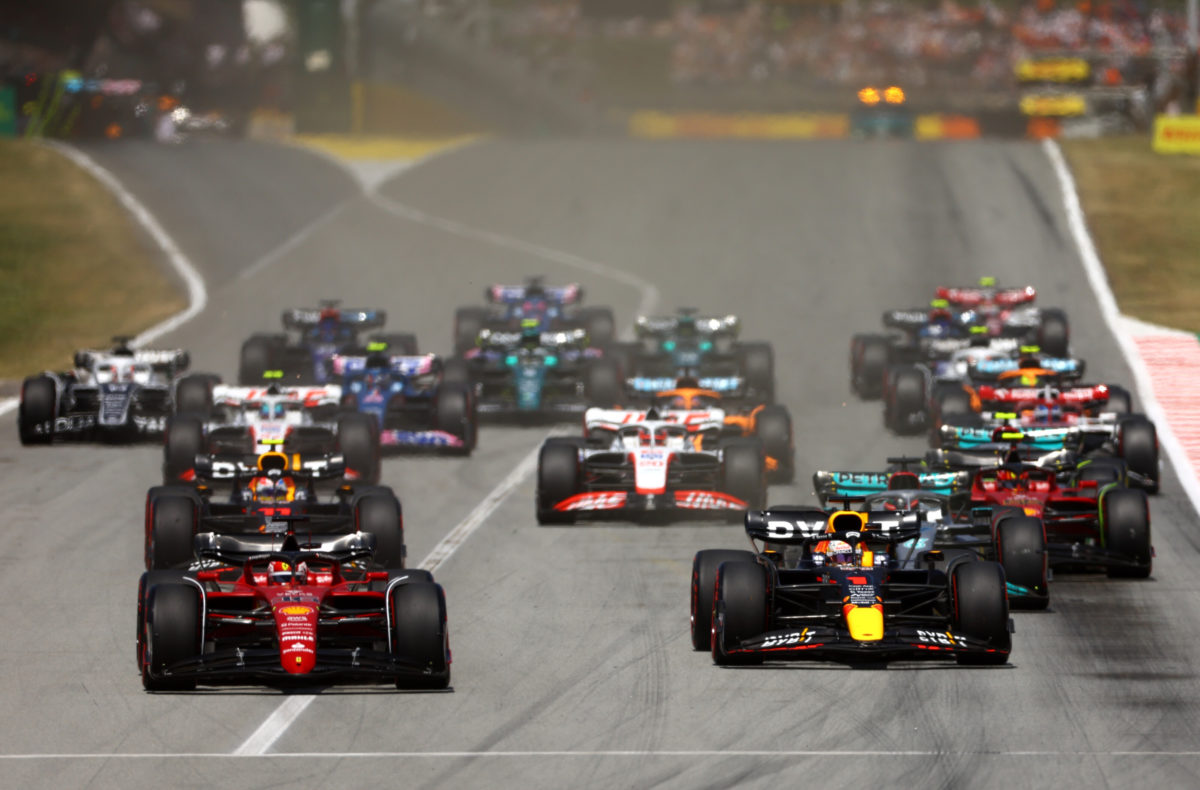 The Dutchman emerged victorious in the race after a battle with George Russell, the Mercedes driver rounding out the podium.

It’s a race that Perez could have won, only for the Mexican to move aside for Verstappen, capitalizing on the power unit issue that forced Leclerc out of an encounter he looked set to win.

It was an even start from the front row, Leclerc holding the lead from Verstappen into Turn 1, with Russell third and Sergio Perez fourth as Sainz slipped to fifth.

Lewis Hamilton and Kevin Magnussen battled into Turn 4, the pair making contact leaving the Haas to bounce through the gravel and Mercedes to limp back with a left-front puncture.

At the head of the race, Leclerc held a 0.9s advantage over Verstappen out front, while Russell has slipped 2.4s away from the lead Ferrari.

Mick Schumacher found his way up to sixth on the opening lap, though fell back to seventh as Valtteri Bottas made a move into Turn 1 as they began Lap 3.

The German lost a further spot to Esteban Ocon three laps later, the Alpine using DRS to ease through as he had on Daniel Ricciardo a lap earlier.

On Lap 7, Carlos Sainz found himself off the road at Turn 4, rejoining out of the points after he dropped the rear end of his Ferrari turning into the right-hander.

Two laps later, Verstappen made the same mistake and found the same gravel trap as his Spanish rival, the team advising there was a large wind gust as he turned in.

That promoted Russell to second, the Mercedes busy defending from Perez who had the advantage of DRS.

It quickly became a three-way scrap as Verstappen joined the fight as he recovered.

Russell was clearly holding up the two Red Bulls as a battle that would become one of the highlights of the race commenced.

Leclerc was left with a comfortable 10s advantage after 11 laps.

With Perez unable to make inroads on Russell, Verstappen was waved through to attack the Brit.

On Lap 14, Russell and Verstappen both stopped, swapping on to the medium tyres as they resumed in third and fourth, Perez having stayed out to claim second.

Verstappen was nursing an intermittent DRS issue, the flap opening on some occasions and not others.

It left the Dutchman stuck behind Russell, unable to make a move despite clearly enjoying more pace.

Perez stopped from second on Lap 18, moving onto the medium tyres as he emerged some distance back from Verstappen in a net fourth.

Russell was mounting a solid defence, moving late on the front straight to cover off the threat posed by Verstappen, when his DRS worked.

Leclerc stopped from the lead after 21 laps, Ferrari turning him around with a set of medium tyres in 2.2s.

He rejoined still in the race lead, his advantage out front 5.3s over Russell.

The battle for second heated up when, on Lap 24, Verstappen made a move up the inside into Turn 1, though Russell was somehow able to hold on.

They ran side-by-side through the complex that followed, the Red Bull driver forced wide, his attack thoroughly, and cleanly, rebuffed.

While they battled, Perez cruised up to the back of the duo though the team was unwilling to wave him by Verstappen.

On Lap 27, drama struck the race leader as Leclerc began limping, the Ferrari suffering a sudden loss of power.

He was forced into the pits and retirement, promoting the Russell/Verstappen battle a fight for the lead.

Red Bull pitted the Dutchman for a second time on Lap 29 as they looked to undercut the Mercedes.

He had a set of soft tyres fitted and rejoined fourth behind Bottas, 18.6s away from the lead of the race as Russell found his mirrors filled by Perez.

The Red Bull driver claimed the lead on Lap 31, using DRS to sweep in front of the Mercedes as they turned into Turn 1.

Such was Verstappen’s pace, he despatched Bottas around the outside at Turn 12 to reclaim third place on the road.

A lap short of half-distance, Sainz stopped for a second time, emerging with a set of medium tyres in eighth.

Having passed Russell, Perez had opened up a 2.5s advantage out front, while Verstappen closed back in on the Mercedes at a rate of more than two seconds a lap.

The former race leader pitted on Lap 37, just as Verstappen latched on to the rear wing of the F1 W13 once again.

It left the two Red Bulls first and second, Perez with a 6.2s clear out front until he stopped at the end of the following lap.

On the soft tyres, Verstappen had a pace advantage but the need to stop again, while Russell could run to the end on the mediums.

After 41 laps, there were 22.5s between the two in first and third respectively, just under what was needed for a pit stop.

Verstappen pitted for a final time on Lap 44, a 2.4s stop feeding him back out ahead of Russell in a net second place to team-mate Perez.

The Red Bull driver moved back into the race lead on Lap 49, his path being eased by his team-mate who moved aside.

It was the result of a radio message from the pit wall, instructing Perez that he was on a different strategy, and not to make life difficult.

“Thanks mate,” came the message from Verstappen over the radio shortly after making the move as he pulled away out front.

Russell fell into a lonely third, well clear of Bottas in fourth but without the pace to live with the Red Bull duo ahead.

Hamilton swapped places with Ocon as they began Lap 52, Russell stopping from third at the end of the lap.

He took on a set of soft compound rubber, rejoining fourth, 3.8s down on Bottas ahead – a gap that was quickly bridged as the Mercedes driver regained third.

In the final dozen or so laps, a number of runners pitted as they chased a shot at the bonus point for fastest lap; Hamilton, Russell, and Perez among their number.

The Red Bull driver duly set fastest lap on Lap 55, stealing the bonus point from Hamilton, who held it to that point.

Bottas found himself losing two places in three corners as Sainz passed him into Turn 1 on Lap 59, Hamilton then driving around the outside at Turn 3.

Next time by, the Mercedes driver climbed to fourth as he used DRS to pass Sainz into Turn 1.

The Ferrari driver defended the inside, leaving the racing line for Hamilton to use, braking late and sweeping through to the apex ahead.

However, a late radio call to both Mercedes drivers advised them to increase the lift and coast, stating it was a “DNF risk.”

Hamilton was defenceless when Sainz closed back in, easing by on the front straight as they began the penultimate lap.

Verstappen held on out front to win by 13s from Perez, a one-two for Red Bull, with Russell rounding out the podium.

Sainz clinched fourth after his early off, then Hamilton, Bottas, Ocon, Norris, Alonso, and Tsunoda.

Verstappen has now moved into the lead of the drivers’ championship for the first time this season.

Formula 1 continues next weekend with the Monaco Grand Prix, track action set to get underway on Friday.