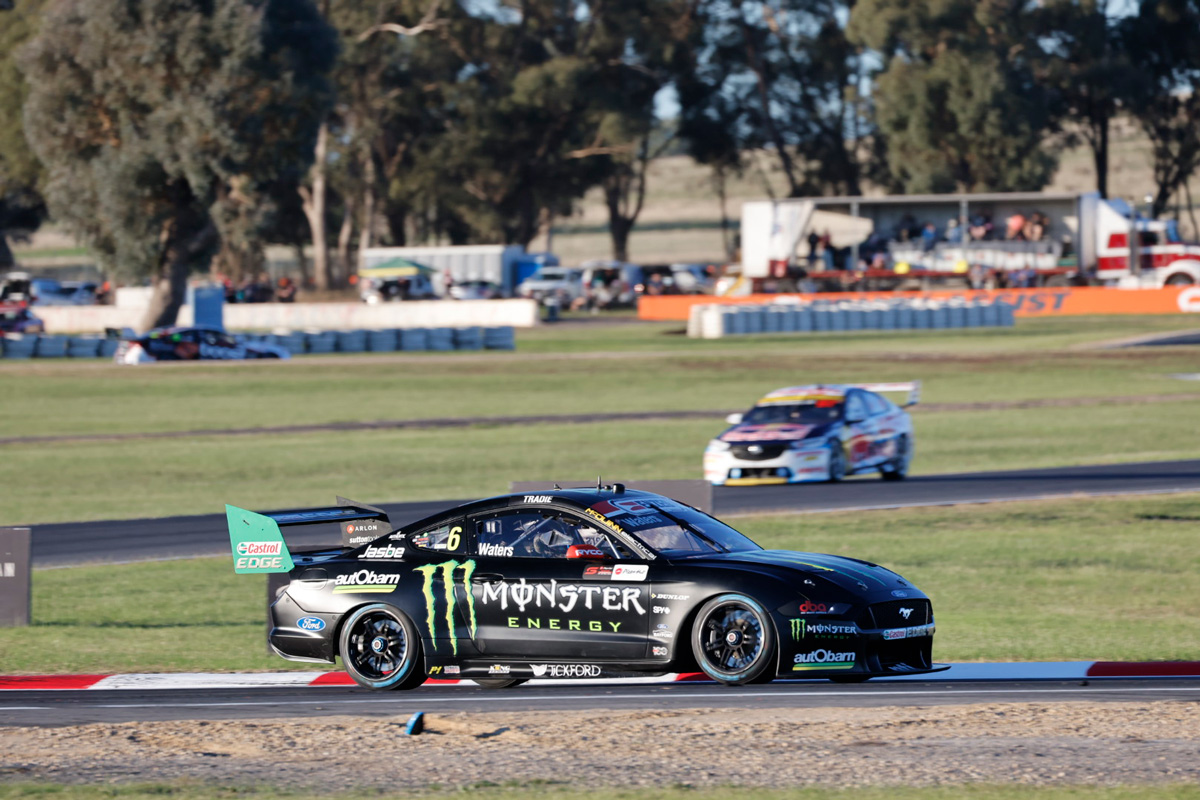 Cameron Waters has done just enough to beat a charging Shane van Gisbergen to victory in Race 15 of the Repco Supercars Championship at the Pizza Hut Winton SuperSprint.

The Tickford Racing driver effectively led all the way but had the #97 ZB Commodore in his mirrors for the last of 36 laps, after van Gisbergen was fitted with three fresh tyres in his compulsory pit stop.

However, unlike the clash which Waters survived a day earlier, a lunge never came this time around, and the #6 Monster Energy Mustang beat the Red Bull Ampol Racing entry to the chequered flag by 0.4422s.

Andre Heimgartner had provided some resistance to van Gisbergen, getting ahead at the start and also in their pit stops, but eventually finished more than 10 seconds back in third position in the #8 R&J Batteries ZB Commodore.

With Anton De Pasquale (#11 Shell V-Power Mustang) classified eighth, and van Gisbergen picking up the five fastest lap bonus points, the Triple Eight Race Engineering driver has moved his advantage at the top of the championship to 281 points, while Waters is up to third.

Back when the lights went out, Waters led the field away from pole position while van Gisbergen lost second spot to Heimgartner after the Brad Jones Racing driver managed to hang on the outside through the first corner.

Van Gisbergen was in fact almost back to fourth by the time they exited Turn 3, but just managed to cover a fast-starting Reynolds, while De Pasquale took up fifth.

As was the case in the preceding race, van Gisbergen had a train form behind him in the opening laps, but shook them off and then set about closing the one-second margin between himself and Heimgartner ahead.

The championship leader caught Car #8 on Lap 14 and made a fairly straightforward pass at Turn 7, by which time Waters was more than three seconds up the road.

While Brown pitted from sixth on Lap 13, the rest of the front-runners were pressing on, and van Gisbergen had cut Waters’ advantage to less than two seconds on Lap 17.

Car #6 was into the lane next time around for a set of rears, while van Gisbergen and Heimgartner waited until Lap 22 to stop.

Triple Eight opted for three tyres for Car #97 and van Gisbergen was jumped in the lane by Heimgartner, as they resumed again behind Waters.

The championship leader reclaimed the effective second position from Heimgartner next time they negotiated Turn 10, as Reynolds pitted from the official lead for new working side tyres.

When the pit stop cycle completed on Lap 24, Waters led by 5.8s over van Gisbergen, with Heimgartner third and Reynolds fourth, the latter having briefly dropped behind Brown on his out lap.

Van Gisbergen cut Waters’ lead to less than four seconds on Lap 29, and was only 1.6s in arrears with three laps to go.

At the start of the final lap, the figure was just 0.53s, but SVG never quite got close enough to try and have a dive as he had done around 24 hours earlier, when Waters also prevailed.

It means that those two finished top two in all three races at Winton, with honours split two-one in Waters’ favour.

“So pumped to get it done again; two wins this weekend is absolutely amazing,” he said.

“I can’t thank all my team enough; they’ve given me an absolute rocketship this weekend and it’s awesome to be able to convert it as well.

“I knew Shane took three tyres and he was going to come back at me, he was faster that first stint, but I just tried to press on and maintain as much of a gap as I could and I held on.”

Behind Heimgartner, Reynolds, and Brown in the classification was Holdsworth in sixth, from Feeney, De Pasquale, Winterbottom, and Will Davison (#17 Shell V-Power Mustang).

Chaz Mostert (#25 Mobil 1 Optus ZB Commodore) finished 11th, having qualified 10th, pitted on Lap 6, but then got stuck behind Davison due to a slow stop.

Brodie Kostecki was officially classified 13th, and Jack Smith (#4 SCT Logistics ZB Commodore) finished a lap down in 26th after copping damage, front and rear, in the cut and thrust of the first lap.

James Courtney (#5 Snowy River Caravans Mustang) ended up 27th of 27 after his eventful 31 laps, copping a 15-second penalty for spinning Tickford team-mate Jake Kostecki (#56 Tradie Mustang) then tangling with Tim Slade (#3 CoolDrive Mustang) in an incident which put him into the barriers at Turn 2.

The sixth event of the season is the Merlin Darwin Triple Crown, at Hidden Valley Raceway, on June 17-19.