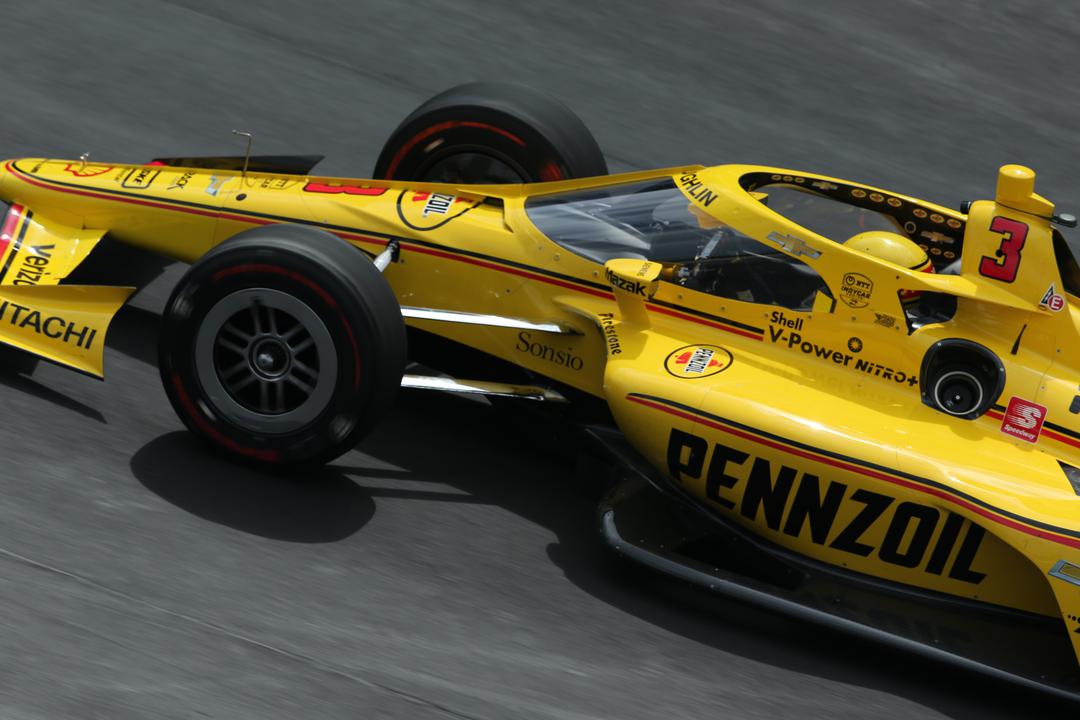 Rinus VeeKay remains on provisional pole position while Scott McLaughlin is set to start the Indianapolis 500 from 26th after a qualifying gamble which failed to pay off.

Team Penske opted to send McLaughlin and also Josef Newgarden for a second run with both sitting just outside the top 12 cut-off to make it through to the second day of qualifying, but the former’s pace got even worse.

Newgarden, however, got saved by a second yellow flag period for rain/lightning just as he went out onto the circuit again, meaning he will indeed start next weekend’s 200-lap race from 14th position, one above where his New Zealander team-mate had been before the #3 Chevrolet’s opening time was withdrawn.

The start of the Day 1 Qualifying session had been brought forward by an hour due to forecast rain and, somewhat coincidentally, the chequered flag ended up coming approximately an hour earlier than originally scheduled also, once it became apparent that the weather was not going to clear sufficiently for more laps.

It locked the Dutchman in the #21 Chevrolet into provisional pole ahead of tomorrow’s Top 12 Qualifying and a Fast Six, although that was hardly in doubt anyway given the conditions after the first runs were done, while Will Power (#12 Penske Chevrolet) was through in 11th.

VeeKay had been fastest once everyone had been given the opportunity to go for a run, from McLaren SP team-mates Pato O’Ward (#5 Chevrolet) and Felix Rosenqvist (#7 Chevrolet), then Alex Palou (#10 Chip Ganassi Racing Honda), Tony Kanaan (#1 Ganassi Honda), and Jimmie Johnson (#48 Ganassi Honda).

The rest of the top 12 at that point, with more than four hours in the session remaining, was Ed Carpenter (#33 ECR Chevrolet), from Marcus Ericsson (#8 Ganassi Honda), Romain Grosjean (#28 Andretti Honda), Scott Dixon (#9 Ganassi Honda), Power, and Newgarden (#2 Chevrolet).

McLaughlin was first outside the dozen who were provisionally into the second day of qualifying while Takuma Sato (#51 Dale Coyne Racing w/ RWR Honda), who had been fastest on each day so far, was without a time as punishment for a bizarre impeding incident with Marco Andretti.

Marco Andretti (#98 Andretti Herta w/ Curb-Agajanian Honda), Castroneves, and Herta all subsequently improved on lowly positions, the latter having not set a time on his first run due to an engine problem.

That would have made McLaughlin nervous given he was waiting in Lane 1 and about to give up 15th position for a second run, when rain which had threatened for hours finally started to fall.

That triggered a yellow flag and a lightning hold with 3hr 35min to go, interrupting a run for Sage Karam (#24 Dreyer & Reinbold Racing Chevrolet) as McLaughlin sat at the head of Lane 1.

Karam thus got the first run when the session finally resumed over 90 minutes later and he took up 23rd position, before McLaughlin was dispatched.

Worse still for Penske, Newgarden was next in the queue, but when he went out, another yellow flag was called due to lightning in the vicinity and the session was neutralised once again, with a scheduled 1hr 49min remaining.

There would in fact be no further running, giving Car #2 a reprieve and locking in positions 13 to 33 on the starting grid.