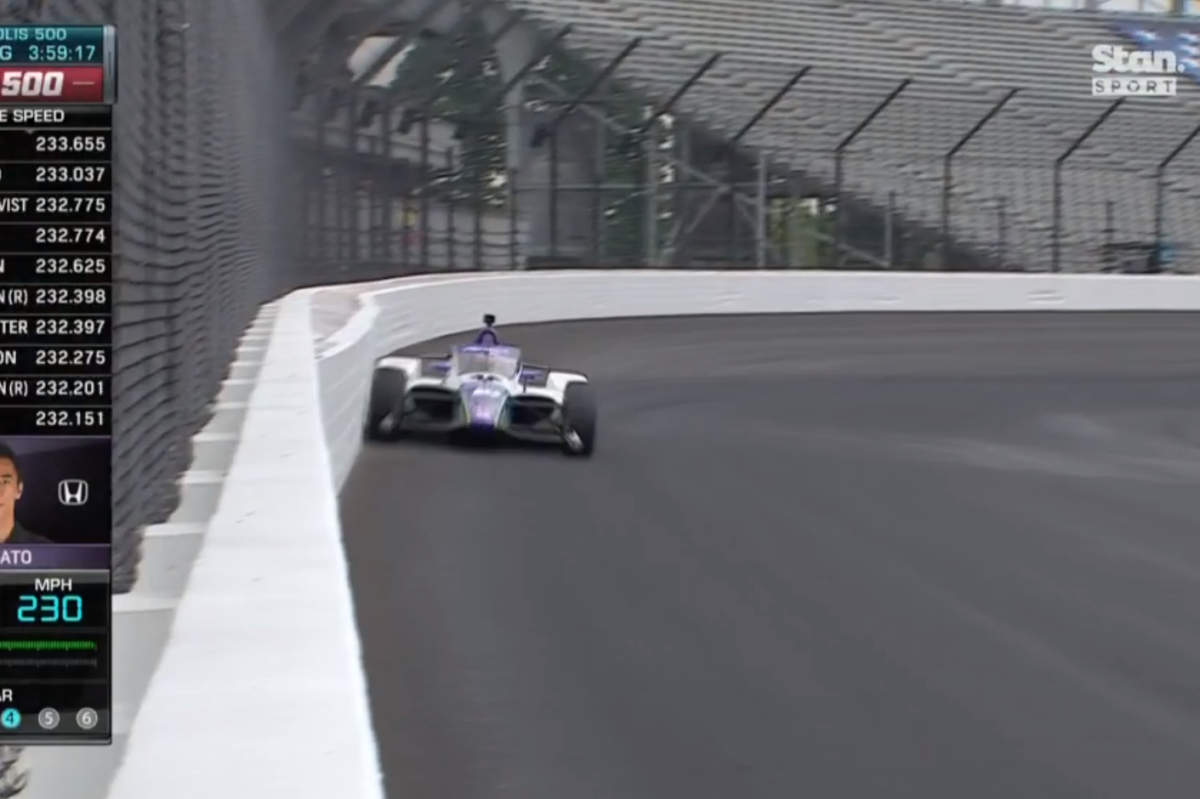 Takuma Sato has recounted his hair-raising brush with the wall during Day 1 of qualifying for the Indianapolis 500.

The two-time Indy 500 winner had his first run invalidated as punishment for a bizarre impeding incident that Marco Andretti was on the wrong end of, but then scraped into the top 12 which will fight for pole position on the following day.

That scrape was not just metaphorical but also literal, Sato leaving a mark on the barriers exiting Turn 2 on the third lap of his second and final run.

However, the #51 Dale Coyne Racing w/ RWR Honda survived the contact, and the Japanese driver set the 12th-fastest four-lap speed.

“It’s qualifying, so you’ve got to be flat through there,” he explained.

“Two things happened: of course, after I hit the wall or brushed the wall, shall we say, if the car starts to wiggle, it means your drivetrain has been damaged and we should abort it.

“[You] also look at the tyre pressure; if there’s any indication of weakness on the tyre pressure down the back straight, then you should abort it too because of safety reason to go to Turn 3.

“Neither thing happened, so obviously, when I brushed the wall, there’s two choices: whether to go flat or not.

“As I said, it’s qualifying. I decided to go flat, and then basically it saved me in the bubble, but it was in P12.

.@TakumaSatoRacer makes contact with the wall in turn 2 during his second qualifying attempt but doesn’t lift.

Sato has still not clearly explained how it came to be that he was on the race track as opposed to the service lane as Andretti came through for his warm up lap, although his team owner Dale Coyne suggested it may have been a simple case of absentmindedness at the end of a high-pressure couple of minutes.

However, the driver who had been fastest on each of the preceding three days of track activity had no complaints about getting pinged.

“What an eventful day for us,” noted Sato.

“Going through the first qualifier was not expecting that speed, to be honest.

“We didn’t participate in morning practice session for the preparation for the qualifying, but the conditions obviously drastically changed since yesterday. Clearly, we miscalculated.

“Then, of course, there was an incident on my in lap; that interference through Marco’s warm up lap.

“Obviously, IndyCar gave me a penalty, which is totally fine; interference. So, yeah, I got that penalty and then, obviously, completely no time and then do it again.

“Now, usually going first in warmer temperature, it is challenging, but today we fortunately went faster and then just get into the P12.

“In the end we prayed for favourable weather, but I think in the end the team did a great job. P13 and 12th, that’s showing that the boys really prepared.”

As Sato noted, team-mate David Malukas is locked into 13th on the starting grid for next weekend’s race.

The IndyCar rookie had got himself into 12th with his second run, only to immediately be pushed out of the cut by Sato.