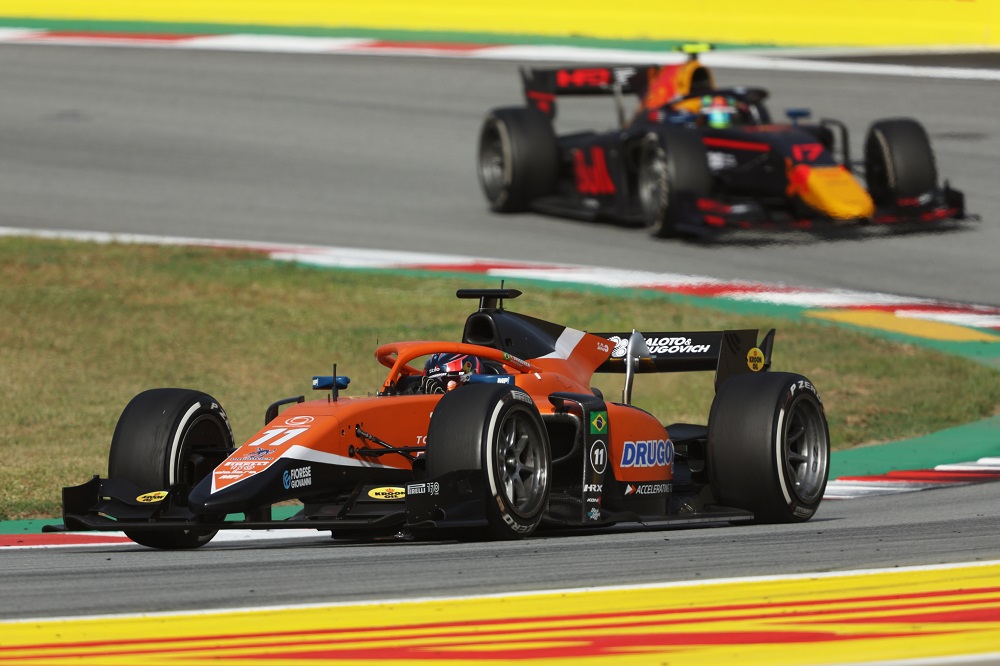 Felipe Drugovich led every lap of the Formula 2 Sprint race in Spain to claim victory as Jack Doohan chalked up valuable championship points.

The Brazilian made the most of a strong start to take the lead, showing a clear pair of heels throughout in a commanding performance.

His path to the front was eased when pole sitter Callan Williams stalled on the grid at the start of the formation lap, the Australian pushed into the pit lane where he would take the start.

Jakes Hughes inherited the effective pole position, but a sluggish opening lap saw him fall to fourth once the race began.

Doohan climbed a spot on the opening lap to sit eighth, the last of the points paying positions, having effectively started ninth owing to Williams’ fate.

Chasing Daruvala, Vips spun out on Lap 6 at Turn 4, burying his car in the gravel after losing the back end of the car.

Racing resumed as the field began Lap 9, Iwasa shaping up for a move into Turn 1 but not close enough to challenge Drugovich ahead.

By the time DRS opened up, the field had spread to the point it did little more than generate a long train through the bottom half of the top 10.

Having shaped up for a move at the restart, the lead battle quickly evaporated as Drugovich escaped up the road to the tune of nearly two seconds from Iwasa after 16 of the 26 laps.

The Japanese driver found himself slipping into the clutches of Sargeant, who was well within DRS range as they commenced Lap 17.

In the closing laps, Hughes struggled to find any grip, losing out to Doohan who climbed to sixth on Lap 22.

Vesti followed a lap later as the midfield queued up to put a move on the Englishman as he quickly slid down the order.

Liam Lawson passed Marcus Armstrong with three laps remaining, the two Kiwis side by side down the front straight as the pair moved by Hughes.

Drugovich went on to win unchallenged, taking victory by more than two seconds over Iwasa with Sargeant in third.

Doohan was sixth to pick up some valuable points while Williams recovered to 15th at the chequered flag.

Victory for Drugovich also saw the Brazilian take over the championship lead from Pourchaire, who finished fifth at the end of 26 laps of racing.

Sunday’s Formula 2 Feature races, which will see Doohan on pole, begins at 19:35 AEST.