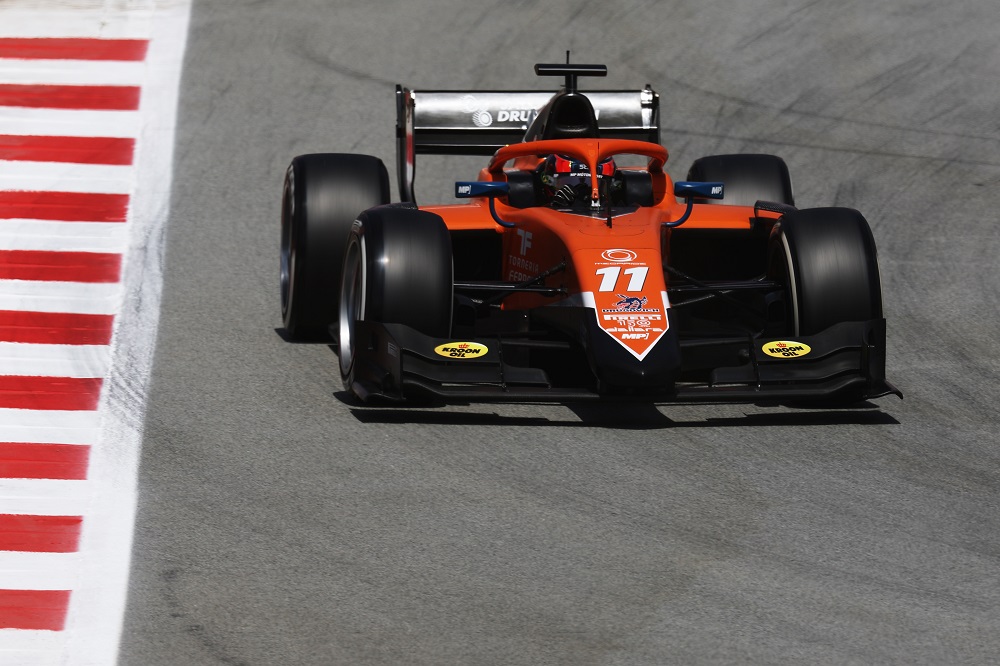 Felipe Drugovich has delivered one of the greatest drives in Formula 2 history to charge from 10th to win the Feature race in Spain.

The Brazilian dominated the affair, rising through the field early before driving home his extending his advantage after passing Jack Doohan who chalked up his maiden podium.

Doohan started well, heading the field into the opening corner from Frederik Vesti and Juri Vips, who dropped from second to third off the line in a well-behaved opening to the 37-lap encounter.

At the end of the opening lap, the pole sitter held a one second advantage over Vesti, the front of the field beginning to string out.

Jehan Daruvala in fifth was the first runner on the alternate strategy, starting on the hard tyres versus the softs for everyone around him.

However, the Indian’s race ground to a halt on Lap 3, stopping on track at Turn 7 to draw the Safety Car.

Doohan controlled the field to the restart on Lap 6, enjoying a strong advantage that left him unchallenged into the Turn 1.

Third placed Vips stopped at the end of the lap, the first to take to the lane for his compulsory stop.

It was a slow stop, the Red Bull youngster emerging behind Jake Hughes who’d also opted to pit.

Liam Lawson headed in next time around having climbed to sixth after starting 16th in just nine laps.

Next time by, Logan Sargeant stopped from third, the American rejoining well clear of Lawson.

Up the road, Vesti was called in by his team on Lap 11, feeding back out in front of Sargeant to effectively maintain his position.

It left Doohan out from with a 4.5s advantage over Drugovich who’d climbed up the order as those around him had pitted.

With good pace, there was comparatively little risk for the Australian who was in a position to monitor the pace of those around him, boxing as his lap times dropped off, and emerge with fresher tyres.

He ultimately pulled the trigger on Lap 12, rejoining in ninth as the first driver to have completed his stop, some 29s back from new leader Drugovich.

The Brazilian stopped at the end of Lap 17 to swap his soft tyres for the hard rubber, having missed the initial call to stop a lap earlier.

It was a slow stop though the MP Motorsport driver still slotted back out behind Vesti in ninth, though an effective third once the pit cycle completed.

On Lap 20, Drugovich put a move on Vesti at Turn 1, the Sprint race winner immediately setting off in pursuit of Doohan ahead with a five-lap tyre advantage and 17 laps remaining.

However, the Sprint race winner faced a nervous future, stewards announcing they’d investigate a pit lane infringement after the race.

With 15 laps remaining, the traffic that polluted the gap between the effective race leaders was cleared leaving nothing between Doohan and Drugovich.

By Lap 26, the leaders were together, the championship leader comfortably in DRS range as he began to attack.

Almost resigning himself to his fate, Doohan offered no defence when Drugovich used DRS to seize the lead as they began Lap 28.

The gap between them quickly opened, motivated by the looming threat of a post-race penalty for the new leader.

He’d opened an advantage of more than three seconds in as many laps after passing Doohan, the only driver lapping in the 1:35 bracket.

Drugovich went on to win in commanding fashion, his margin of victory 5.6s at the flag over the Alpine Academy member.

Vesti was a full 23s back in third, holding on over Logan Sargeant who resisted the hard charging Clement Novalak.

Drugovich now leads the Formula 2 Championship by 26 points as the competition heads to Monaco next weekend.