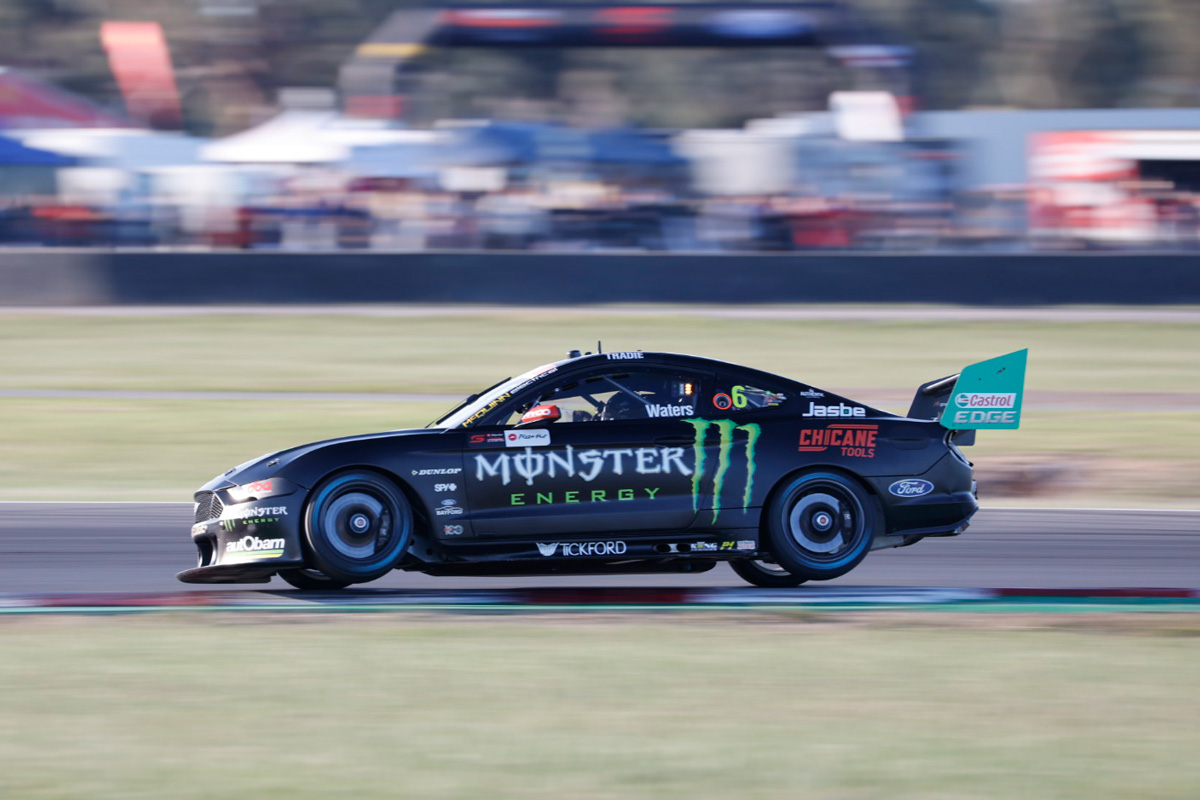 A superior start and some stout defence, both after his compulsory pit stop and also on the final lap, was crucial as Waters guided his #6 Monster Energy Mustang home for Tickford Racing’s first victory of the season.

Pole-sitter Van Gisbergen spent all but the first two corners of the race in second position, officially or effectively, and took the chequered flag exactly 0.4000s back after 36 laps in the #97 Triple Eight Race Engineering entry.

However, his runner-up finish was not for lack of trying, with the hits at the last two corners breaking the left-hand steering arm in his Red Bull Ampol ZB Commodore.

A fuel-starved David Reynolds got home in third in the #26 Penrite Mustang, collecting the five bonus points for the fastest lap, with the top five rounded out by Walkinshaw Andretti United’s Chaz Mostert in the #25 Mobil 1 Optus ZB Commodore and Lee Holdsworth in the other Penrite Racing entry.

In the drivers’ championship, van Gisbergen leads by an enlarged 196-point margin over Anton De Pasquale.

The gap between Waters and van Gisbergen quickly closed, with Brown swiping the rear of the former’s #6 Mustang before slotting into second.

However, van Gisbergen criss-crossed him as they exited Turn 2 to regain one spot, leaving the Erebus Motorsport driver third, from Mostert and Holdsworth (#10 Mustang).

Reynolds got into the rear of De Pasquale’s #11 Shell V-Power Mustang on Lap 2, thought better of trying to go on with the pass, then made the overtake for sixth on Lap 3 as they ran from Turn 2 to Turn 3.

In doing so, he made room for Scott Pye (#20 Nulon ZB Commodore) and Brodie Kostecki (#99 Boost Mobile ZB Commodore) to follow, with De Pasquale shuffled back to ninth.

Reynolds gained another spot when he passed team-mate Holdsworth on Lap 6, as Waters enjoyed a lead of around a second over van Gisbergen.

Mostert was the first of the top five to pit, for a set of rears on Lap 12, before Brown filed into the lane on Lap 13.

Erebus opted for working side tyres but dropped Car #9 before the new rear was fully fastened, apparently due to a clutch issue.

That led to a bigger drama, the wheel in question being pulled off when Brown tried to exit the box, and he would ultimately cop a drive-through penalty.

Van Gisbergen had made some ground on #6 before drifting back to more than a second behind when he came in for another set of rears on Lap 14, and Tickford responded by calling Waters in for the same stop a lap later.

Waters got back out just ahead and managed to hold on to the effective lead when he staved off van Gisbergen at Turn 3, while Mostert was circulating a position back from #97.

The Grove Mustangs pressed on all the way until Reynolds pitted at the end of Lap 24, taking working side tyres and resuming in an effective fourth.

Holdsworth peeled off a lap later and was fitted with fresh tyres on all corners of Car #10, although a snag on the left-rear made that an even longer stop than it should have been.

With fresher rubber, Reynolds picked off Mostert and Holdsworth got by Brodie Kostecki on Lap 27, as van Gisbergen continued to stalk Waters.

The Triple Eight steerer had a look on the final lap at Turn 7, then made contact in showing the nose at Turn 11, and again at Turn 12, the very last corner of the race.

Waters hung on for victory, meaning van Gisbergen took second, while Reynolds managed to finish third despite being told to save fuel in the closing stages.

Mostert ended up fourth and Holdsworth claimed fifth all-told, having gone underneath Pye on Lap 32 at Turn 3.

Behind Pye, the top 10 was rounded out by Brodie Kostecki in seventh, then De Pasquale, Heimgartner, and Feeney.