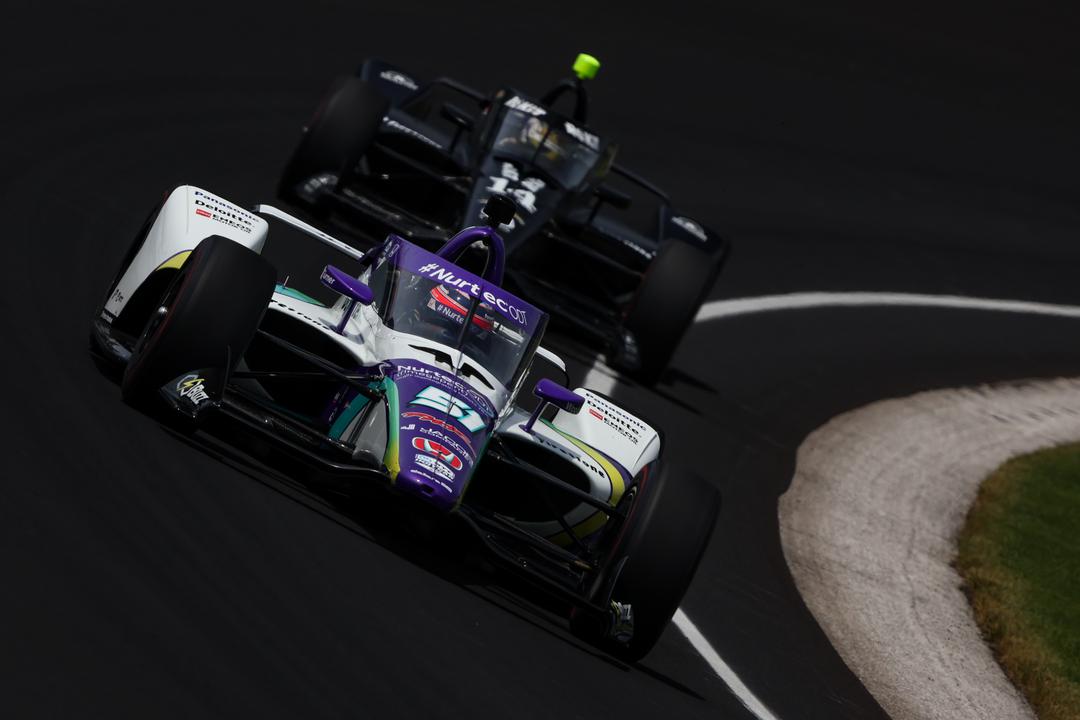 Takuma Sato has set the very best pace on Fast Friday at the Indianapolis 500 while Tony Kanaan went quickest in terms of four-lap averages.

IndyCar rookie David Malukas was on top on four-lap averages, twice over, before fellow Honda steerer Kanaan’s effort in the final minutes in the #1 Chip Ganassi Racing entry which produced a 230.517mph (370.981km/h) for the run.

Scott McLaughlin was ninth on the timesheet but promising on multi-lap runs, with three good laps in the #3 Team Penske Chevrolet before he was told to ease off due to traffic.

It was a particularly challenging day at the Brickyard due to wind which sometimes gusted at more than 60km/h, and the first hour also featured an unusual stoppage.

Helio Castroneves (#06 Meyer Shank Racing Honda) was the only driver to have set a somewhat representative lap, a 228.229mph (367.299km/h) when Race Control lost power, leading to a Caution period of around 30 minutes.

Not only did the first lap put the Mexican into second position, it was the first genuine four-lap run of the session, even if there was a big drop-off in speed by the time he had completed the last of those laps.

Jimmie Johnson (Chip Ganassi Racing Honda) brought about a second Caution when he glanced the wall in the 86th minute, although he was able to drive Car #48 back to the pits, before McLaughlin and Marcus Ericsson (#8 Ganassi Honda) made some notable runs.

McLaughlin went mid-228, low-230, and low-228 on the first of those runs, possibly distracted by the presence of debris in the form of a plastic or paper bag when he went through Turn 2 on the third lap.

While few were bothering to go out as the wind gusts got worse, Malukas (#18 DCR w/ HMD Motorsports Honda) moved into second as far as four-lap averages were concerned with a 228.325mph (367.453km/h), run late in the third hour.

His team-mate Sato (#51 DCR w/ RWR Honda) had topped each of the first two days of track activity while not bothering to go for a qualifying simulation, but showed he was no slouch in that regard with a 231.821mph (373.080km/h) in the first half of the fourth hour.

Little happened between Cautions for a track inspection, debris in the form of another bag, and then a squirrel on the track, and Team Penske even started packing up its pit stands with just over an hour to go.

Then, almost four hours after his prang, Johnson was finally back onto the race track.

Action resumes late tonight (AEST) with more practice, before Qualifying to set positions 13 to 33 kicks off at the slightly earlier time of 01:00 AEST on Sunday morning.