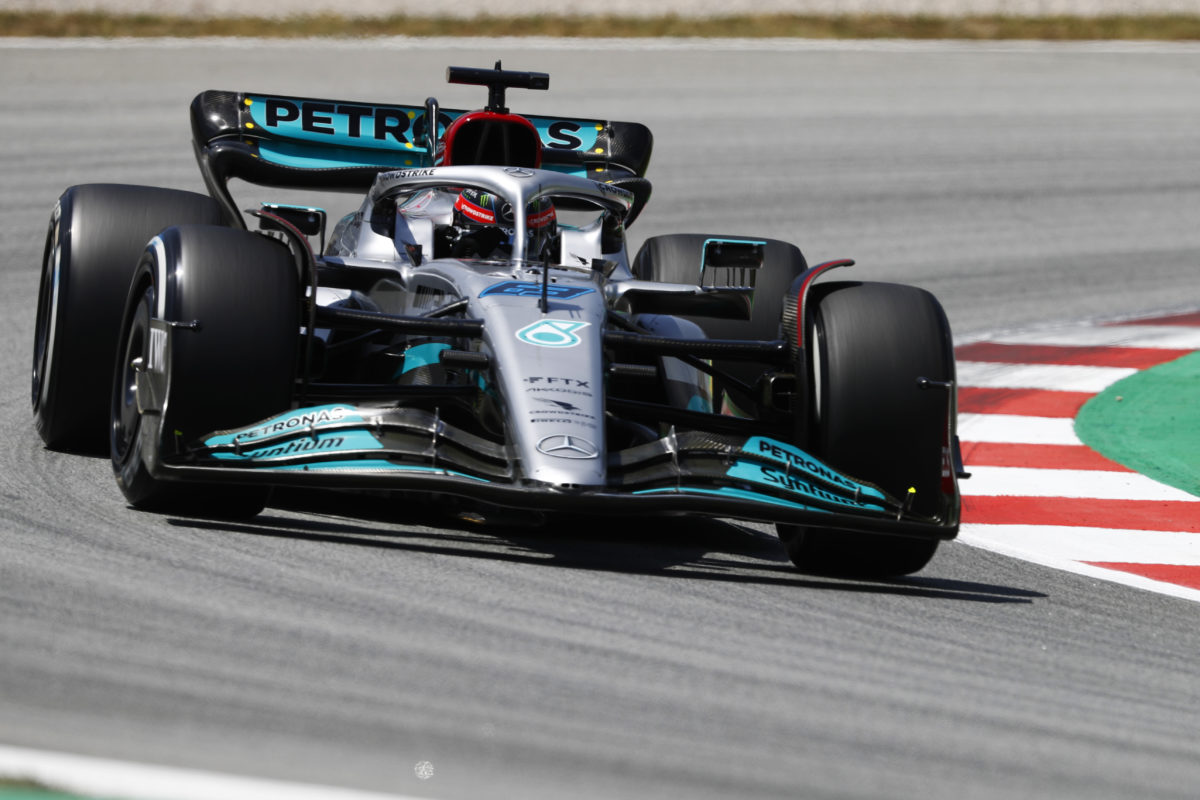 Mercedes drivers Lewis Hamilton and George Russell have cut positive figures following a strong showing by the duo during practice for the Formula 1 Spanish Grand Prix.

Russell logged the second-fastest time in Free Practice 2 and Hamilton third, building on the promising pace seen earlier in the day.

The team brought with it a raft of updates including a new front wing endplate, deflectors around the rear wheels, and changes to the car’s floor.

“We definitely don’t have the porpoising in the straight which is good but we’re still experiencing a bit here and there in the corners which ultimately you need to dial out.”

Hamilton too was positive following the day’s running which saw him just 0.204s slower than Charles Leclerc.

“We’re not the quickest yet but I think we’re on our way.

“It’s the first time we’ve driven down the straight without bouncing.

“We still have some bouncing, but it’s way better.

“It’s still tough out there with the car, but it’s been much nicer than before,” he added.

“So really grateful for those upgrades, we now just need to try to fine-tune them into the next session.”

Porpoising has been a major concern for Mercedes throughout the early part of 2022, with the team citing it as a major hurdle in unlocking the potential of the F1 W13.

With both Russell and Hamilton towards the front, and reporting less bouncing, it suggests a step has been taken, though it was a similar story in Miami last time out only for the porpoising to return on Saturday.

Heading into qualifying through, Russell is confident that Mercedes can maintain its position towards the front of the field.

“I see no reason why we can’t be as far away from the front as we, as we showed, if not a little bit closer,” he said.

“But there’s differences with power modes and stuff. I think Ferrari and Red Bull were in their lowest power modes, so they’ve got a bit on us there.

“It’s tricky. Degradation was massive for everybody, and that’s going to be what’s going to make or break this race on Sunday, so that’s where we’re focused on tonight.”

Tyres were also a primary consideration for Hamilton.

“Our tyres are struggling, I would say in general this year, just in terms of overheating,” he explained.

“I think everyone’s in the same boat with that, it’s just you can’t attack in these temperatures, you have to do a lot of management.

“It feels like more management than we’ve ever had to do in the past.”

Preparations for the Spanish Grand Prix continue with Free Practice 3 at 21:00 AEST tonight.