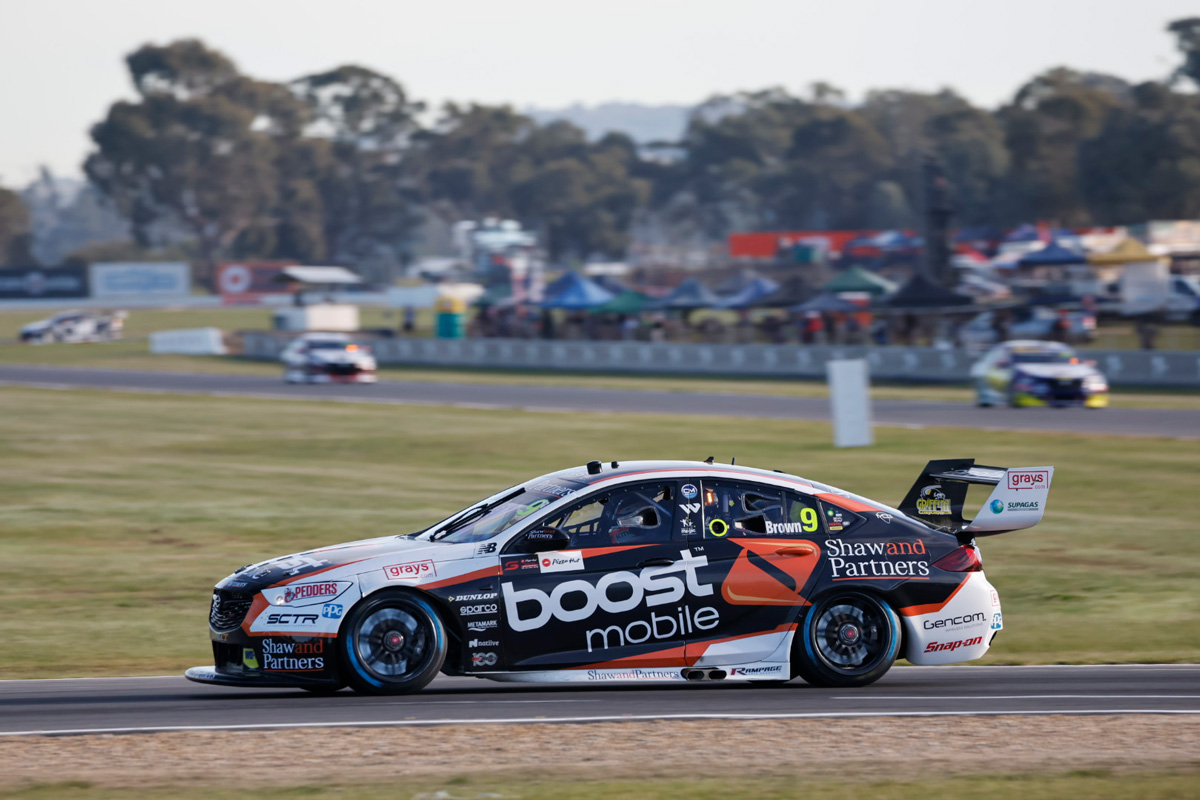 A last gasp flyer from Will Brown has seen the Erebus Motorsport driver edge Grove Racing’s David Reynolds in Practice 1 at the Pizza Hut Winton SuperSprint.

In what was a relatively uneventful first 30-minute session at Winton Motor Raceway, a 1:18.7206s from the #9 Holden ZB Commodore put Brown a mere 0.1112s clear of #26 Ford Mustang pilot Reynolds.

“The Boost Mobile Commodore was feeling fantastic then,” said Brown.

“I rolled out for the first practice and probably didn’t put the best lap together and Tom [Moore, engineer] said we were third, so I was really happy with the overall set-up of the car.

“We had a great test day here only a week ago, so probably a bit of an advantage. To end up P1 after having a couple of tough rounds, it’s great. Hopefully we can roll that through this weekend.

“If we can do the same as this session [in Practice 2], I’d be pretty happy. That’s the focus. The car set-up is pretty good.

“At least when you roll out and the balance is just a few little tweaks, and you’re not throwing wholesale set-ups at it.

“We’ll do a few small tweaks and hopefully we’ll be faster.”

Although Brown’s best was at the death, the quickest times by Reynolds, Cameron Waters, Mark Winterbottom and Scott Pye – who occupied second through fifth – came early on.

Boost Mobile-backed Brown was the first of those to make a mistake, bowling a wide out of Turn 6 and ending up in the grass.

Off the back of a recent test, Grove Racing returned Winton Motor Raceway with a bundle of confidence. Evidence of that was Reynolds’ pace-setter on a 1:18.8318s, which held sway initially.

In frosty conditions, Winterbottom found pace to edge his way up to fourth. Shortly thereafter, team-mate Pye put in a lap to move him to fifth.

As the session wore on, few looked likely to challenge Reynolds. With just 10 minutes left in the session the #26 still held top spot over Waters and Brown.

Will Davison (#17 Shell V-Power Racing Team) was the surprise of the field, bogged down in 25th and one second off the leading pace, although Dick Johnson Racing opted not to put the two-time Bathurst 1000 winner on new tyres.

Similarly, team-mate Anton De Pasquale in the #11 was only 20th, while Broc Feeney (#88 Red Bull Ampol Racing) found himself 23rd.

In the dying seconds, Brown rose to the top, though there was little in the way of movement elsewhere in the top 10.

By the session’s end, Victorian teams occupied first through 12th while van Gisbergen was the first of the Queensland-based cars in 13th.

Practice 2 at the Pizza Hut Winton SuperSprint kicks off at 10:45 local time/AEST.