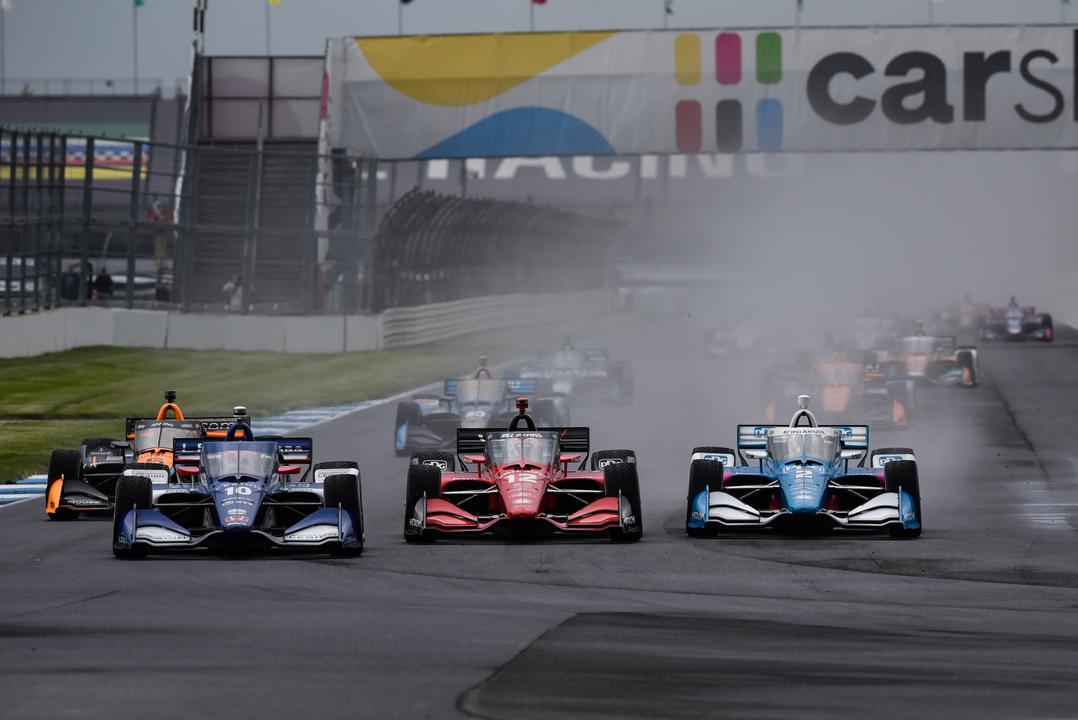 (left to right) Alex Palou, Will Power, and Josef Newgarden on Lap 1 of the Grand Prix of Indianapolis, in which only one of those three would finish on the lead lap

Will Power was happy to ‘survive’ a wild Grand Prix of Indianapolis, where a third placing saw him take over the IndyCar series lead.

He had been fourth in the standings ahead of the first Brickyard road course event of the season, behind Alex Palou (Chip Ganassi Racing), and team-mates Scott McLaughlin and Josef Newgarden.

None of those three would finish on the lead lap, with Palou spinning early, McLaughlin looping Car #3 while leading under the sixth Caution period, and Newgarden getting unloaded in contact with Alexander Rossi and Jack Harvey.

Power had qualified on pole but fell towards the back of the top 10 around the halfway mark, before emerging in third for the run home, keeping his nose clean when many could not as the weather wreaked havoc.

“In those sorts of days, you’re thinking points,” said the Queenslander.

“When you see Palou out and then you see Newgarden out… you see a couple of main contenders that you’re going to be fighting and you start thinking a little bit that way.”

Power has been infamously unlucky during his IndyCar career, notwithstanding that he won the series in 2014 and the Indianapolis 500 in 2018.

It was a point he made when now former team-mate Simon Pagenaud seemed to suggest that the veteran has mellowed.

“Yeah, I’m not having issues with the spark plugs and brakes and – what else might happen? – car not starting…,” said Power.

The weather changed almost constantly during what turned out to be only a 75-lap race, due to time-certainty, and Power said conditions at the end were arguably bad enough to warrant a red flag anyway.

“At the end there, man, you could not see a thing,” he recounted.

“There was a spray in front of me. I don’t know how it was behind one car but [I was behind] just two cars; I couldn’t imagine being back in 10th.

“You don’t know if someone’s braking early, or you’re kind of looking to the fence, just to get a reference, kind of lift early.

“But, you don’t want to lift too early because no one could see from behind.

“[It was a] Pretty crazy day, one to stay your toes and know when to pick the right tyre and definitely not overdo it.

“Yeah, real happy with third, with a day like that.

“It was just survival.”

The Month of May steps up another gear with practice for the Indianapolis 500 starting tonight (AEST).

Both days of qualifying, this weekend, and the race itself will be shown live and ad-free on Stan Sport.