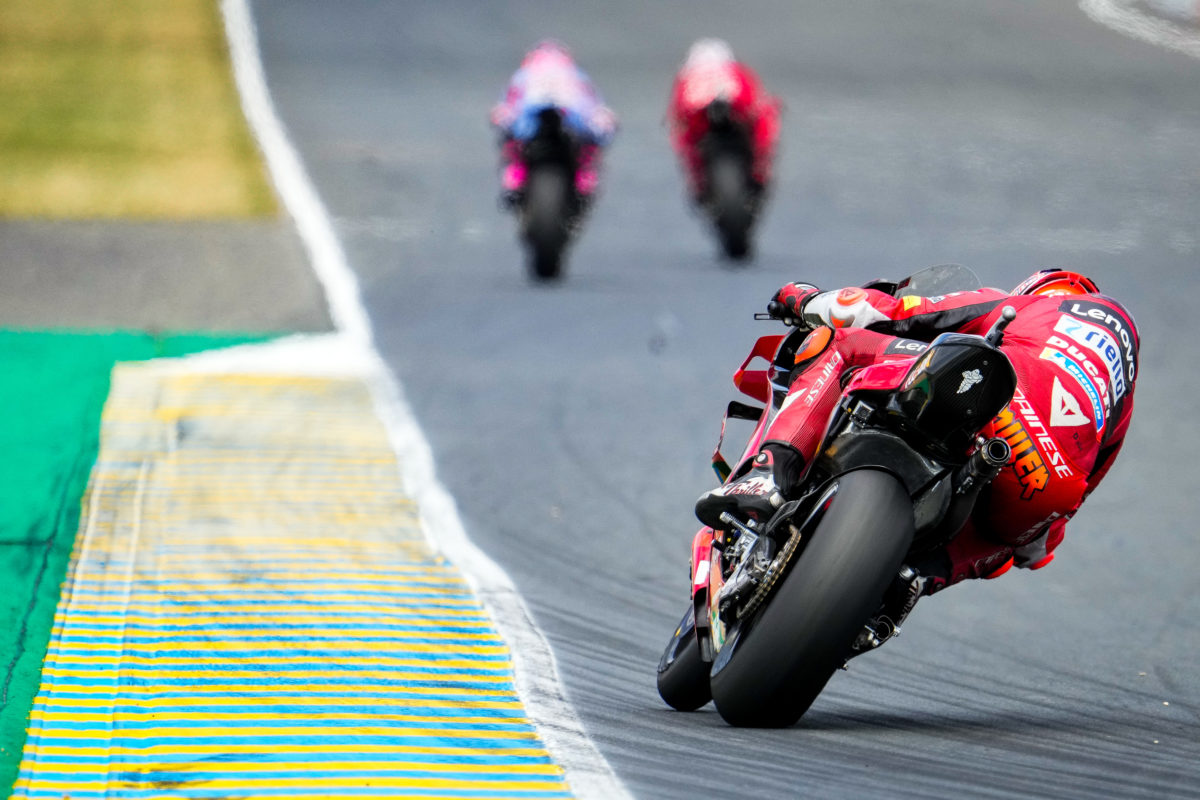 Jack Miller runs third at Le Mans to Enea Bastianini and Francesco Bagnaia, before the latter crashed out

Jack Miller believes it “makes sense” that Ducati would replace him with Enea Bastianini because he is Italian and has won three races this year.

Miller’s future at the factory Ducati Lenovo Team has been considered under threat since at least as far back as last year’s Red Bull Ring races, when Pramac Racing’s Jorge Martin got a breakthrough win and backed it up with a third place a week later.

By the end of 2021, another rookie of that season, Enea Bastianini had put his hand up after two podiums on a 2019-spec Ducati Desmosedici.

The Gresini Racing rider’s manager, Carlo Pernat, stated at the start of this year that there was a “99 percent chance” that Miller would leave the factory team at season’s end, and that prediction is looking on the money at this stage.

It was only two months later that Bastianini got his breakthrough MotoGP victory in the season-opening Qatar Grand Prix, on a 2021-spec bike, and he remains the only multiple race winner so far in 2022.

In the just-completed French Grand Prix at Le Mans, he stood on the step of the podium, or on the podium at all, for the third time in the seven rounds which have been held so far this season.

Miller finished second, having led initially then inherited a spot when his team-mate Francesco Bagnaia, who already has the seat again next year, crashed in pursuit of Bastianini.

On a weekend when he was tipped by one Italian media outlet to sign with KTM, ‘Jackass’ was asked about what the result meant for the vacant Ducati Team ride for 2023.

He was brief, but honest: “I don’t know what you want me to say; I said it all.

“I mean, put two and two together; he’s won three races this year and he’s doing a fantastic job, he’s Italian so it makes sense, doesn’t it?” concluded the Queenslander before shrugging.

Summing up his race, Miller likened it to April’s Grand Prix of the Americas, when he also led early but faded somewhat to third as Bastianini came through to win.

“This little bastard has done it more than twice,” he noted.

“He’s done it plenty of times. He’s always strong at the end of the race, he’s got a good drive, he’s good on the tyres and he worked it well, he rode a perfect race.

“He started firing it in a little bit deep; I saw him towards the end of the race at Turn 8 getting quite close to the kerb and you can see his body went a bit central and I thought, ‘Alright he might be starting to struggle on the front’; meanwhile, I’ve been struggling for 12 laps.”

On Bagnaia, Miller added, “He was riding a good race and I thought he had the pace to go so I allowed him through.

“He sort of squared me up on the exit of [Turn] 7 and was trying to pass from the outside in 8.

“Of course, I can always try to jam it up the inside because I had the inside line blocked, but I didn’t want to disturb him and thought maybe we could pull away.

“He got in front and set about his pace – he had three laps that were decent – but then I saw he started to struggle on the right side in Turn 8, a little bit in the last corner and then when Enea came past and set to work on Pecco, I thought ‘here we go’.

“I saw him pass him [Bastianini] back at 8, then there was a bit of a scuffle and then saw Pecco come back on the track with a big old black line, completely out of the line, but obviously he was pushing a bit hard there and threw it away in the last sector.

“We could have had a Ducati one-two-three but it wasn’t to be.”

In the riders’ championship, Bastianini is third at eight points off the lead, Miller is fifth at a further 32 points back, and Bagnaia has dropped to seventh with his DNF.